Disgaea D2 comes out 10 years after the original and Laharl, Etna and Flonne are back once again, remastered and ready for all sorts of crazy action in the Netherworld. Is Disgaea D2 worth the wait?

Disgaea D2 hits home on the crazy and silly fun like the original but with much more of it. The original Disgaea 2 had moments in the story that were deep and meaningful but in D2 there is none of this. All that is left is mayhem, craziness, madness and the main character tuning into a girl but this is not something that makes the game unworthy of your time. Quite the opposite, NIS America have gone further back to the roots of the Disgaea franchise and wanted to make D2 something you remember because you enjoy laughing at every crazy moment not because of the beautiful storyline. 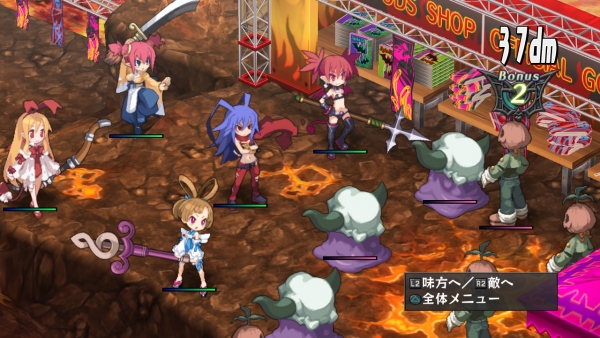 Prinny masochism, geo coloured seizures, character towers and character tossing are all back in D2 but with some added features as well. NISA have tried to add more to the game to make it feel fresh rather than just a remake and the added extras do that quite well. The Dojo system allows you to train your character in their proficiencies to make them even more powerful or boost them up in areas in which they lack. The Teacher and Student mechanic allows you to further customise your character classes by allowing students to learn skills from the teacher, while the teacher gets stat bonuses making them overall more powerful. The new monster system mechanic Mount which replaces the old Magichange helps spice things up for using monster classes and makes a powerful fighting monster-character duo. 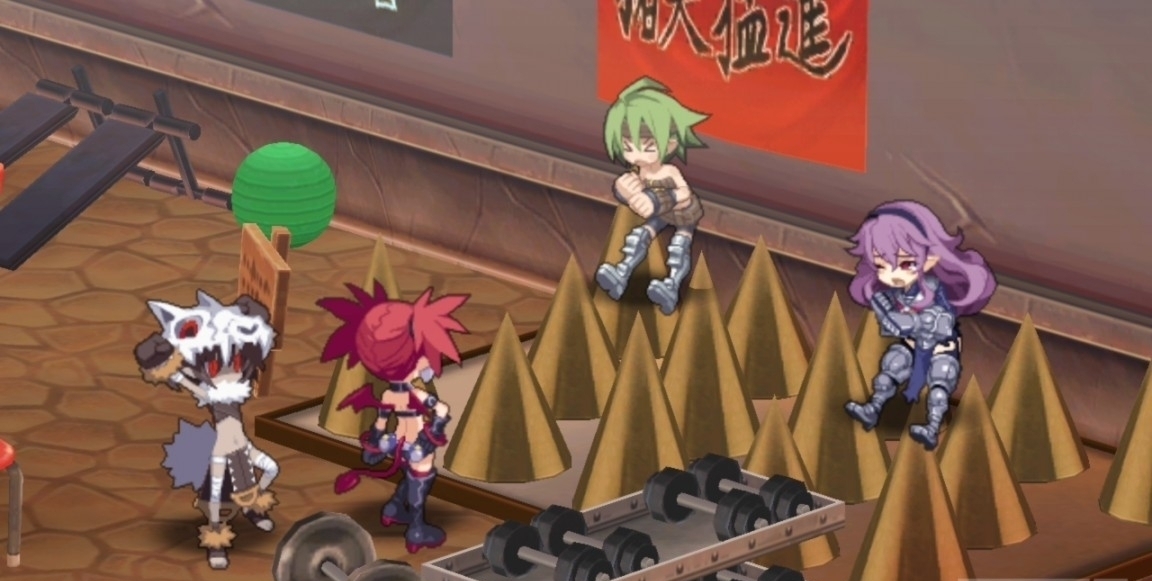 The demon dojo looks painful! All for the greater good..

Graphics in Disgaea games have never been known for their trend setting. In D2 they are sharper and clearer which is an improvement over the previous pixel based sprites (If you’re a graphics kind of person). The charm in D2’s graphics is the wide colour palette and the artistic style which is unique to the series. If you’re a fan of the older games you will love the new artwork and if you are a bit of a graphics nut you can probably still find it in your heart to love it.

D2 is a tactical grid based RPG all the way through. D2, like the previous games, have always done well within that genre and this time is no different. It is not looking to cater to the unknown. You will be finding yourself using many different systems, weapons, classes, skills, bonuses and more all while strategically thinking your away around the map. If you don’t like lots of systems and customisation down to the weapon names then D2 and the games in the series are probably not for you. If however, you do like grinding down to the teeth and being able to see every statistic and option D2 is a fantastic choice.

If you’re new to Disgaea, the battles work not turn by turn but instead they’re more team orientated. You choose which character you want to go together and execute the attacks at once allowing combos and team bonus attacks. In D2 the more a character likes another character the more help they will give automatically like defending an attack or also counter attacking a monster. You can of course choose to attack one character at a time but you will lose the benefit of doing massive amounts of insane damage.

D2’s customisation is a winner once again being able to use the Dark Assembly to create your party how you want after the tutorials. Making a couple of over powered fighters with lots of bonus stats or loads of weakling to team up together is completely your choice. You could even have a part full of monsters, how you customise your parties and their classes is down to you. Other options in the Dark Assembly allow you to vote for even more classes, increased item level (which cost more money) and cheats if you want to change the way the game plays.

The Item world makes its glorious comeback. Spend hours inside your favourite weapons and level them up so you don’t have to part ways because it’s getting a little dated. Get to the Item World Town at every tenth level and you can reach the Item Assembly allowing you to buff up the weapon or item even more and other cosmetic changes like the skin or name. While you are in the item world don’t forget to defeat the Innocents to use in other weapons and change their statistics. Getting to the top of the item worlds and increasing the difficulty in the dark assembly alone will allow you 100s of hours of gameplay and much replayability.

All the old mechanics you are fond of and familiar with in the Disgaea series are still there as well as a few new additions. Notably the biggest and newest feature to focus on is the Mount feature which allows your human characters to mount monster characters. This is a much better system than the Magichange system in the previous games. In the past monsters felt more of a burden to use if used for Magichange they would be unusable for that battle afterwards. However, Mount is not only reversible but it also protects the human character which is great for levelling new characters. All round it is a much more useful mechanic and a fun one at higher levels later in the game. 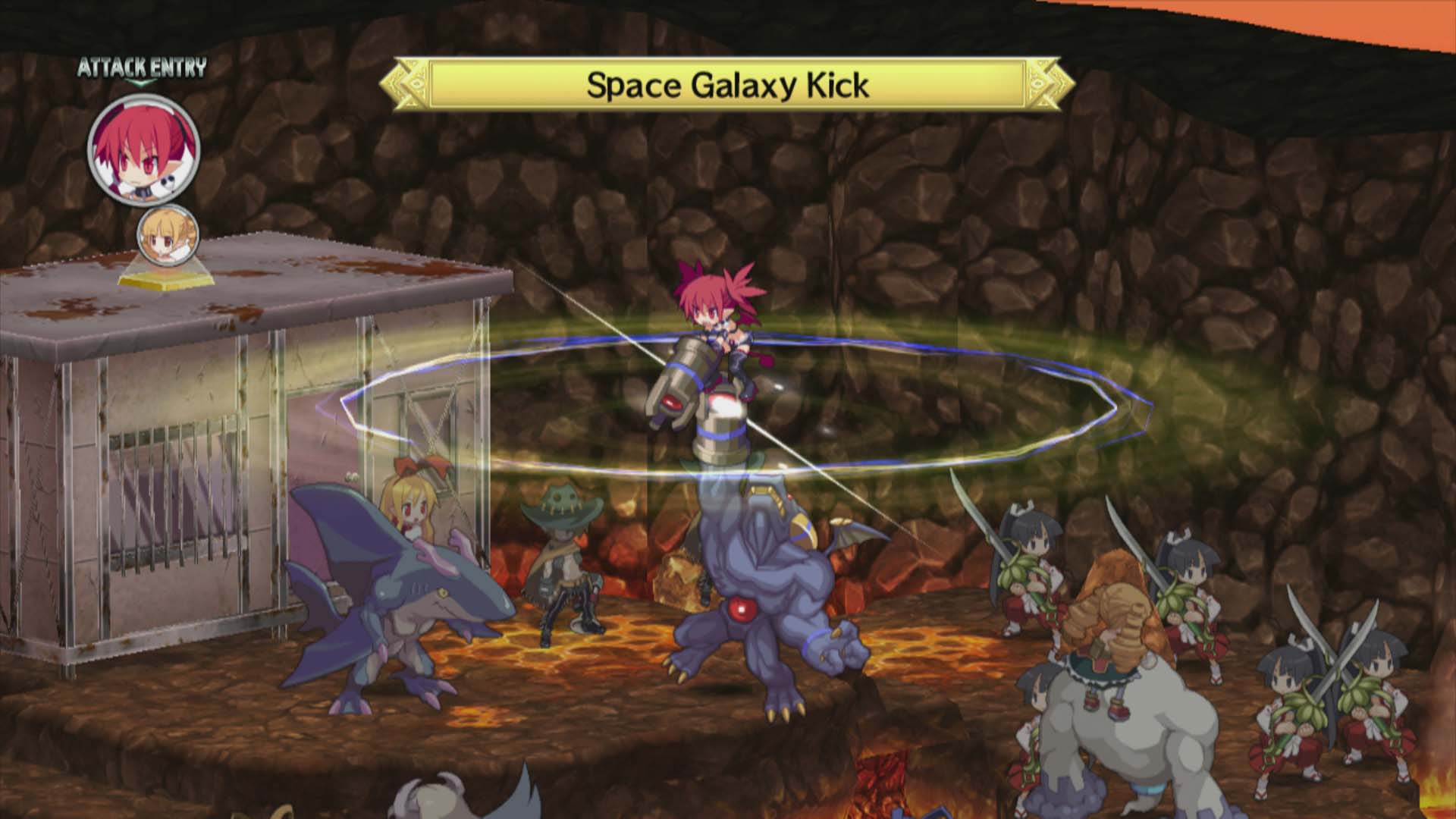 By the power of Grey Skull! The mount system can be powerful.

The only downside to the game would be the re-hash of assets. The environments are very similar to one another or overall very basic. This has been the same for most Disgaea games but being at the end of a current gen consoles it would of be good for it to push the limits a bit more than the series has been used to.

Overall the game delivers fantastically especially for fans of the series. You will enjoy every moment of the game and the humour within it. Being a fan of the series you will continue to love the grind with the new added features to change things up from the previous games. New players to the series will not have to worry about playing previous games to get D2 and will still enjoy the game but they might need to take a little extra time to learn the mechanics. Disgaea D2 stands at the top of grid based strategy RPG’s and will not fail to impress.

Have you played the game or the originals? Let us know what you think in the comments below.