When I heard Diablo III (3) was coming to the Switch my memories of playing the game at university came flooding back. Hours and hours were spent with friends grinding away for the best gear tackling dungeons and killing bosses with the total play time racking over 500 hours in the end. Coming back years later and being able to play the game on the go seemed like a dream come true.

Luckily, dreams were answered as the game is good as you might remember when you think back to the good old PC days. Blizzard has done a decent job at porting the game over to the Nintendo Switch but it is not without its downsides.

Rather than jump back into the game in full, we’ll explain how it adapts to the Nintendo Switch starting with the control scheme. As you can imagine there is a wide array of ways you can play Diablo 3 with either the Switch in handheld mode for one player, on the TV for one player or for two players by sharing a joy-con each. You can also play with local co-op across switch devices or online with others.

Starting with the TV mode, playing it with a friend using a JoyCon each work when you have the Switch docked into the TV but it is not the easiest way to play but it the most genius in how it has to work around the limited number of buttons. You can hit the control stick and a button to bring up a special console shortcut wheel.

You’d be much better off using the Pro Controller as it fits really well when you have more than one player in a local game. Furthermore, you can also bring together more devices that can play in local proximity to each other by bringing additional consoles without the need for an internet connection. You can of course still play online as well but when you are on the go, signal issues create a frustrating experience that is not only a problem for Diablo.

Still, in the end, the best way to play it on your own in the handheld mode as this is where the game shines and with the full set of expansions that includes Adventure Mode and Nephalim Rifts, there is plenty to keep you going for a very, very long time. There’s something about being able to play on the Sofa, in-bed or even on the toilet which makes the game great to pick up and put down whenever you like.

Controller scheme also works really well in handheld mode with keys being mapped to the most useful actions you’d expect for Diablo, I also really liked the fact the game was able to easily equip the best weapons on pick up or you can “quick-equip” recently looted items by pressing up on the JoyCon’s directional buttons that also worked not only for weapons and armour but also newly acquired skills. 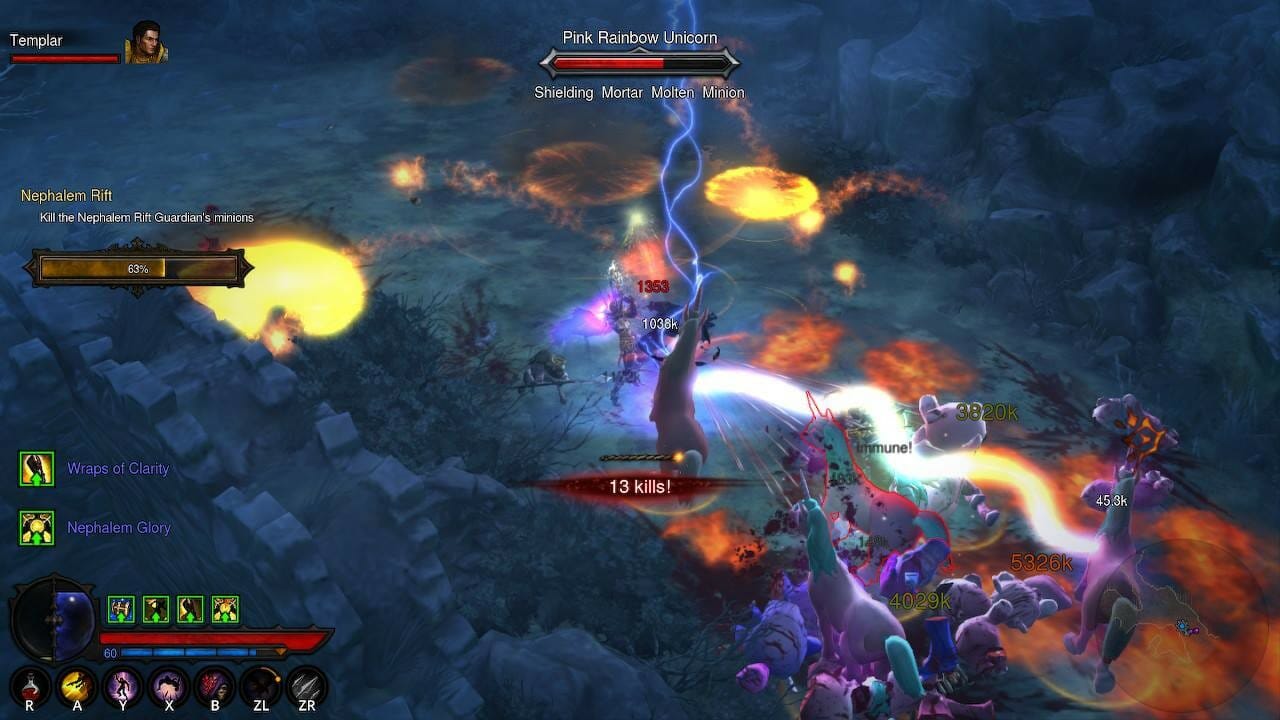 These minor tweaks make the game a hell of a lot more accessible on the smaller screen and set up. Of course no matter the set up it’s shy of the accuracy of the keyboard and mouse but for a console port, it’s a decent one.

Added to the fact that it also plays great on the TV means when you want that bit more screen space as some things are a little small on the handheld version you can just pop it into your dock and grab your Pro controller and go to town building up your characters and trekking through dungeons.

Playing both on your own or in co-op the game still looks fantastic after many years and on the Switch’s hardware. Battles are a chaotic mess of colours and animations that will bring you right back into the mix. Although smaller, the game is still nice and easy to grasp what is happening when the action starts in 720p when using it handheld or 920p when playing it on your TV.

If you’ve played the game before you’ll be reminded of each of the different classes you can play as including the newest Necromancer. Each one really shakes up the way you play the game and the tactics you need to implement when in combat. Upgrading and gaining new skills in possible as you level, with the runes adding a further additional layer to character progression.

What might seem quite an easy game to play, killing monsters, looting corpses and getting new weapons is actually deeper the more you are willing to go. Yes, you could keep it basic and player as the game comes but to get the most out of it, diving into the systems, upgrading weapons, dying your armour and more adds to your playthrough of the game across a number f different types of characters. It’s nice to kit out a class and then go start again with another tweaking you journey through the game.

If you want to skip the story campaigns you can do as Adventure Mode is unlocked from the start in the Eternal Collection. Meaning you can jump in at a quicker pace if you don’t want to follow the story missions. Diving straight into the never-ending loops of Bounties and Nephalem Rifts is up to you, more aimed at the more seasoned player than anyone who might not have tried the game before since the release.

There’s also some Switch exclusive features like being able to scan in Amiibo’s you have to open portals into the game and summon enemies to get some new loot from. You can also play as Legend of Zelda’s villain Ganondorf with an armour skin that works for any class that is also a nice little addition.

By the very making of its core, Diablo III is about repeating your way through endless dungeons collecting randomised loot, comparing weapons and armour for marginal improvements and adding your own flair to a handful of classes. The lure of being able to do this all over again but whenever and wherever you want with the option of co-op is enticing and well executed on a device with a semi-small screen.

What started off as a small joust into Diablo III for this review has ended up being some sleepless nights in bed playing the game for hours on end. There will also be many hours to come in what has been one of the best ports in recent times for the Switch. If you played Diablo in the past and have a Switch it’s recommended but with a warning that it will turn “just a quick game at 8 pm” into looking at the clock and realising it is 4 am.

Diablo III on the Nintendo Switch works really well both docked or in handheld mode. The control choices are pretty diverse but one-player handheld by far shines above the rest.