Hell has become one of those go-to levels for game design, being as exciting as the snow or desert area. There’s always some fire, brimstone, lava and possibly a pointy-horned demon cackling at the damned, with artists and designers very rarely straying from the same design of Hell which has been popular since doom paintings from Norman churches. Doom added some metal to the infernal mix and gave the demons some robot arms but the kingdom of the diabolical still stuck to the tried and true depiction of Lucifer’s domain. Devil Daggers keeps the twitch shooting of something like Doom or Quake but throws away the boiling pits of acid and goes much darker, with torrents of demons spilling over you as you shoot them away with blasts of blood and bone. The hellscape of Devil Daggers is an endless gauntlet of skulls and eldritch horrors, where success is fleeting yet tantalising, as the world leaderboard of fellow damned souls constantly reminds you that you can go that little bit further. Hell is other people in Devil Daggers and all of them are vying to beat your score by whatever means necessary.

The only thing you do in Devil Daggers is survive. Upon picking up the aforementioned blade, you are thrust into a blank arena where demonic spires and demons start to attack you from all sides. Using the powers of the Dagger, you can shoot a shotgun blast of bloody fragments if you click the left mouse button once or you can fire a steady stream of viscera if you hold the button down. Besides that and eventually unlocking a homing shot once you have collected 70 glowing gems, which drop from certain demons, that’s everything you can do in Devil Daggers. The movement is similar to a shooter from the 90s, with you strafing and jumping past clouds of skeletal horrors at high speed, as you desperately try to clear that spire before the giant screaming spider pops out and starts spewing acid everywhere. Once you get hit once, your run is over and you start the gauntlet of grotesquery again. When you first start Devil Daggers, you’ll probably last 15 seconds. After about 30 tries, you may get up to 30 seconds before a new demon comes out of the shadows and sideswipes you. You may eventually do that one minute long run and feel amazing then go back to never getting past 40 seconds. Devil Daggers is a grind, a slow process of mastering each wave of monsters before eventually pushing onto the next whirlwind of pain and then mastering that. Every enemy spawns on a timer and you are always in the same circular arena so you can memorise the position and timings of waves but you get overwhelmed that quickly that if you aren’t on the ball, it becomes impossible to quell the storm. It is not an easy game, nor is it one that will support you in your endeavours past the occasional ‘New High Score!’ pop up in the top left. You are here to suffer and die until you can push past the next obstacle. 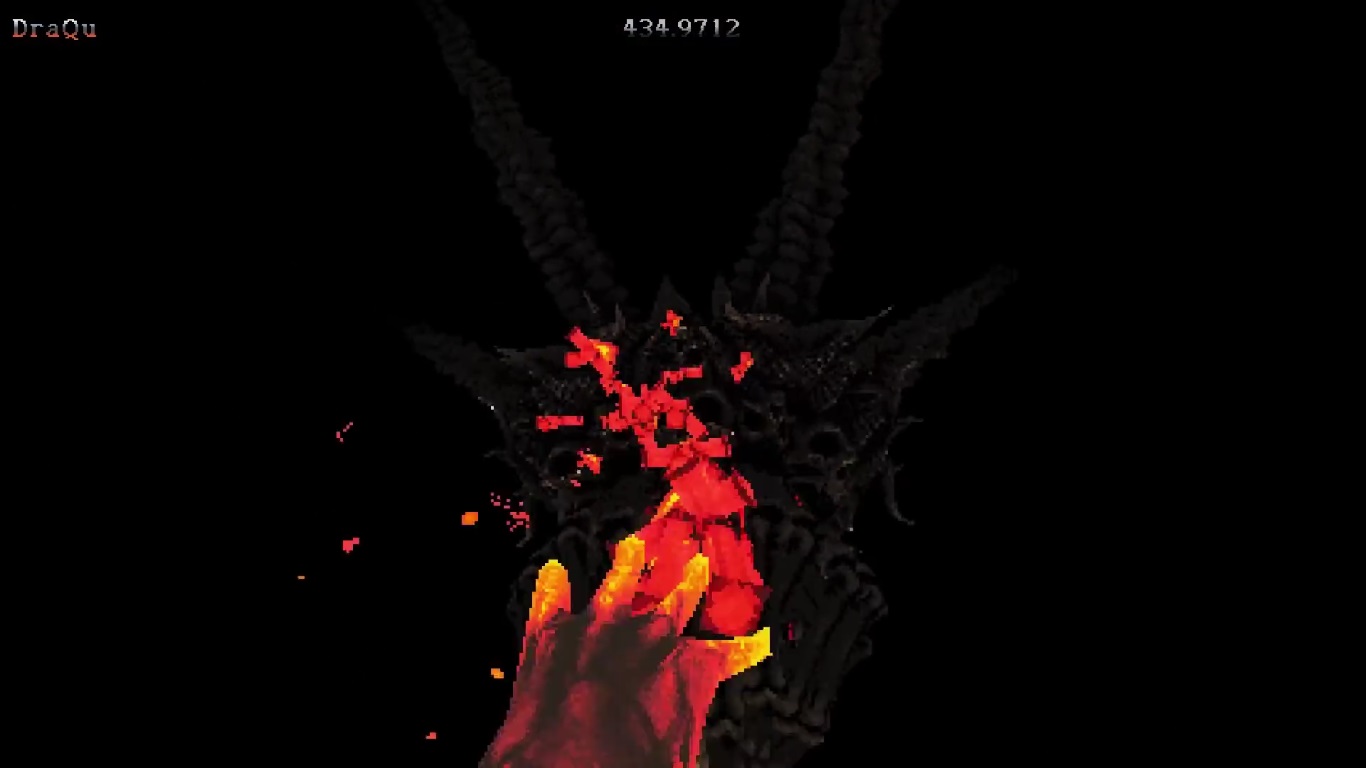 Now, if you are not into score attack games or crushing difficulty, I would still give Devil Daggers a go for just how beautifully designed it is. It is so focused around making you repulsed but also bolstering you to push on, by countering forces of its fiendish monster patterns and its leaderboard. At the end of every run, you get a readout of your world position, including your shot accuracy, your kill count, your number of gems collected and most importantly, the people who are hovering around the same score as you.  Those names get burned into your retinas as you hover around the same score until you eventually triumph and push past them to another batch of sinners who are locked in the arena with you. If you’ve someone on your Steam Friends List with a higher score, their achievement will be placed at the top of the board, quietly taunting you until you beat their survival time by a few miliseconds. The real genius comes from the replay system which is embedded into Devil Daggers, where a replay of your best run is always saved and uploaded to the leaderboard and can be watched by anyone. You can then break down and analyse how that person survived 4 seconds longer than you did during the phase with the giant spiders or replay your own finest moments and see what made you survive that long. If you really want to see how batshit insane Devil Daggers can get, you have to watch the replays of the top runs. Unfortunately, there is a hacker currently taking the top spot but the 2nd and 3rd place did it via pure skill and oh my life, that is a true glimpse into Hell. You get these momentary seconds of calm when you pass certain waves before an avalanche of skulls, giant worms and spinning obelisks assault the screen and you watch these absolute beasts of human beings weave through the mash of projectiles. It becomes almost impossible for the mind to comprehend; this wave of screaming, undulating bodies that you are tasked to destroy.

That’s another reason why Devil Daggers is a must play, the sound design is a masterclass for how to make a player feel vulnerable and disgusted without even seeing an enemy on screen. Your shotgun blast feels like shrapnel tearing through meat while the bullet stream hisses as it carves through enemies. Skulls whip past you and groan as they get closer, the spires melt and gurgle into blood when you take them out and the spiders will make your skin crawl as one scuttles into the arena from behind. You have to play Devil Daggers with headphones to get the full effect and when the mob gets massive, the hellscape is truly complete. There is no music, just the sound of anguish and it’s oh so effective. The clearly 90s-inspired aesthetic of the enemies evokes the feeling that you are playing a cursed version of Quake II that was locked away in a safe somewhere to stop children from worshipping Satan. The enemy design are just crude enough to match the aesthetic but clear enough to be terrifying when a wave of skulls emerges from the darkness. Shadow and lighting is integral to inspiring fear in Devil Daggers, as new demons suddenly pop out from the darkened edges of the arena or monsters light up in a sickly yellow as they pass your hand and end your run. Sorath knew exactly the mood and feeling they wanted to evoke in Devil Daggers and it absolutely nails this overwhelming anxiety of the new wave yet a persistence to go on fighting.

Devil Daggers is a little game that knows precisely what it wants to be and achieves it with surgical precision. As just a piece of design, it should be lauded but for establishing atmosphere, it cannot be beaten. If you love score attack games or shooters in general, you’ll put hours into Devil Daggers but I urge anyone to play it for an example of craftsmanship and clarity of design. It’s only £4, you owe it to yourself to play it.

This is one of the only games I've felt genuinely uncomfortable playing yet soldiered on due to how well crafted it is. A design masterclass, a must have for anyone remotely interested in shooters.