2016 sees the launch of two wacky golf games in which the goal is more wanton destruction rather than sinking a birdie. The first off the tee is Dangerous Golf, the first game by new indie studio Three Fields Entertainment who take their experience working on the Criterion-era Burnout series and shooter Black to create this sports game which is more Santa Destroy than Saint Andrews. For all its destruction physics and stacking gimmicks, Dangerous Golf lacks the real anarchy or silliness that a game about blowing up petrol stations with a well-timed drive deserves.

Dangerous Golf feels like a lost launch title from the PS2 and Gamecube era, a resurrected game from the early 2000s that should have released alongside Cel Damage and Tony Hawk’s Pro Skater 3. It even has that same visual style, menus with ridiculous WordArt headers and terrible puns to name many of its stages. It embodies that generation’s love of score attack games but brings it to the current era with long loading times, shonky online leaderboards and a destruction engine that is prone to massive slowdown on certain courses. It all kind of works but the presentation is akin to your lame dad buying a second hand sports car and putting a singular racing stripe down it to look cool. It’s functional and can occasionally go fast, but it doesn’t hide the fact that playing Dangerous Golf is really pedestrian.

The problem stems from the fact that unlike Burnout’s Crash Mode, which required you to drive into a moving turnpike or interchange at speed to cause utter chaos, Dangerous Golf starts from a place of stillness. There are no moving parts, no people to send flying into a priceless marble bust, every scene in Dangerous Golf is just waiting for you to hit the ball and start the destruction. Rather than coming into a room full of action and smashing everything with a very small wrecking ball, you’re setting off a crappy Rube Goldberg machine where it ends with the room being on fire. You’re smashing up a set, rather than actually causing havoc in a living scene. Dangerous Golf is sterile to play, it lacks that anarchic energy that was present in Burnout, where you’d drive full pelt at a crossroad and bounce delicately off tanker truck and hatchback as they drove into the crash and made it continue.

It’s not helped by the way you propel the ball, which lacks the build-up and pay off you’d get from actually hitting a golf ball. There is no moment of the golf club swinging back, the pause at the top before the driver flies down to thwack the ball across the room, you simply flick the Left Stick and the ball goes flying. Even having a Power meter would go some way to giving the launch of a ball some oomph. You do unlock an ability called the Pistol Tee later on, which allows you to aim the ball with a laser sight before shooting it off but it still feels weightless when you fire your projectile into a careful stacked display of wine bottles. Once you’ve actually fired your ball into the scene before you, you can alter its flight path through the use of the Smashbreaker, lovingly ripped off from the Crashbreaker found in Burnout. 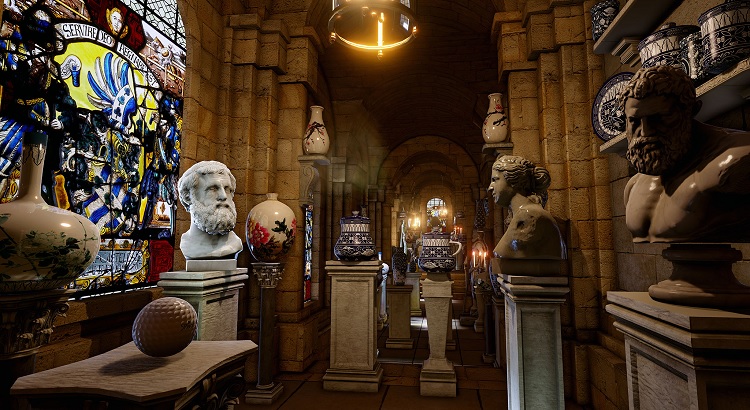 All of the zones for Dangerous Golf are pretty dull for a game that is trying so desperately to be zany.

By pressing the Circle button to ignite the ball, you can steer it through the level, changing the height of your ball bounces via the triggers and even slowing down time with the Right Bumper to better adjust the trajectory. Unfortunately, it’s very rare that you even feel in control of the golf ball, as changing the angle of a bounce is a crapshoot at best, with the ability to slow down time not really helping in actually altering your flight path; it’s mainly there to make the ball look extra cool as it flies through a series of priceless vases. The joy of Dangerous Golf is watching the destruction in motion, rather than piloting the ball through the series of pulleys and switches that lead to the final big explosion. It’s amazing that Three Fields didn’t think to add a Replay Mode or some kind of in-game gif generator to capitalise on the fun of watching the havoc happen.

There are plenty of opportunities to look cool, as Three Fields have made sure there are a ton of scenarios for players to smash their balls through. The main meat of Dangerous Golf has golfers causing as much damage as possible in Smashbreaker mode, before putting the ball into the hole to seal the deal. Most stages have a certain item type that you have to destroy, like knocking over 50 wine glasses in the French banqueting hall or knocking down the neon sign on an Australian petrol station. Completing this destruction task gets you extra points, with there being more points for knocking over the special jar of ‘Secret Sauce’ found in each level, sending the ball through a warp point or putting the ball into the hole by bouncing it off five walls. It becomes more like a puzzle as the levels wear on, as more and more gimmicks are added into the mix. You’ll be avoiding knocking over a cake placed in the centre of a room or gluing your balls to the wall, as you plant bombs around the room to open a locked door. Some gimmicks are successes, like the special glue but having to avoid hazards like flaming hobs when you have a special ability which lights your ball on fire is a bit of a headscratcher. Some of the challenges are also a bit of a non-starter, like the putting challenges which have you trying to sink as many balls into special coloured holes in a time limit. Dangerous Golf seems to have a magic magnet which it turns on every so often, as there is a tendency for balls to magically fly into the hole when you’ve aimed in the complete opposite direction yet it manages to bounce off 6 walls, arc off a cask of wine and land perfectly in the hole. Other times, you be directly in front of the hole, flick the stick as delicately as you can yet it’ll bounce off the rim of the hole and make you fail the mission. Much like the missions, putting can be massively hit or miss.

Due to the number of objects that can be on screen at once, Dangerous Golf can hit some massive sections of slowdown, which is a bit of a problem when you’re trying to precisely aim a ball to hit a specific object in a massive library. I’ve had moments where balls have flown out of bounds to suddenly appear in bounds again and in one special moment, I had my golf ball jammed in between two bookcases which ruined my long score chain. At least if the levels themselves aren’t anarchic enough for you, watching the Unreal 4 engine goes bananas in certain spots can be all the excitement you need for a day. The environments are straight out of a tech demo, meant to show off the destruction engine rather than create silly scenarios. The ‘wacky’ text prompts only go so far when you are smashing yet another rack of champagne in the same French palace. Why there wasn’t a massive mini golf level or more abstract courses I don’t know as this sort of game seems like the perfect place for slapstick comedy but it ends up feeling quite po-faced.

There are moments where you will be blown away by the destruction on show in Dangerous Golf but it loses steam after a couple of hours play. If it had gone the route of a Super Monkey Ball, swapping out realistic levels for more abstract courses which focus on the wackiness of the destruction physics, Dangerous Golf would have held my attention for much longer. You can only smash so many boxes of fruit before the thrill wears off. It’s certainly a feature rich game, with there being a local co-op campaign and online World Tours to play through but you’ll be wanting to retire to the clubhouse after a few rounds. Three Fields clearly know what they are doing and I’m looking forward to seeing them applying their penchant for destruction to their eventual racing game but as for golf, I’d keep the clubs in the buggy.

While the destruction can be fun to look at, you can only awkwardly knock over so many cans of paint before you get bored. A valiant first attempt from Three Fields but it lacks the fun or true silliness that a game of this caliber deserves.