It is often said that if you remember the sixties, you weren’t really there. The same cannot be said of the eighties, which has been highly romanticised in many popular works such as Gone Home and Stranger Things. Crossing Souls is a Zelda styled action RPG was originally funded via Kickstarter in 2016, and is the latest game to provide homage to the beloved decade, providing dozens of subtle and blatant references to TV shows, books and video games that die hard 80’s fans will love.

The story of Crossing Souls is designed to be like a kids television show from that era, even having the artefacts that usually appear on recordings made on video cassette, commonly known as VHS. At the beginning of the summer holidays, five young pre teens uncover a mysterious stone which unlocks the ability to see the spirits of the dead. By uncovering the artefact, they unknowingly attract the attention of a powerful military organisation, who are determined to retrieve the stone by any means necessary. The storyline stays true to the style of family entertainment at the game, with a ruthless lead villain, hard headed emotionless minions and goofy antagonists who are more comedic than threatening. Despite the family friendly approach, there is quite a bit of adult language which heavily suggests that this is meant for adults who lived through the era.

Each of the five main characters has their own unique fighting style and ability to solve the various environmental puzzles. The courageous blue haired hero Chris is able to climb walls, and wields a baseball bat that die hard Nintendo fans will recognise from the Mother franchise. Sassy tomboy Charlie is able to fling herself across wide chasms, and use a Castlevania style whip. The most useful characters prove to be Matt, whose technical expertise allows him to fire an electrical gun and hover in the air like Princess Peach, and Biggy, whose upper body strength allows him to move certain objects and eliminate stronger enemies in no time at all. The final character doesn’t appear to be useful at first, but Kevin’s true abilities are one of the best elements of the game once they are unlocked during the storyline.

Whilst solving the puzzles and defeating enemies in the overworld, sometimes you will need to slip into the parallel world of Duat in order to fight the ghostly enemies. Thankfully, this proves to be an enjoyable process rather than a chore, providing a set of puzzles that are more entertaining than frustrating. The boss battles are some of the more entertaining encounters, with one of the best borrowing from a classic 80’s rhythm game known as Simon Says. During the early sections of the game, sometimes it was possible to get stuck in boss battles because the next phase wasn’t triggered, but the vast majority of these issues were fixed via a patch that was helpfully provided by the developer.

One of the best elements of Crossing Souls is the collectables that you can find scattered across the game. Some of them such as heart shaped lollipops are solely used to replenish your health or stun enemies, but the rarer items prove to be much more valuable. They include video cassette tapes, audio tapes and retro game cartridges which parody various popular culture icons of the era. If you are interested in Lionel Richie, Ghostbusters or Paperboy, then you will find certain collectables will make you smile when you find their in game alternative.

The only small disappointment with Crossing Souls is that the character’s primary abilities remain the same once they are unlocked, whereas several games of the same genre such as Cross Code have offered the potential to upgrade fighting abilities throughout their storyline. The combat remains fun with the interchanging of the five main characters, but it would have been nice to see your heroes grow with their experience, rather than receiving all of their power when their fighting prowess becomes part of their repertoire.

Overall, Crossing Souls is a fun hack and slash action game with an entertaining story, cleverly designed puzzles and a great retro aesthetic which is present all the way through. Despite the lack of upgradable abilities and a chapter select option to recollect missing collectables, Crossing Souls is one of the best action games to be released this year, and a trip down memory lane that should be taken at the earliest opportunity.

Crossing Souls is a well presented action game with several types of nostalgia added to make a unique experience. 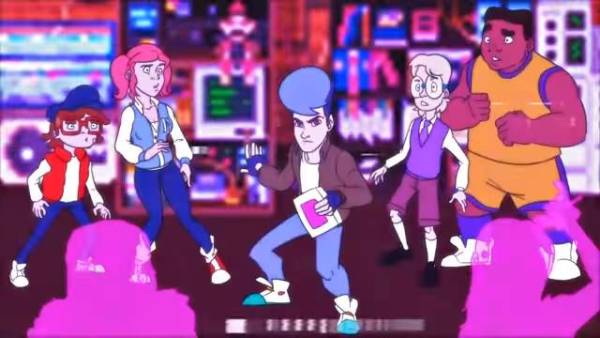