Cricket Captain 2014 is the latest in the series of cricket management titles brought first by Empire Interactive and then Childish Things, with Chris Child at the helm throughout. Cricket Captain 2014 was released on the 8th of August, after a slight delay in late July.

For a lot of people, another year means another set of sports games to look forward to. FIFA, PES, NBA, NHL and FM represent some of the bigger abbreviated sports titles enjoyed by millions year in, year out. For me, however, no game is more anticipated than Cricket Captain 2014.

It’s easy to see the growth in popularity for sports management games, thanks mainly to the Football Manager series, but nonetheless it is a niche genre. Cricket management represents a tiny portion of the genre, and as such the games struggle to offer anywhere near the depth found in Sports Interactive’s football titles. Although initially inspired by the Championship Manager series of football games, the Cricket Captain series has never really lived up to the growth of sports management genre.

One major criticism of Cricket Captain has always been the apparent lack of progress from year to year, with usually nothing more to show than updated squads and statistics. Anyone that has given up on the series, therefore, might double take when looking at Cricket Captain 2014. 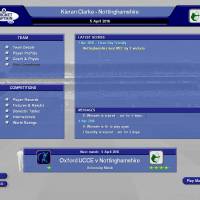 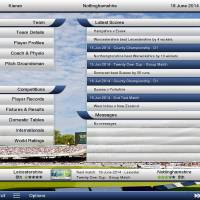 It cannot be argued that the visual side of the game has taken a leap from last year. Childish Things have treated us to a colourful new interface, which is definitely a nice change of scenery. A change of scenery is about as far as it goes, though. Very few people will be fooled by the pretty colours – the game hasn’t changed much. The major promise from Childish Things, in my opinion, was a refined match engine. Every other feature on the list seems very bland, including “improved highlights” and “on-line play” (both of which seem remarkably similar to their 2013 alternatives).

Any match engine changes are very minor to the point of not being apparent. A revamped interface makes it feel like a different game for 5 or 10 minutes, but as soon as you get past that it really feels identical to International Cricket Captain 2013. I do not envy the task Childish Things have – Sports Interactive and Eidos before them raised the bar high for sports management games. All I’m asking for is progression in gameplay. A lack of mid-season signings, the monotony of setting up coaching sessions and the lull in gameplay between the end of the season and the start of the new one, when managing an English county, add up to deliver a poor game given the years of work put into this series.

If you’re a newcomer to the series, and a cricket fan, you will undoubtedly enjoy Cricket Captain 2014. If, like me, you’ve bought every title in the series since 2009 then you will almost certainly share my disappointment at the lack of movement in Cricket Captain. There is a group of devout cricket fans out there constantly longing for games based on the sport, and I include myself in that bracket.

Games like this will be played for hundreds of hours by dreaming cricket fans that can immerse themselves in the idea of taking their supported county to glory and coaching their country to Test Match victories. That is as far as it goes. We buy Cricket Captain 2014 because of the lack of an alternative, and in spite of the constantly unfulfilled hope for more to be delivered from the developers. For another year, I find myself thinking “there’s always next year”. Let’s hope for a better innings in 2015 from Childish Things.