Civilization: Beyond Earth is an extremely difficult game to describe to a long-time fan of Sid Meier’s venerated series without sounding negative, despite it being a good game. To an newcomer, the borderline trite descriptor of “take over an planet through force or integrating humanity into their new world” seems an easy enough concept to take onboard. For the former group however, it becomes a bit more murky. Civilization: Beyond Earth offers enough incremental change to be relatively fresh, but it is far from the massive leap Firaxis thinks it is.

In a future where Earth is ravaged of all its resources, humanity has sent colonies into the stars to pioneer new ways of life to save us from a slowly encroaching doom. It’s a simple premise which replaces the historical figures and timeless quotes with corporations and space-cults. You take the role of an expedition leader, tailored by a few starting options such as your sponsor, crew and cargo. Doing away with the famous leaders of men that the series has relied upon for personality, forging your path own path before even landing is one of Civilization: Beyond Earth’s more interesting features at face value. The ability to pick and chose an early specialization initially seems great, while it does away with some of the tedious early-game waiting. Beginning with a free worker or culture boost is an immediate way to give the sense of a unique journey, as well as preventing the early-game rush to ruins to establish quick dominance from previous games. However, much like its forbears, specific builds are more optimal than others, leaving the options much more limited than they initially seem if you want to push those valuable resources further.

After establishing a city on the planets surface, the game slowly begins to unravel. The most important change to the overall formula is the tech web. Instead of a linear progression from left to right, Civilization: Beyond Earth is much more open-ended in where you take humanity. Each main branch gives you access to new buildings, resources and units, but further tangents from main tech allow for further specialization. This route allows for a more reactionary approach to the woes the world readily throws, allowing for progression to be much more fluid. With the lavish amount of options though, there is a fairly steep learning curve to know which tech unlocks what and what that means. It can be a nightmare to find out how to pull Firaxite from the ground and another in what that can actually be used for. This is in no part thanks to an over abundance of information, which is conveyed poorly through same UI design that makes a jumbled mess of similar symbols and terms. Thankfully, a nifty search function alleviates this issue somewhat, although not in the most player friendly way. 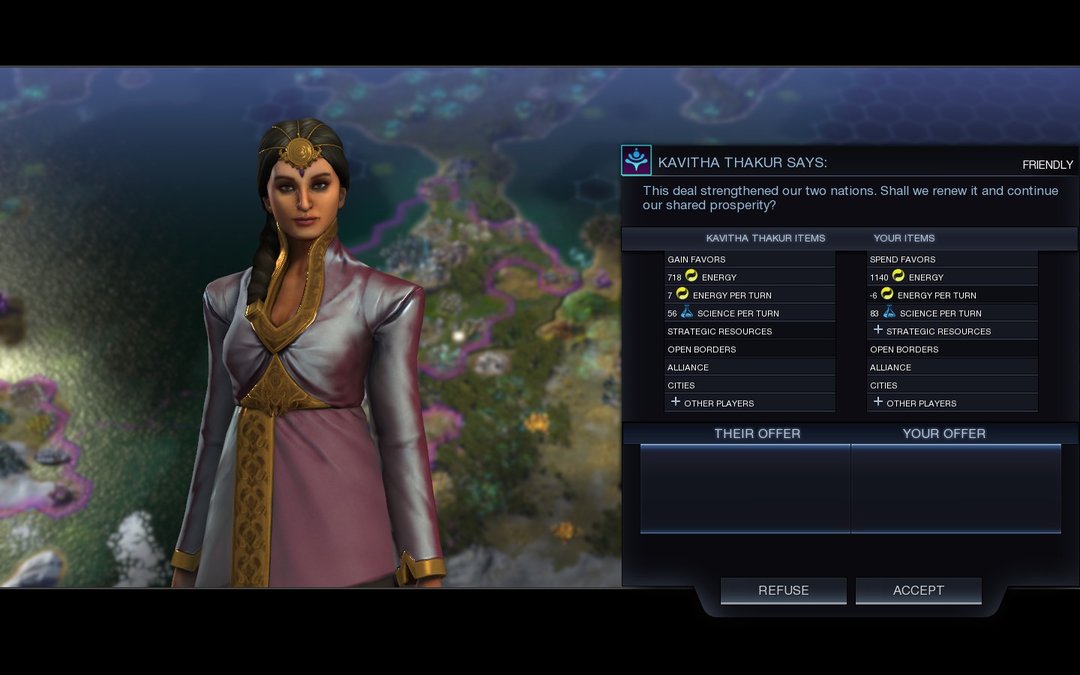 Where most civilizations will differ now is through affinity. By choosing either Harmony, Supremacy or Purity, vastly different approaches to the hostile worlds can be taken. Where Harmony seeks to become one with the world through assimilating parts of it into themselves, Purity dominates through force, unwilling to change and warping the planet to their image. As you rise in affinity between the three, bonus abilities will periodically unlock, and give you access to powerful endgame units and “perks”, small, incremental buffs that unlock by improving your affinity.

The number of units to draw from has certainly taken a dive, but in the name of streamlining, thankfully done for the better. While there is now only one basic soldier for the entire game, an upgraded Harmony marine gets combat boosts in usually debilitating clouds of alien miasma, where as a Supremacy marine gains heavy flanking benefits. All units gain from these buffs when unlocked and helps simplify the combat portion of the game without taking away any depth. A player who is making progress of any sort will most likely have access to a decent handful of units, making it harder for domination players to steam-roll the unprepared.

These will become vital as you fight of the varied alien species that inhabit the new frontier. These hulking lifeforms can make early game hell for unprepared players, crushing units who wonder too close to their nests in a single assault. The balance of power slowly tips the other way by the mid-game, changing them from a threat to a resource, evolving the way the world can be used. 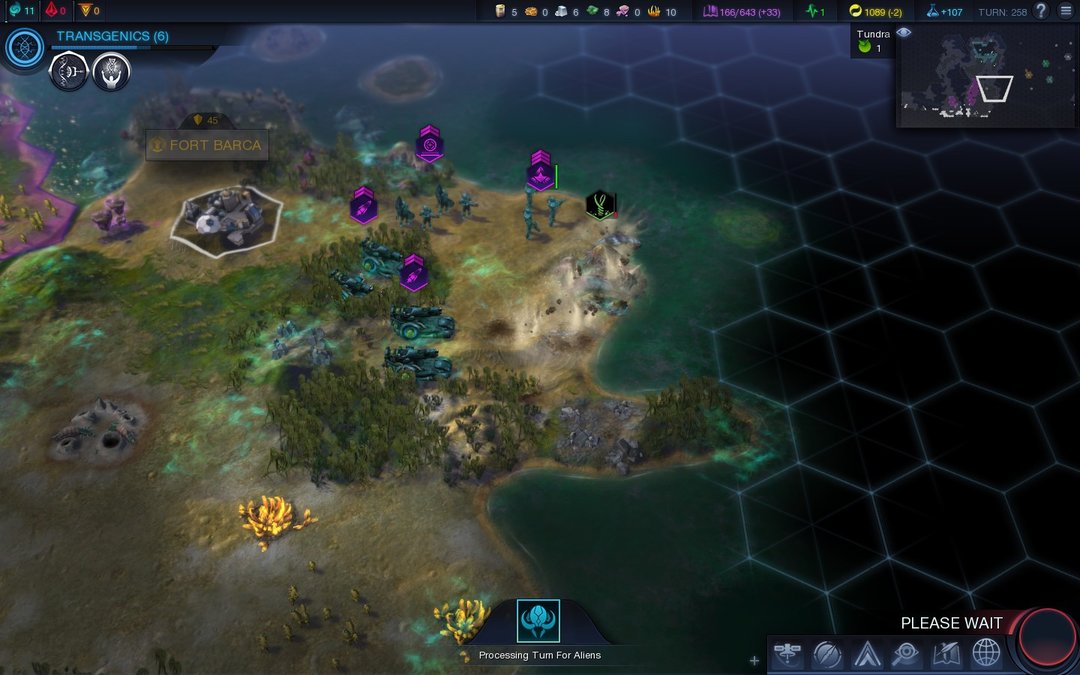 Little can stand up to the might of the Siege Worm

All of this gives Civilization: Beyond Earth a greater feeling of forward motion than Civilization V. Completing minor quests, which offer bonuses for completion, as well as exploring the tech web, virtue trees and the affinity unlocks do a great deal to keep things engaging in the long run. There is always some new event just a few turns away. However, none of it feels substantial over Civilization V and the expansions. Apart from the streamlining, most of these systems aren’t new, and have been re-skinned and contextualised for space, while increasing the frequency of events. It’s like walking into a renovated house; Sure, the new wallpaper is nice and they changed the carpet, but it is the same space with the same possibilities.

Other semi-new tricks include the improved espionage system. Instead of reaching a certain point and being handed a single spy, after researching a specific tech you are handed a handful of spies which can be sent to siphon resources, recruit defectors or even plant a dirty bomb. Making underhanded tactics a more viable option can feel over-powered however, to the point where it can save a failing economy for hundreds of turns if used correctly against the brain-dead AI.

One thing that hasn’t carried over well is the AI’s ability to put up a decent struggle. This is nothing new to the series, and even Civilization V never had it perfected after years of patches. What is surprising though, is that Civilization: Beyond Earth seems like a step backwards, with other leaders barely noticing you unless they want something. After repeatedly being caught attempting to summon giant aliens to their cities, they would never go to war with me, or acknowledge that I thought their city was ready for demolition via goliath alien overlord. 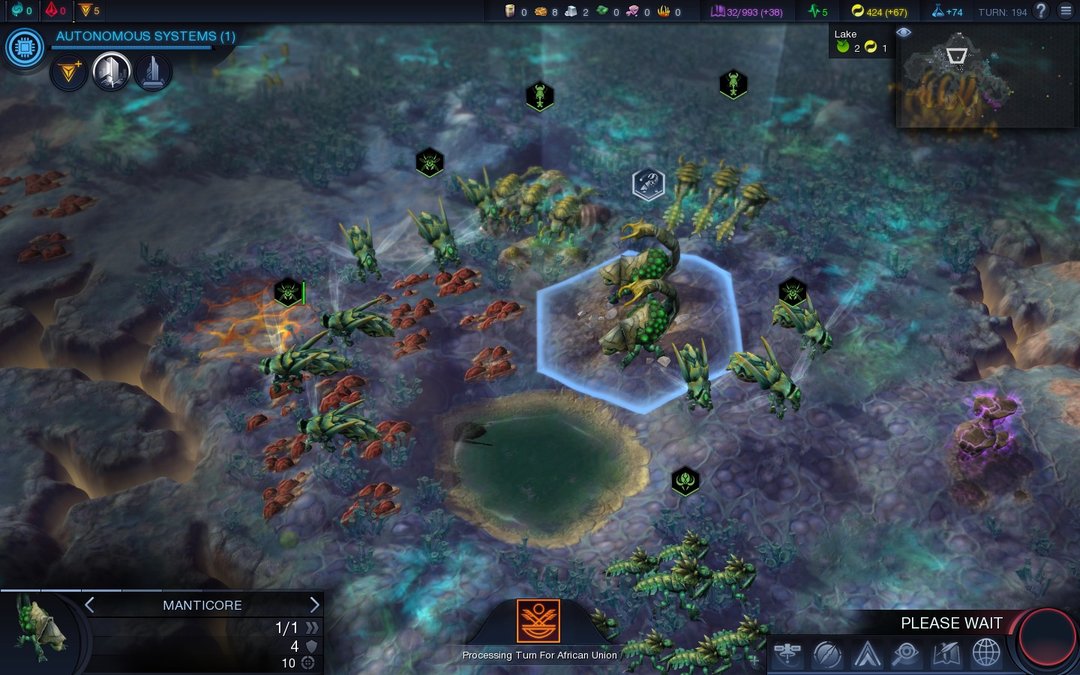 Taming aliens may sound like a good idea, but by the point you can it is largely pointless

This really is a shame as it mutes the win scenarios. Gone are the days of farming specific resources, like culture and science, to beeline towards a certain victory type. Now, multi-tiered quests stand between planetfall and ultimate dominance. Some call for specific tech to be researched, others for certain buildings to be constructed. As most of them intersect at one point or another, there is no locking into one victory type and hoping the dominoes fall a certain way. Like the tech web, it makes for a more fluid, reactionary game that relies more on reading new information, rather than charging in one direction and hoping for the best.

Civilization: Beyond Earth’s mechanics create a tone of exploration and discovery that consistently rewards forward thinking. This comes with many baby-steps, alongside a few leaps away from previous Civilization titles. It creates a jagged edged addiction that pulls you in for another turn or game, being both new and familiar. That same edge, however, is dulled by inept AI which seems all too ready to roll over to your extra-terrestrial whims.

It may change in time, as did Civilization V, but the promise of a better future doesn't change the fact that right now, discovering new worlds is a pleasantly tactical, if all too easy experience.