Call of Duty as a franchise has gotten into the habit of releasing four DLC map packs per title ever since Black Ops I. Black Ops III has carried on that trend and Awakening, the first of the four, has just launched on Xbox One with four multiplayer maps and a zombies map. But as people will always argue, is it worth the £12 they ask for?

Splash is the first multiplayer map, set in a bright and colourful water park with a couple of long range sight lines but predominantly set up for close-quarters combat. I’ve found myself nearly always vetoing Splash when it’s popped up in the pre-game lobby, for one reason only: The spawns are completely broken. No matter the gamemode, it is practically impossible to predict the spawns of the enemy team, and speaking as someone who used to compete at a professional level for Call of Duty, it’s a key aspect to being a successful and fair map. Search and Destroy is the only gamemode that worked well on Splash, likely due to the lack of respawning. If you do play Splash in public lobbies, no matter the gamemode expect to see a lot of SMGs and automatic Assault Rifles – Snipers and LMGs are unlikely to fare well in what is probably the most colourful map to ever grace Call of Duty.

Set in a training zone, Gauntlet has three distinct areas; Jungle, Arctic and Street. It’s as close to a traditional three lane map as you’ll get. Objective-minded players will be in their element with various paths and flanking options meaning SMGs and Shotguns feature heavily. Players who prefer to establish map control won’t be completely lost either, with a few long sight lanes in the middle of the map overlooking the B flag in Domination. As a run and gun player, I’ve had some of my best scores on Gauntlet but for those who prefer to play patiently in corners, Gauntlet probably isn’t the map for you. 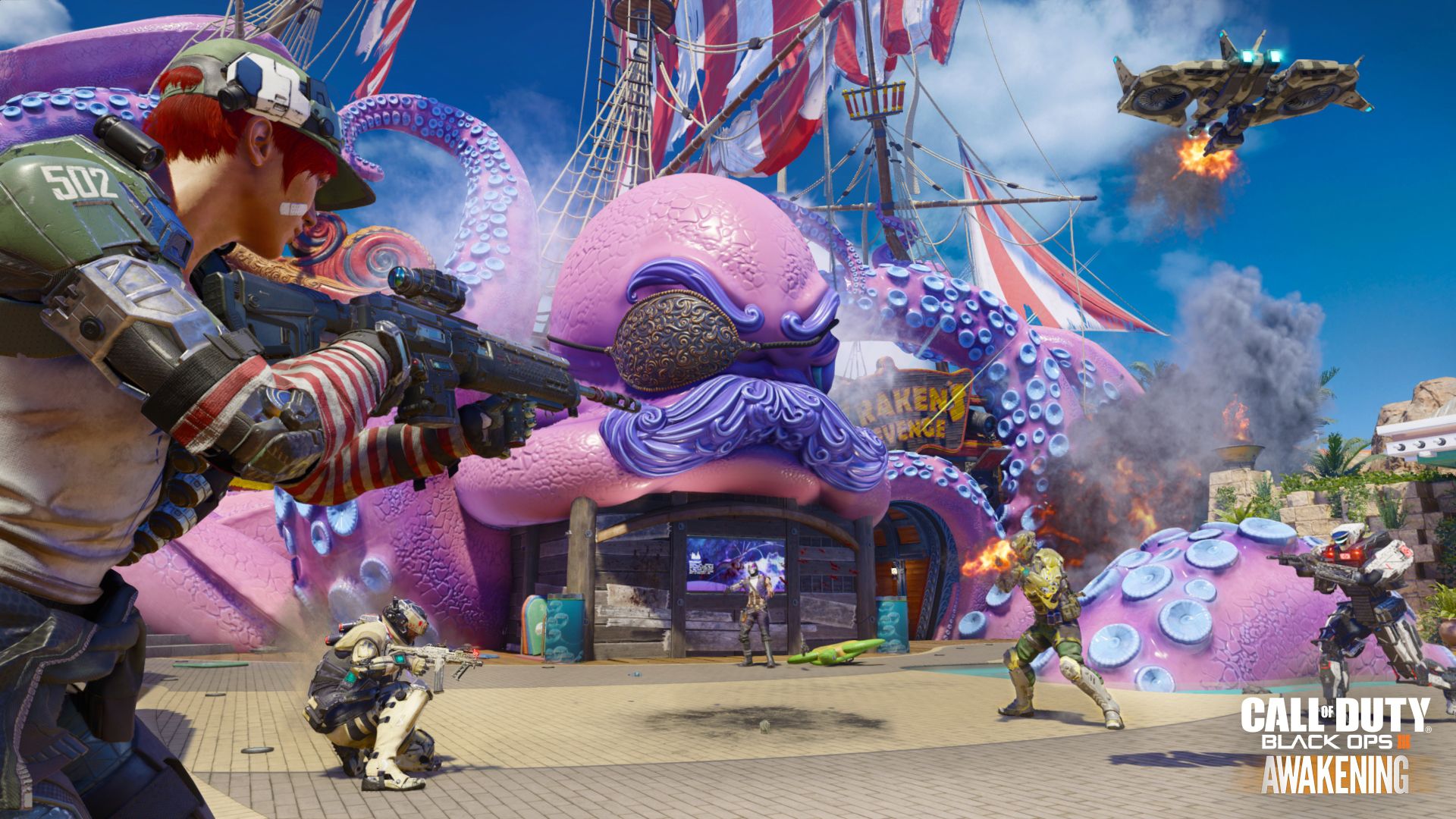 Rise is set in a construction zone in Zurich and is the largest map in Awakening by a long shot. With three standard lanes and a central choke point featuring multiple overlooking windows, Rise is suitable for all styles of play, excluding Shotguns. Despite it being the biggest map, there’s narrow corridors aplenty that allows travel across most of the map without risking being picked off by a sniper or anchor. I found Hardpoint and Team Deathmatch to be the most suitable modes as the layout encourages slower and more methodical play, compared to a map like Splash which is the complete opposite: Chaos.

Highjacked was a fan favourite from Black Ops II and it’s made a return in this DLC pack, albeit as a flying police airship rather than the superyacht found previously. Called Skyjacked, the layout is pretty much identical to the former with two buildings overlooking the central area and an underground passage allowing for easy access to the enemy spawn area. Personally my favourite map from Awakening, as I often run around with a shotgun in Uplink and Domination simply causing havoc, although all styles of play can be utilised, with snipers having nests opposite each other in the buildings which is also suitable for other long range weapons while SMGs and Shotguns can run amok slaying and playing the objective. Just beware of pushing too far into the enemy spawn as even in game modes like Uplink and Capture the Flag, it can still flip the spawns so they’ll start spawning in your team’s base. 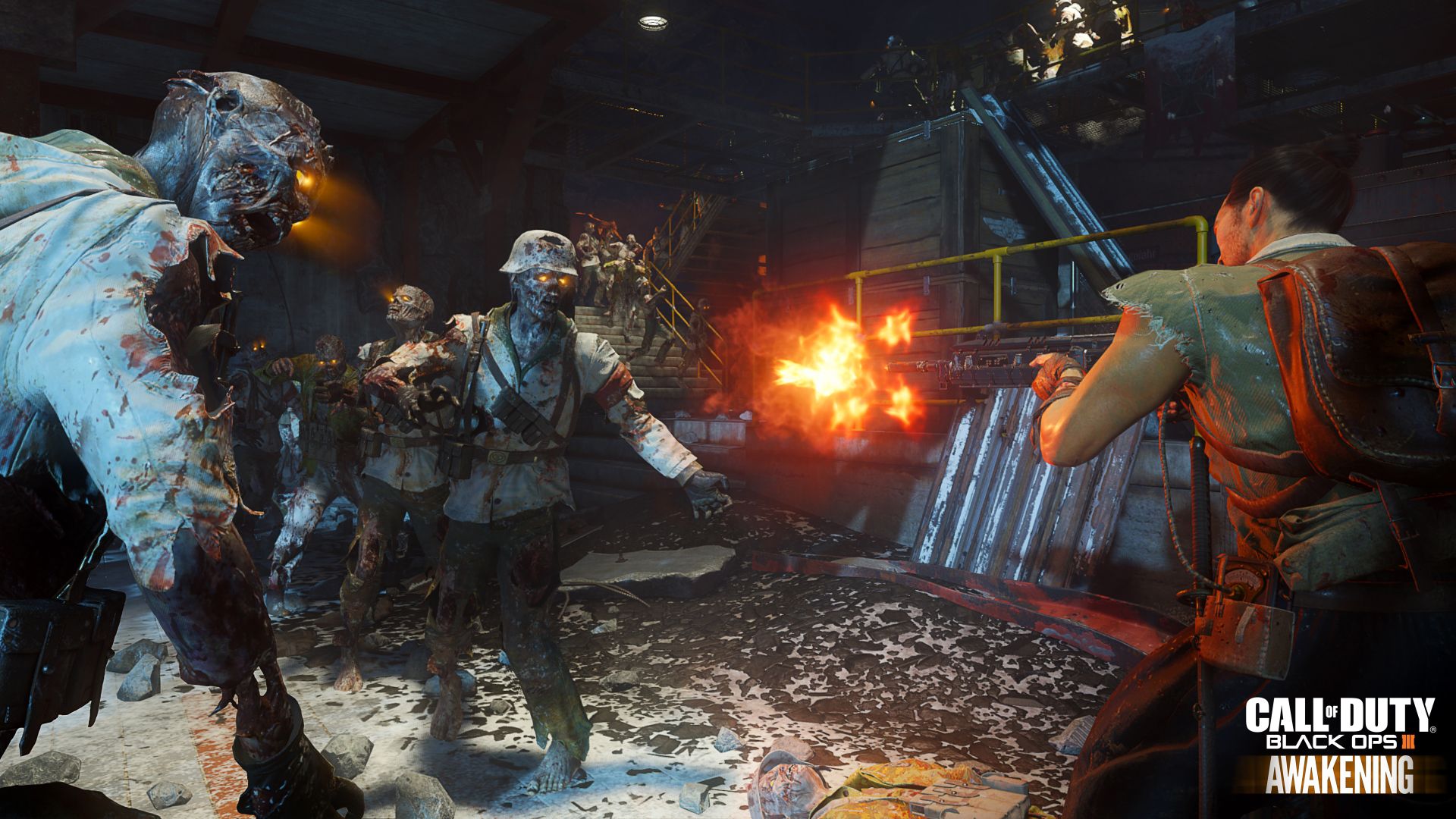 Der Eisendrache (The Iron Dragon) is the name of the Zombies map included with Awakening, and is considerably better than Shadows of Evil, the map included with the base game. Set in the Griffin Castle in Austria, the four playable characters are the iconic Zombies buds; Tank Dempsey, Nikolai Belinski, Takeo Masaki and Edward Richtofen. Der Eisendrache includes a plethora of features from previous Zombies maps such as the Der Wunderfizz machines from Origins and the Gravity Lifts, now known as the Wundersphere returns from Moon. It’s 50% bigger than the pre-order bonus map The Giant and as is the case with most Zombies maps recently, the starting goal is to turn on the power to enable the cooler features around the castle. Three dragon heads are found mounted on the walls and once you’ve killed seven zombies near each dragon and the dragons have eaten the corpses, a special bow called Wrath of the Elements appears further inside the castle. Plenty more easter eggs exist in Der Eisendrache such as low gravity in a specific room when you activate four pressure plates, and the ability to turn all zombies into skeletons when you shoot three skulls scattered across the map. I’m no Zombies expert but have played around half of the twenty Zombies maps in total and Der Eisendrache is one of the most fun maps yet, second only to Ascension on Black Ops I. Not easy, but the huge map means there’s plenty to explore and discover. Zombies has certainly come a long way since Nacht Der Untoten on World At War.

So is Awakening worth it? For Skyjacked, Gauntlet and Der Eisendrache, definitely. Splash and Rise I’m not as fond of but regular Black Ops III players, especially those who play a lot of Zombies will definitely get their money’s worth.

One highly disappointing and one average map accompany two fantastic ones in the first Black Ops 3 map pack, alongside an entertaining zombies experience.