It would be incredibly cynical to dub Call of Duty: Advanced Warfare as “Call of Duty: We Now Have A Jetpack Too”, but that’s exactly what it is. You dash around maps, pinging across rooftops and rocket sliding through hallways, all the while popping off rounds from near exactly the same guns you always have. The more things change, the more they stay the same.

Sledgehammer Games aren’t new to the franchise, having co-developed Call of Duty: Modern Warfare 3 with Infinity Ward. However, this is the first Call of Duty game not at least partially developed by either Treyarch or Infinity Ward, which a more jaded person may say is because Activision desperately want to transfuse some fresh blood into the aging series.

Having moved past modern warfare…somehow, we have moved into the future of 2054, where Metal Gears, drones and exoskeletons rule the battlefield, or more specifically, Atlas, a PMC owned by Kevin Spacey (or hereby known as Michael Irons because having Kevin Spacey play himself would be too fantastic). 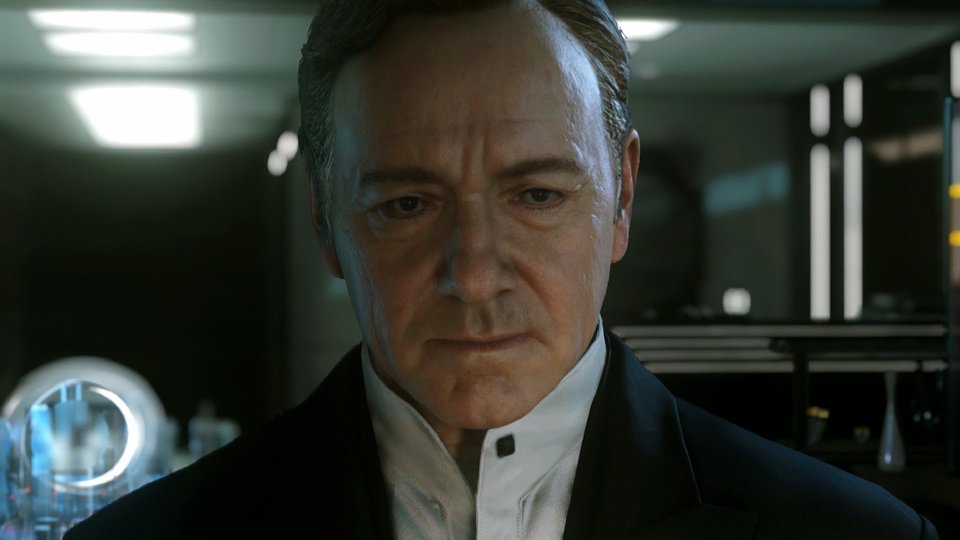 I think someone left the “Frank Underwood” setting on Mr Spacey

In usual Call of Duty fashion, the story mode takes itself way too seriously, creating an odd juxtaposition between the silliness of drone swarms buzzing you to death like metallic bees and your Marine sergeant barking orders for you to hop on a turret to blast away another wave of “insurgents”. Thankfully, the moments of all too serious America-HOORAH-isms are placed during the beginning and end of the six hour campaign, leaving a gooey centre of hoverbikes, grappling hooks, and hammy live captured performances.

Kevin Spacey may have got top billing but you will spend most of your time looking at Gideon Emery’s grizzled jawline as you run and gun across the world as Troy Baker. The first two turn in fantastic performances, with the deliciously evil Spacey grabbing all of the attention like a talent black-hole, sadly overshadowing Emery’s less scenery chewing performance at every turn. Troy Baker on the other hand sounds bored, reading his lines like he is still in year 9 English class.

This helps make the story vastly more enjoyable than anything the series has seen in a while. Summarized as – You are a marine, something goes wrong, you work for Atlas, something goes wrong, you work against Atlas – it holds no surprises for anyone and has plot holes you could frisbee the disc through, it holds up just enough under its own silly logic to not cave in on itself and make it thoroughly enjoyable. 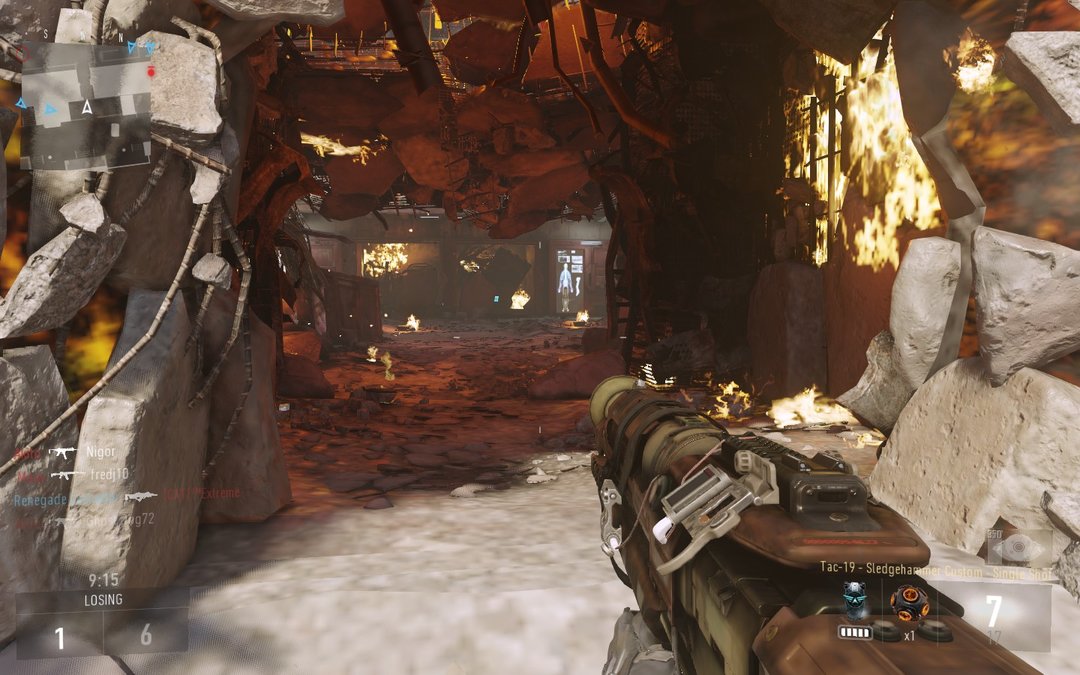 Is this shotgun sci-fi or Steampunk?

This could of course be helped with the aforementioned jetpacks, letting you hop around maps at record pace and giving you more freedom on the missions. Follow this guy and shoot who he tells you is the order of the day, but, when the blue moon is out, it gives you an objective and lets you go nuts. The stand out moment a stealth based section, giving you an open area and letting you muddle your way across it in your own way. Use your hook to drag every guard into the bushes? That’s cool. Want to take the high-road and jump from the rooftops? Perfectly fine. It’s a brief glimpse into a world of just how good Call of Duty can be when your not chained to the proverbial bed-frame of forced enjoyment, instead of your own brand of adult-oriented-metaphorical-fun.

Other exoskeleton (Exo) abilities make the occasional appearance, such as the basic slo-mo, a pop-up shield, instant heal and grappling hook are handed out now and then, but they rarely get anything longer than half an hour to shine before being taken away. Other possible future tech is available to mix things up, like the infinitely pointless “smart grenades”, but leave little impact due to their gimmicky nature.

Now the multiplayer, that is where the new abilities really get a chance to shine. The maps have all been opened up more to allow for all sorts of G-force inducing maneuvers, telling physics to get lost and all sort of gravity defying fun. Upgraded from the catch-10 system found in Black Ops 2, Call of Duty: Advanced Warfare goes with Catch-13. Everything is interchangeable, at a cost. Appearance, weapons, mods, grenades, Exo abilities and score streaks, letting you go into each fight with your own way. You can get rid of anything to make room for something else, like having no score steak abilities to attach another weapon mod or exo power. Another example of Sledgehammer making Call of Duty better by making that leash a little less tight. 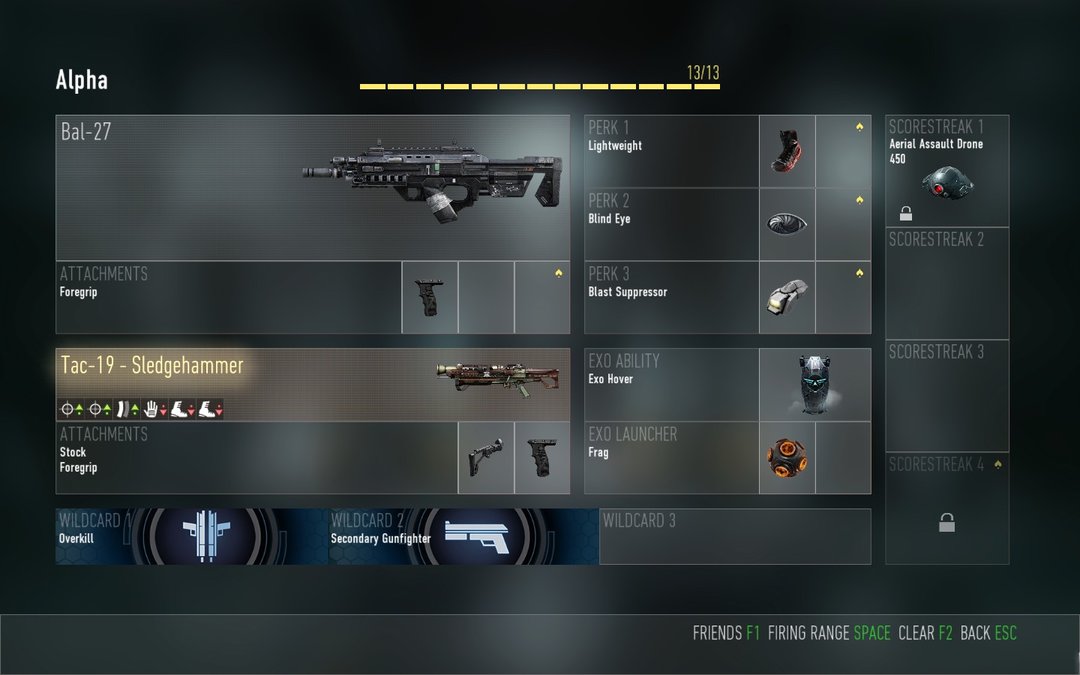 New mode, Uplink, takes the most advantage of the added mobility, having two teams fight over a drone, or super-futuristic basketball. Ducking, weaving and throwing the ball for insta-kills and passes makes for lightning matches of hectic madness. It is the closest thing to actual sport that Call of Duty will come and puts a nice twist on the Capture the Flag formula.

Overall, the few tweaks made to the multiplayer, namely the increased customization, aerial acrobatics and a small increase to base health, make for a slightly fresher feel, but not a completely new affair, and much like an affair, the thrills will quickly wear off if you are looking for something long-term. It won’t win over anyone who has made their mind up about the series, however, it will pull in those walked away with an inexorable siren song, promising further rooty-tooty action. The locking off of future multiplayer modes behind the season pass (zombie mode, I’m looking at you), feels like an annoying cash grab however, letting some of the air out of the balloon.

Call of Duty: Advanced Warfare isn’t a reinvention, or even an evolution. It’s a small step forward the series drastically needs towards something other than yellow brick road campaigns and entrenched multiplayer mechanics. For every bit of hope that Sledgehammer have created however, it also generates equal fear for the next game. What if they take away my jetpack?