Bioshock’s underwater city is back again, but this time with more constants and variables to fit with the tone of BioShock Infinite. In this adventure, Booker and Elizabeth are strangers with a much different relationship from the original Infinite tale which players are used to.

Burial at Sea opens with Booker waking up from his desk with a familiar voice shouting through the door. This time around though Booker does not know the maiden who is about to take him on an adventure around Rapture. Stepping out and seeing the city in a new light is a very pleasant welcome. Seeing the underwater city for the first time feels exactly the same as when you first step into Columbia.

Booker and Elizabeth stand out in Rapture as you are used to seeing them in Columbia but strangely they fit in well. The story, which is woven around the universe, allows players to see familiar sights but also the differences in the time line and story.

The beginning of the game allows you to soak in the atmosphere of the city. Irrational Games have made sure that, just like in Columbia, the city feels real (as real as an underwater city can be). Walk around and see the citizens act out their dialogue and watch the city move and function like it is alive. 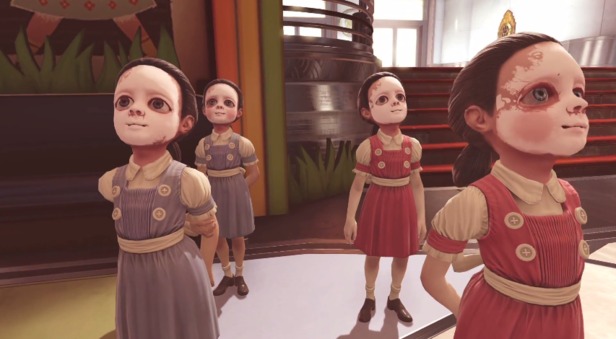 Your mission this time around is forced upon you by Elizabeth. Instead of saving Elizabeth you are looking for a girl called Sally, one who Booker is already familiar with which is explained through the story. Further down the line you are thrown back into the darkness. Splicers are back and are as crazy like as ever. Leaks and broken lights scatter the abandoned parts of the city which you are now a resident of and everything feels like it did back in 2007.

Booker’s search for Sally starts in Fontaine’s building which had been sabotaged and sunk because of Fontaine and Andrew Ryan’s bitter feud with each other. This is where the DLC truly starts and where you also start to see the relationship of Booker and Elizabeth emerge like you are accustomed to in Infinite. Booker once again is the main adventurer, weapon and vigors in hand whilst Elizabeth plays the sporting role once again. Vigors are known in Rapture as “drinkable plasmids” and the Sky Hook is thrown in as the Air Grabber. Infinite’s mechanic aside it was a shame to see an easy rehash of the Sky Line/Sky Hook without much thought as to why it would be needed under water. 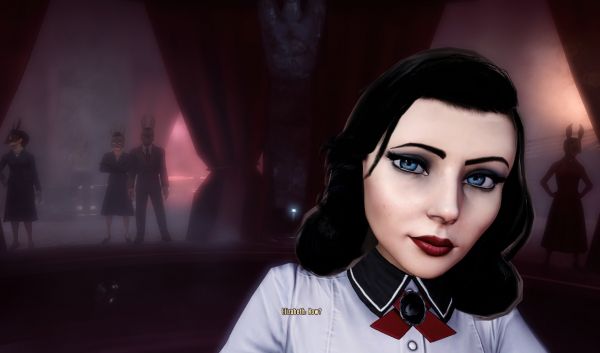 Booker starts with very little ammo, Devil’s Kiss and Possession vigors. The game tries to take a different approach with combat getting you to rely on using the vigour secondary attack by laying traps and sneaking up on enemies and taking them down with a melee attack. Combat is paced differently from BioShock Infinite, instead of going in guns blazing you need to make bullets count and use your vigors wisely. Burial at Sea can make you feel tense, when your back is against the wall while Elizabeth is picking a lock and you are low on ammo with Splicers surrounding you it can be terrifying.

Does she look concerned..

Burial at Sea is very much go to point A then B then C. A linear experience of going from location to location, battling enemies that stand in your way, collecting items you need to progress and then backtracking to overcome an obstacle. No choice is given throughout Burial as Sea Episode 1 and the briefness of the game probably answers why it feels straight forward. It would be nice to have more depth within Burial at Sea but it seems punctuality of game play was the priority. Get through the game, understand the story and have some fun along the way. The little deviations are still there but it was nowhere near as interesting as the original Rapture adventure. Even for DLC the games pacing still felt too quick, more time to explore would not have hurt.

Being able to use all weapons this time around instead holding onto just two is a bonus and the new gun, Radar Range is a little bit of silly fun, heating enemies up until they explode. Being in Rapture without the original plasmids however feels wrong even if the DLC is based in the Infinite world. Gear makes its way back into the game to give buffs and bonuses and can be found quite scattered throughout Rapture on the paths that deviate from the main areas.

Overall the story is very well crafted and has a very climatic finale but BioShock Infinite: Burial at Sea Episode 1 feels far too short even for DLC, feeling rushed towards the end so much so you do not expect the end to be the end. For £11.99 it might feel a little steep for about 90 minutes of game play with little replayability but the production value is very high and the experience is enjoyable.

Finally it takes you back to the place many having been waiting to explore once more, Rapture. Revisiting Rapture and enjoying Irrational’s twist on the world with Infinite’s influence will depend on how you see Rapture personally. Depending on if you like the direction, little tweaks and the changes within Bioshcok Infinite Burial at Sea: Episode 1 might affect your overall experience of the DLC.