Battlefield 1 is the first battlefield game ever made by DICE, however they fooled everyone by releasing it 12 games into the series. This game takes place in alternate World War I, where machine guns are common, everyone has a tank and Zeppelins are the most over powered thing since Doctor Strange in the MCU.

I’ll briefly talk about the single player game, as a Battlefield purist, playing since way back in 1943 (the game not the year), I grew up with Battlefield games being online multiplayers and the single player being multiplayer with bots. The demand for more story driven gameplay is higher than ever thanks to games like Mass Effect and the like giving us in depth stories mixed with engaging gameplay, so it stands to reason that the Battlefield series has started to get their own single player campaigns.

The single player is fine, the characters are mostly relatable if not sometimes a bit bland, but these are modern day game developers trying to recreate the emotions of early 1900s soldiers, there’s a bit of a generation gap there.

The human aspect of the single player is the main focus, telling the stories of ‘real’ people and trying to emotionally engage players like most modern FPS games fall short on. I’ve always found that single player games with multiplayer modes were there to give you a sort of ‘training’ for when you’re ready to go online, and that argument could be made for Battlefield 1. You get to use most of the weapons, drive the vehicles and so on. 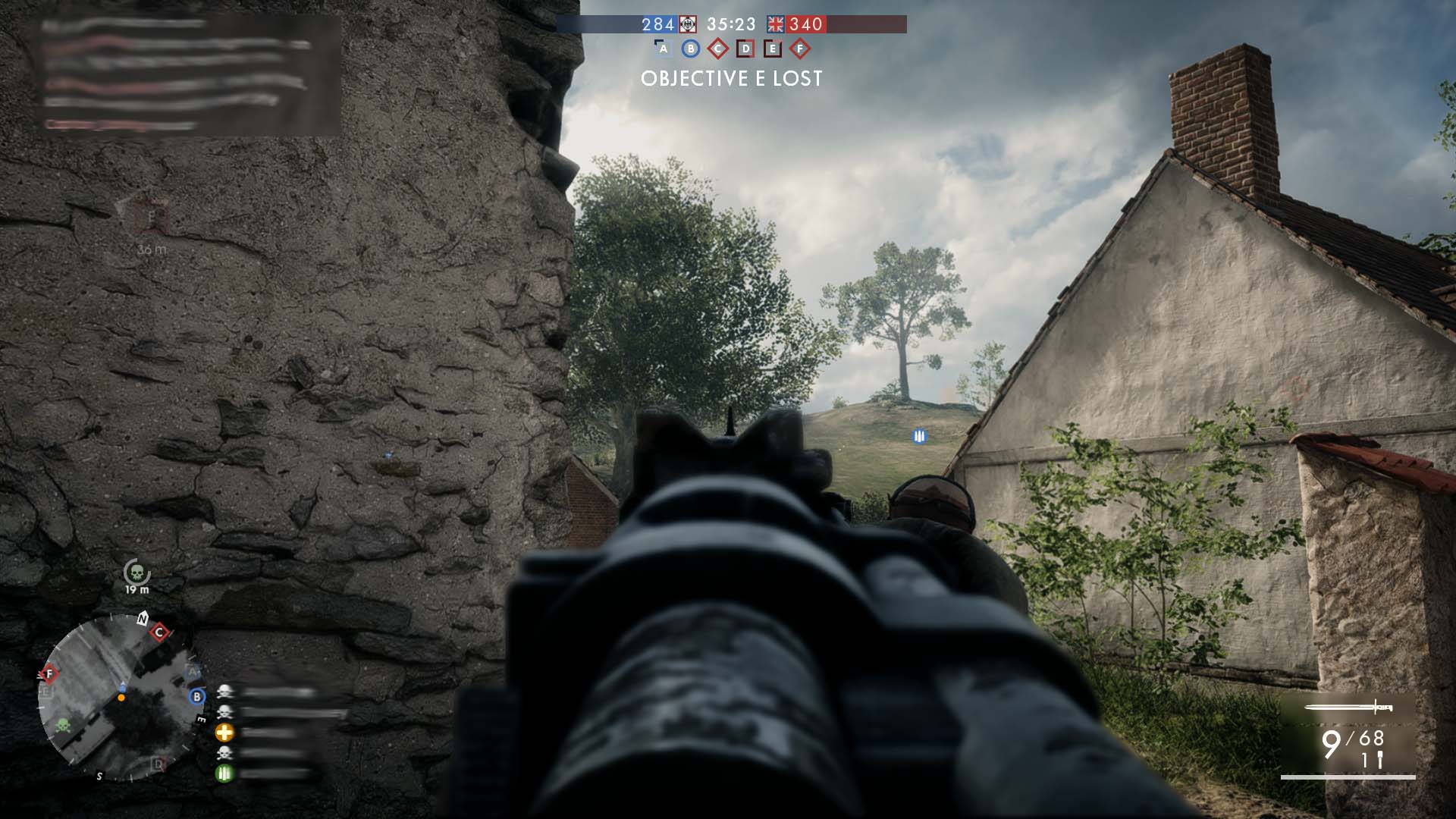 DICE have really tried to hit hard with the horrors of war with Battlefield 1, at least in the opening sequence. When you boot the game for the first time you’re greeted with narration and then a screen saying “you are not expected to survive”. You fight waves of German forces and every time you die, the name of the soldier you were and their date of birth/death is shown. This really hit home when my second character was an 18-year-old, although obviously these characters aren’t real, something about that really connected with me and makes you want to survive even more, even if surviving the front lines of a world war is almost impossible.

Now on to what I consider to be most important part of any Battlefield game, the multiplayer. We have your standard affair of game modes; conquest, rush, death match and so on, but the new addition to the multiplayer and probably the best game mode DICE have ever done are the Operations.

Operations are like Battlefield re-enactments, you have an attacking team and a defending team, much like on rush, but the battles are real battles that actually happened. If the ‘canon’ winner wins the match, for example if the British forces are defending and they manage to defend off each wave of attacks, then the story continues and you move on to the next map with the same teams. However, if the match ends differently than what we know happened in history, the narrator will give us a “what if” scenario for the result of the battle. 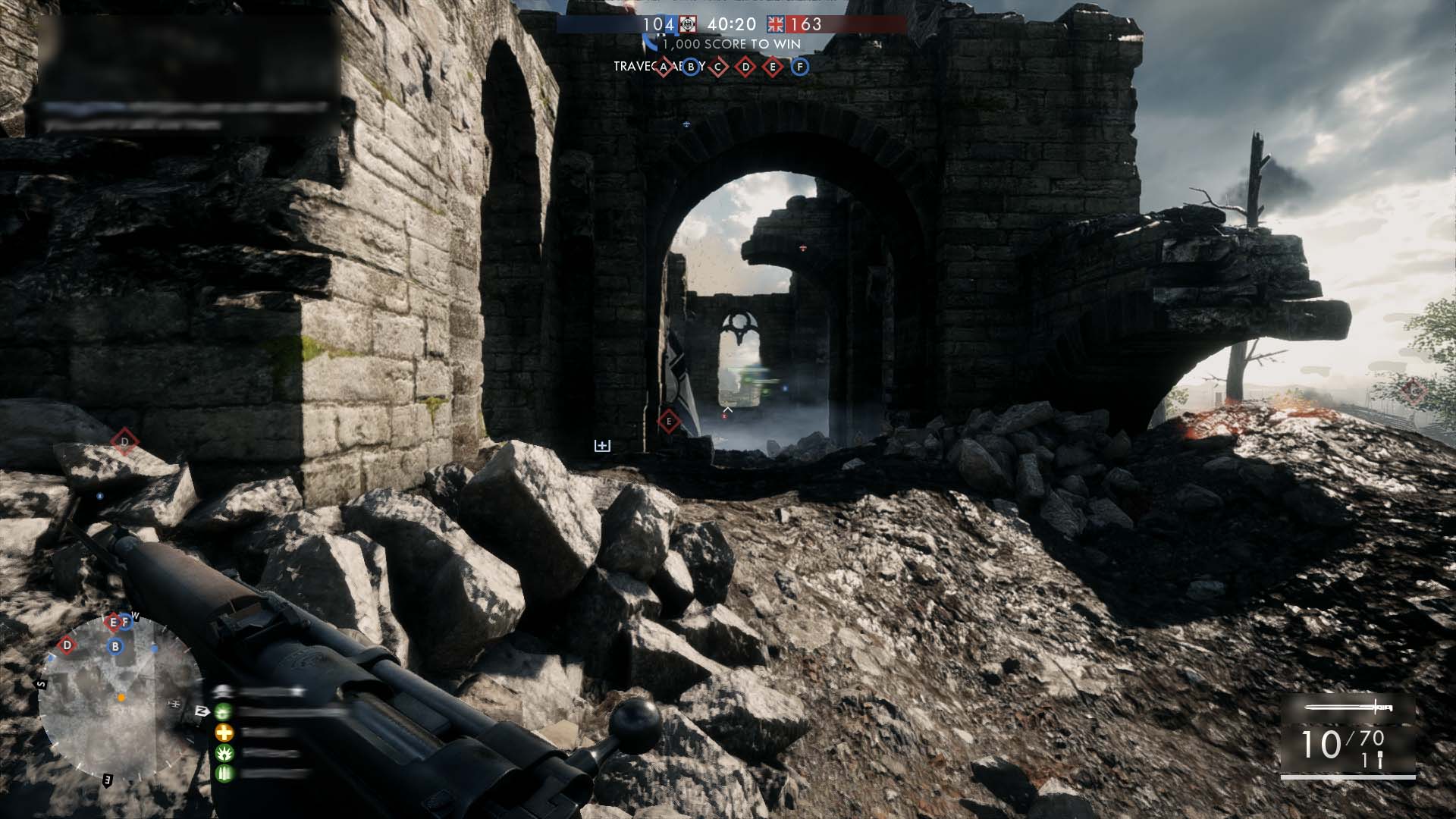 This game mode is the first I’ve seen in a battlefield that actually gives you a motivation to fight. Most games are like “Defend this objective. Why? Because the enemy are attacking it. Why are they attacking it? Because we’re defending it.” With operations we’re given a nice monologue with some sweeping camera shots of the battlefield before the match starts which brings that human elements from the single player and attaches it to the multiplayer in a subtle way, it doesn’t feel tact on it feels like it’s meant to be there.

So the new game mode is the best game mode to date, but how does the game actually play? Well this is the first Battlefield where the learning curve seems incredibly steep. The weapons aren’t the most accurate, the vehicles are harder to pilot or drive, and the battlefields are almost entirely destructible so cover doesn’t last long.

The thing that surprised me the most about the weapons are the inaccuracy of the sniper rifles. Taking the bayonet of seemed to help a little, but that may be a placebo because it’s like that in real life. Obviously the weapons are World War I era weapons, we’ve become much more efficient and made it much easier for people to kill each other since then, but this game does not hold your hand and make it easy like the more modern Battlefield games. The shooting in the game feels reminiscent of the gameplay in Red Orchestra, obviously the weapons are older, less user friendly and more cumbersome, and you can really feel that when you play. 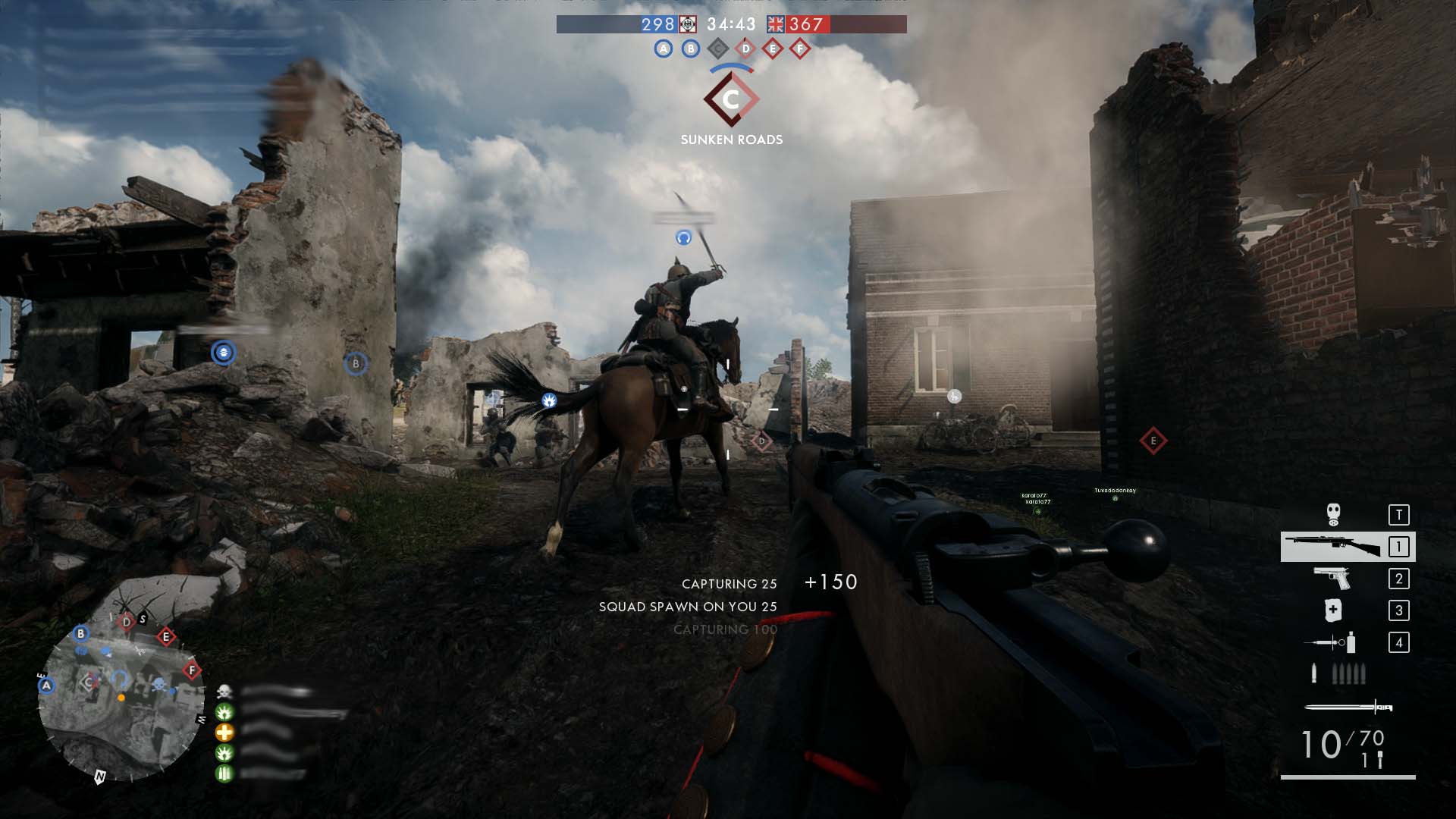 I have to admit there are a lot more automatic weapons in this game than I expect there to be. This is where you need to keep reminding yourself that this is alternate reality World War 1, things happened slightly differently, but I think that making player get used to having to actually aim bolt-action rifles and make every shot count, would make for a much more in-depth and engaging experience. Oh, also, the pistols are hands down the best weapons in the game, if you take your pistol out, the enemy is dead.

Another new addition to the Battlefield franchise are cavalry in the form of one or two horses per team. The horses seem a little bit overpowered, they take bullets like an absolute champ and a skilled cavalier can wipe out a squad with his sword without breaking too much of a sweat. I feel that DICE maybe should have upped the number of horses in the game in exchange for maybe one tank per map per team, because the tanks are ridiculous. Don’t get me wrong, they take damage from a lot more things in this game, but they can easily wipe an entire team if looked after and tanks were a rarity in World War I (alternate World War I, just keep saying it, alternate, alternate). 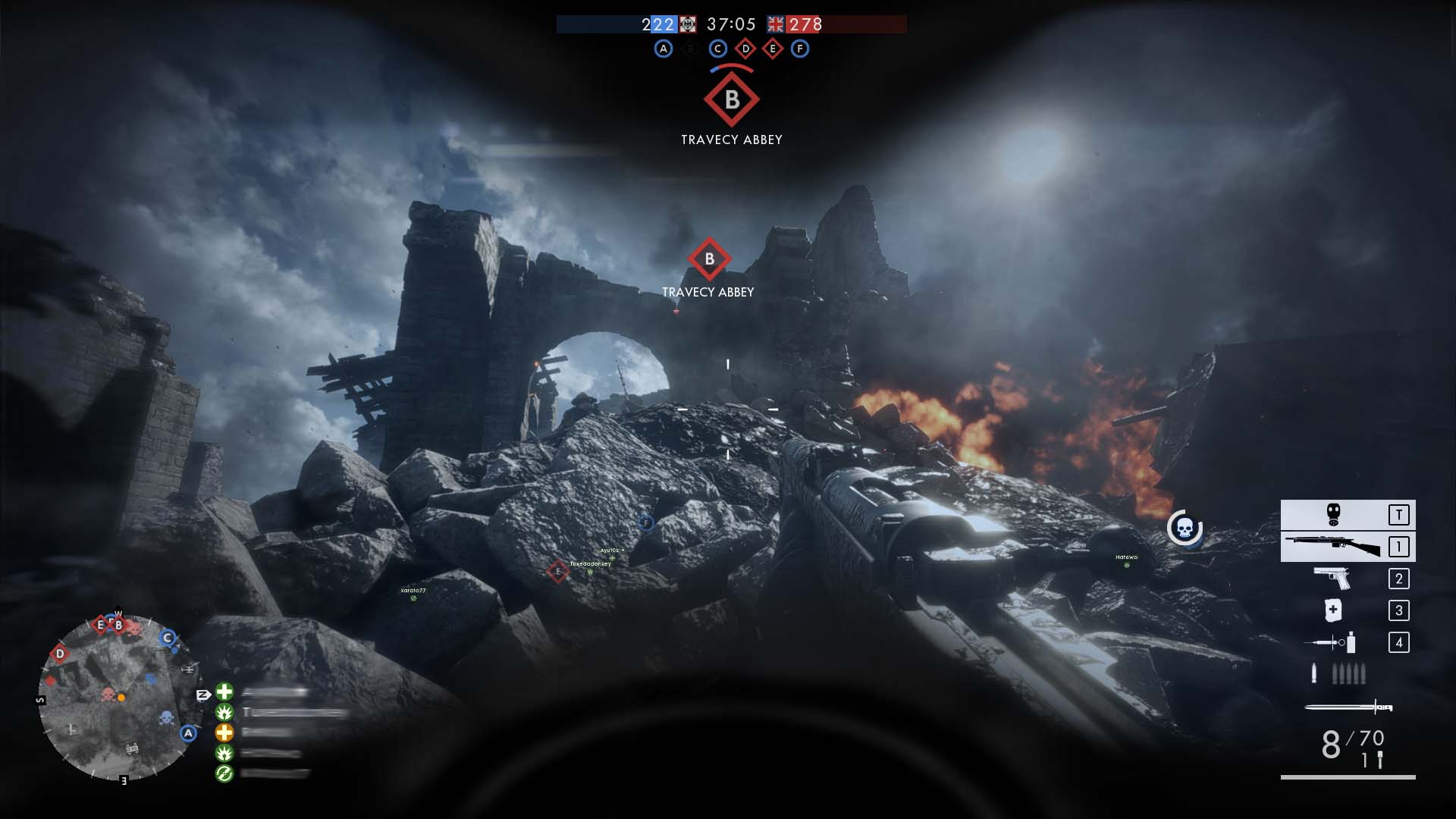 Gas is another new addition to the multiplayer of Battlefield. Gas makes your vision blurry, slowly drops your health and, in the worst case scenario, kills you. However you can equip a gas mask to counter act the gas and they always work, although the RNG of a broken gas mask would have fit well into the world of World War I. The main issue with the gas mask is that you can no longer aim down your iron sites. This is a problem because it makes you very exposed and almost impossible to defend yourself, if your character could at least attempt to aim down sites, even with lower accuracy, it would balance the use of gas a little better.

Special class drops also appear around the map allowing you to be a heavy trooper or a flame trooper. These sound like they’re right out of Star Wars but they’re soldiers equipped with heavy armour and flamethrowers with a pretty decent range to them. Woe betide the soldier that tries to fight these one on one close range. They are very fun to play, and very not fun to play against, not completely game breaking, but can certainly ruin your day to come up against one.

The final new inclusions to the multiplayer modes are the zeppelins and armoured trains. These are weapons of mass destruction. They can turn a tide of a battle to the point where the battle is completely unfair, again they can be taken down but it is one hell of a slog to try and do so. These weapons are like huge gun-ships raining terror from above or from the ground in the case of the train and they do so much damage, can kill every soldier in one shot, destroy building and vehicles, there’s not a lot they can’t achieve except actually capturing objectives. Trying to find a battle opposing a zeppelin is also near impossible because you’re either trying to keep an eye on it and miss something happening on the ground, or you’re focusing on a fight and then bam, death from above. 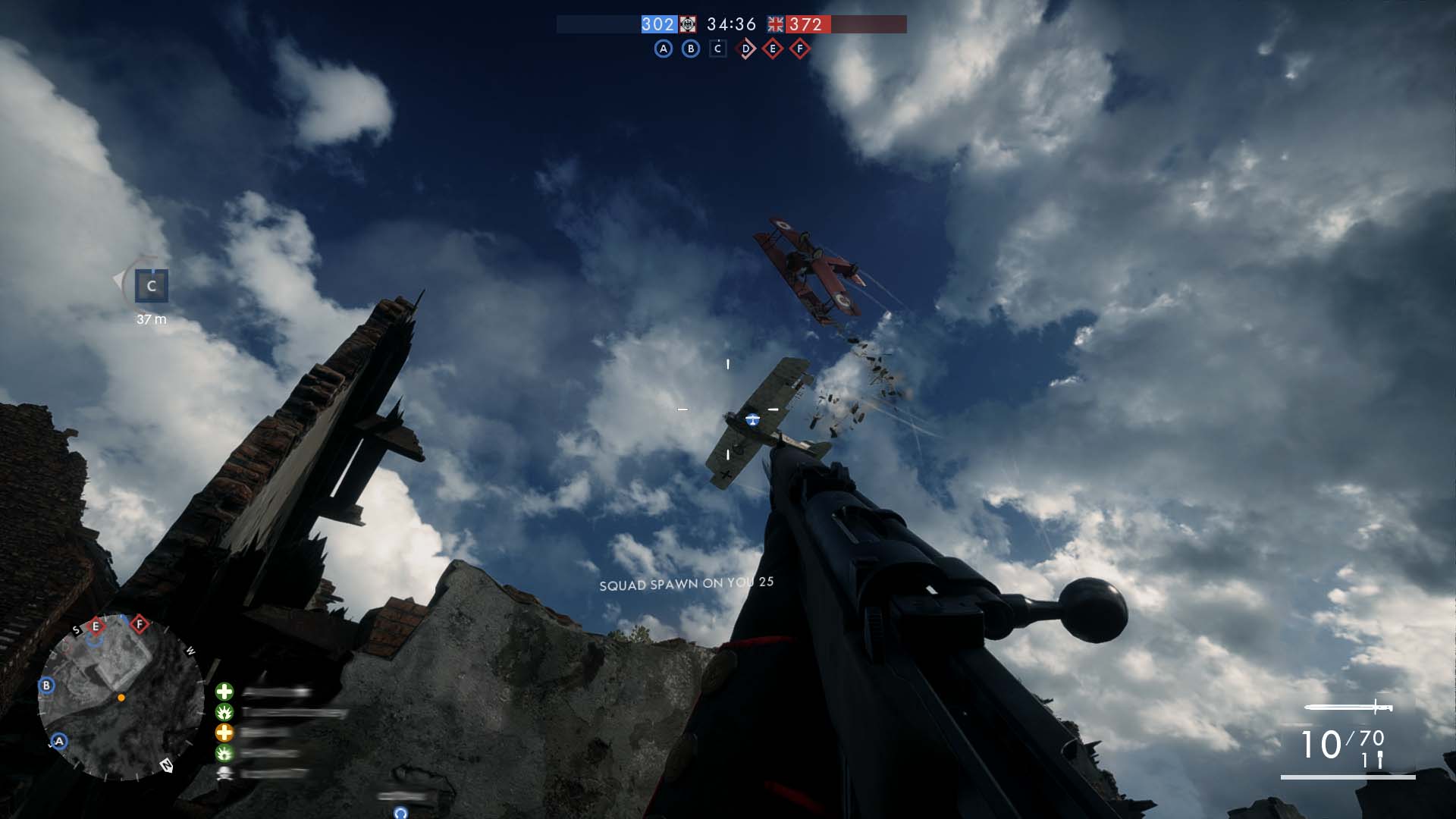 All in all, Battlefield 1 breaks into the oldest new ground we’ve seen put to modern FPS games. The single player is enjoyable but not necessary if you’re a purist you can enjoy the game to the full without ever playing the campaign. The learning curve in the multiplayer will be a breath of fresh air to some, but will be a big let-down for others. Battlefield 1 truly has a ‘us’ and ‘them’ mentality to it. It’s either the best Battlefield they’ve ever made, or the worst one in the series, but to find out you really need to play it yourself and see if you’re made of the kind of stuff that World War I soldiers are.

A very solid FPS that breaks some new grounds but definitely has its issues. Worth picking up for Operations mode alone.