Instead of leaping forwards in time, Assassin’s Creed IV :Black Flag takes a step back by focusing on the well received ship captaining segments of last year’s Assassin’s Creed III and expanding on them. Black Flag deviates from series’ norms and does so well. So well in fact that it makes the series flaws even more aggravating, holding the game back from being something great.

It is the hay-day of piracy on the West Indian Sea, and Captain Edward Kenway wants to make a fortune. Leaving his family home in England, Edward sets of to make his wealth on the high seas, deluded by dreams of grandeur and wealth. It isn’t long before he becomes entangled between the eternal Templar/Assassin war. It repeats the storyline of finding a magic Macguffin before the other guys, while occasionally talking about the nature of free will and control, without really discussing it in any depth.

The story departs from series expectations to an extent, while being told by a number of entertaining characters. Instead of the usual goal of “find and kill this group of men for revenge”, Edward’s adventure is far more vague, and displays both the Templars and Assassin’s at their most morally grey. Sadly this doesn’t automatically equal compelling however, with Edward constantly droning about “I must find plot point Y” and supporting characters rarely being given enough time to shine. Edward himself is a compelling protagonist though, even if his dialogue is mostly “tell me where this is”. His more lucid role around the Templar/Assassin war, as well as his conflicted nature about wanting to provide for his wife while living a carefree life, makes him much more developed than his grandson Connor.

Business as Usual For The Assassin’s Creed Series

With fellow pirates such as Blackbeard and Calico Jack being a advertised, you would expect them to take up a significant part in the story, which isn’t really the case. The first two thirds of the plot cover Edward’s exploits as a feared pirate, but doesn’t really go anywhere meaningful or interesting. Faces come and go, with the muddled tale of pirate camaraderie feeling like dead air. By the time these plot threads are beginning to tie up, the game hurriedly scrambles to make it all feel like it was worth something, but instead makes the final hours seem rushed and the narrative cramped. The conclusion almost seems like a non-ending, with little in the way of dramatic pay-off.

The same can also be said of the framing narrative, which has taken a surprisingly meta turn. Instead of Desmond Miles, you now see the modern world through the eyes of an unnamed, faceless Abstergo employee, tasked with diving into Edward’s memories to create what is basically a video game based on the experience. Ubisoft have created and published a game in which Assassin’s Creed IV: Black Flag is a game they created and published, which is just as silly as it sounds. It serves to reset the slow escalation that Desmond’s tale was taking, and does little to push the modern day story forward, so don’t go in hoping to find answers. Here it feels like Ubisoft set things back to zero to squeeze more games out of the series. 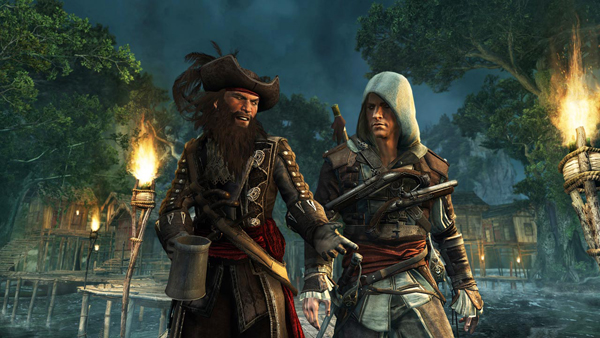 Blackbeard Chews The Scenery Often, Which Makes It Even More Disappointing He Doesn’t Appear That Much

Thankfully the core gameplay has become much more focused. While the majority of the game is spent sailing the seven seas, the on-foot sections benefit from the cutting of superfluous features and tightly designed environments. The three cities of Havana, Kingston and Nassau are much smaller than in past games, which has allowed the design to become more drawn in. Each city looks stunning, with little wasted space. Every square inch is scattered with collectibles and activities, from messages in bottles to bar brawls.

Combat has gone mostly unchanged, but extra weapons have been thankfully cut, keeping them to a minimum. The combat system itself though is completely untouched, still focusing on counters and kill chains. The mechanics are in dire need of an overhaul, having been reused without major changes over five games.

The main draw however comes from the introduction of naval exploration. The same level of detail and density given to the cities extends to the huge map of the West Indies. Sailing your upgradable ship, the Jack Daw, can often be a thrill. Pirate hunters, convoys and bad weather rarely make going from point A to B eventless, keeping cabin-fever from setting in. Ship to ship combat is fast and frantic from cannon fire volleys to killing the enemy captain. These scuffles reward Edward with raw materials that can then be used to purchase upgrades and trade. Other smaller activities like destroying forts, diving to underwater wrecks and discovering lost isles make for plenty to do outside of the main story missions. However, all of the collectibles from these activities rarely seem worth the payoff. Animus fragments, messages in bottles, Mayan Stelae, chests and sea shanties may keep you busy, but the rewards aren’t often clear and sometimes don’t reward the hours spent tracking down all of them. The point of collecting X amount of Y comes from feeling like you are working towards something, a concept Assassin’s Creed: Black Flag doesn’t seem to grasp.

The main missions however are much more fulfilling, even if they also begin to run out of ideas near the end. Stealth is now a more viable option. Generous blend zone locations and the upgraded eagle-vision that lets you mark targets make going unseen a breeze. Missions span multiple objectives, with some that may begin with you infiltrating a Templar stronghold and end with you sinking Man O’War’s. Sadly however the most imaginative missions come at the start of the game, with later missions having you tail target after target.

This Never Gets Old

Audio design is rather sparse, something that echoes the games often quiet beauty. Towns and ports bustle with life and chatter, which contrast to the scattered activity of the ocean. The sun-soaked sands and ever blue horizon push the hardware further than in Assassin’s Creed III, as well as having impressive water physics. However, the lack of audio while at sea can make the world feel strangely empty, even as you spot ship battles in the distance and whales leaping above the waves Sea battles may crackle with bombast and bravado, but when it is you and the ocean blue things can sound very boring. Thankfully sea shanties can alleviate the drudgery, but that doesn’t prevent the audio from cutting out. Music and sound effects disappearing became a constant issue, one that was only fixed by relaunching the game. Some of the games most dramatic moments were ruined by the appropriate audio not playing, immediately ripping away any sense of immersion.

Assassin’s Creed IV: Black Flag does a lot of good for the series. The Jack Daw and ocean exploration bring something fresh, with stealth gameplay standing head and shoulders above any attempts in the past. The shortcomings of both narratives sadly drags the experience down. While Edward himself is a compelling protagonist, the war between the Templars and Assassin’s is sadly rather dull. Missions eventually fall prey to the same drudgery as well past the first third As it stands though, this all puts damper on what the rest of the game attempts to achieve. If Ubisoft took an extra year to fix this series long-standing problems, perhaps the next game could reach its previous greatness. Iterative releases are making the glaring issues with the series become much more obvious, and it will take much more than pirates to fix them.