In the first few years of the PlayStation 2’s lifespan, two musical rythym games named Frequency and Amplitude were released by Rock Band developers Harmonix. Although both games received widespread critical acclaim, the series fell into obscurity until last year, when Harmonix decided to reboot the series through KickStarter. The campaign was an amazing success, and the fruits of their labours were released last week on PlayStation 4. The only question that remains, is the new Amplitude a sound that will be remembered, or will it be forgotten like the B Side from a one hit wonder on the other side of the cassette?

Like many rhythm action games, Amplitude is simple to learn and difficult to master. After choosing a Beat Blaster ship, the player must ride along a set of pathways that move in relation to the speed of the song. Each pathway represents a piece of the music track, such as the Drums, Vocals, Synth or Bass. When you have selected a track, you must destroy the note gems with correctly timed presses of either the shoulder or face buttons. Once you have cleared a certain amount of gems from a pathway, it will temporarily disappear, and that element of the track will play until the note gems return. No matter which difficulty you choose, the task of ensuring that each track plays perfectly, and obtaining a large combo is highly addictive. In my opinion, this approach is much more engaging than the Rock Band series. This is of course with the possible exception of Rock Band Unplugged for mobile devices, and Rock Band Blitz released on the PS3 and Xbox 360, which were Amplitude in all but name. 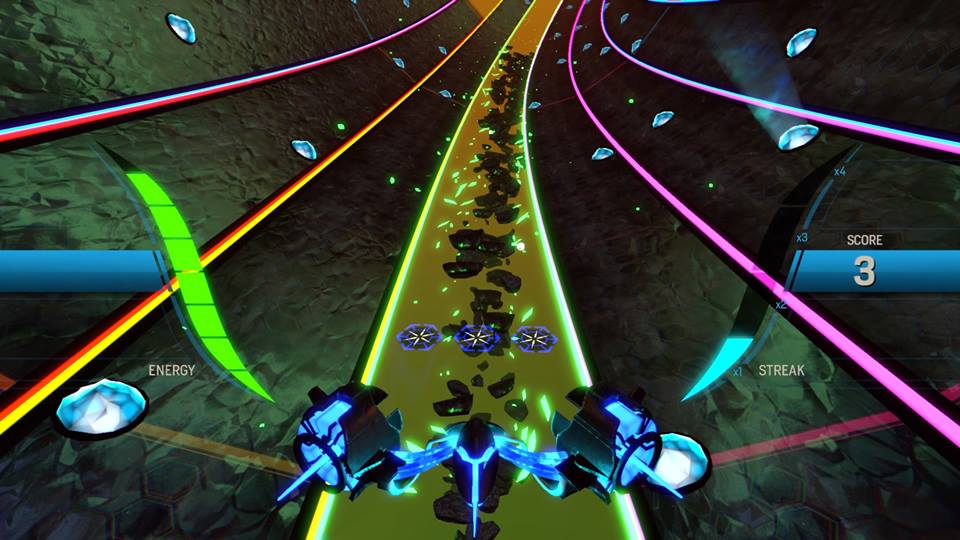 Unlike it’s older siblings, Amplitude includes a Campaign mode with a loosely connecting Fantastic Voyage style narrative behind the scenes. The main aim of the Campaign is to play through a fifteen track concept album created specifically for the game, and if you manage to complete it successfully, you will restore the mind of a comatose patient who has undergone physical trauma because of an unknown incident. While it isn’t uncommon to see a game tackle issues such as this one, Amplitude does it without any unnecessary drama, and allows the player to progress through at their own pace to complete the main storyline.

As you move through the Campaign Mode, several new tracks and gameplay modes become available. Possibly one of the best of these bonuses is the Freq Mode, which moves the pathways into a rotational tunnel-like structure instead of a flat road like surface that is the default aesthetic. While this change does not offer any gameplay alterations, the Freq Mode is a great option to alter the aesthetic and encourage you to play through the Campaign Mode for a second time. Several powerups also become available as you play through the songs, such as the ability to clear a path without hitting any notes, slowing down time and increasing the score gained when you have achieved a larger combo. If you would like to play with friends, there is a multiplayer option in Freeplay mode with both local and online options, so you can have the best of both worlds. If you would rather just compare scores, the obligatory online leaderboard has also been included.

From a graphical point of view, Amplitude uses a similar art style to that of its predecessors, with the only modification being that it has been given a high definition facelift to meet the standards of the current generation. Thanks to the power of the PlayStation 4, the visual sequences behind each of the tracks look better than ever, with several visual effects such as fireworks and visible sound waves coupling with the virtual neural pathways. The only criticism I would give is that it does not appear to be as bright and colourful as the PS2 originals. It is possible that Harmonix wanted to go for a darker tone, especially with the Campaign mode’s central theme, but the lighter colour palette seemed to be more appealing to the eye, and inspire me to continue playing the game for long periods of time. 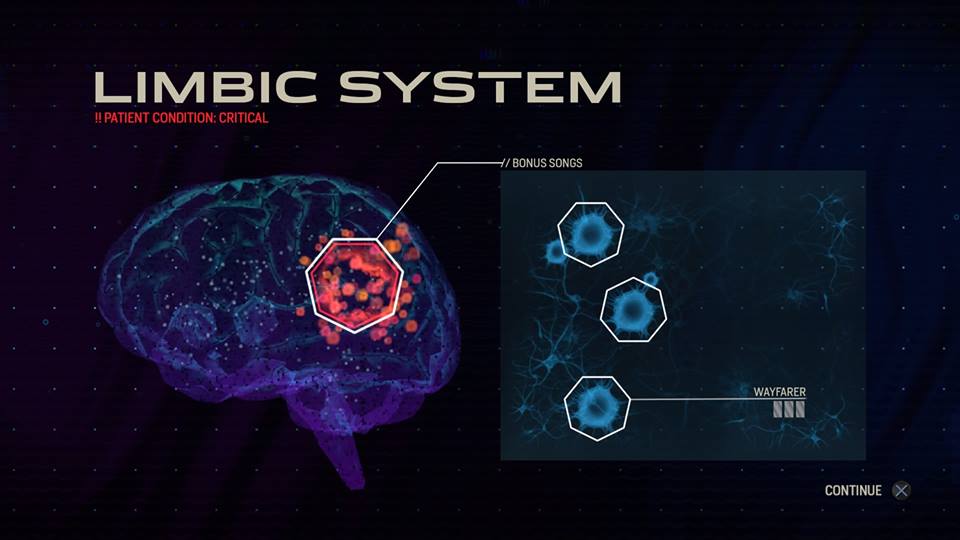 First and foremost, Amplitude is a game that relies on music, and thankfully the soundtrack that you play through does not disappoint. If you are expecting to hear artists such as Garbage and No Doubt that were featured in Frequency and Amplitude, then you will unfortunately be disappointed as the budget would not cover half of the royalty costs required for such a move. Regardless of this fact, the musical interludes that are locked to each level are extremely creative, and each one brings a distinct style that fits perfectly into a virtual reality universe. While some of the more bizarre songs may not suit everyone’s taste, it is wonderful to see a company like Harmonix is connecting with their audience, and allowing smaller music producers to make their mark.

Overall, Amplitude is one of the best examples of a reboot to date. The core mechanics have remained intact, as well as the high quality music and fast paced rhythm action that we first grew to love back in 2002. The unlockable extras and additional modes are definitely worth the effort, in particular the bonus tracks provided by some of the industry’s best loved composers. If you played the original games, or if you are even remotely curious as to what the fuss was all about, then I can safely say that Amplitude will not leave you disappointed.

If you have been waiting for a rhythm game with style and a stellar track list, Amplitude has both of these in spades, as well as a host of extras and additional options to keep you coming back for more.