Today, in the high-tech society that we live in, a lot of what we do is accessed through portable devices, from checking emails and browsing cat gifs on our phones to gaming on handhelds like the PlayStation Vita and Nintendo 3DS. Solar chargers like the Powertraveller Power Monkey have been around for a while, now, but with the increasing reliance on electronic devices they have become more popular with everyone, from the adventurer/hiker to the average Joe.

The Powertraveller Power Monkey is a high power, high amperage solar powered charger designed for the fisherman, adventurer and all round outdoor enthusiast. We wanted to take a look at it to see if it had any merit for the gamer.

Gamers have increasingly started to game on the go whether they’re on their Vita, 3DS, or mobile. While this is great news for busy games, the real downside to mobile gaming is the freedom you lose when away from a power source. Instead, you are at the mercy of your device’s battery capacity.  If that runs out and you are away from home or a place connected to the grid, your device becomes just an expensive paperweight or mirror (if the screen is shiny).

What is in the box?

Powertraveller’s Powermonkey Extreme is one of the higher end solar chargers, and it was chosen because gaming devices are hogs when it comes to power. Due to their nature, they rely on a regular charge if you are a heavy gamer, so having a device which stores 9AH of power was needed if you were away from civilisation for an extended time.

So what do you get?

The Powermonkey Extreme comes in two parts; the battery and the solar panels. Out of the box the Powermonkey Extreme can output 5V 1A and 12V 800mAh. As electronic devices are now requiring more current, Powertraveller have also included the Gorilla pad which allows 5V 2A and uses the 12V output. What this allows is for newer devices like the iPad and smart phones, like the Note 3, to be charged correctly. The solar panels can output 3 watts which is used to top up the battery using solar. 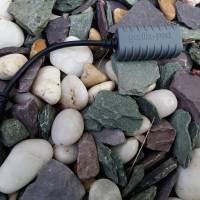 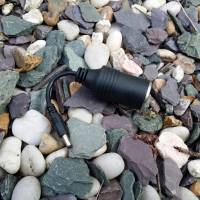 The battery pack is waterproof, not water resistant, so it will withstand getting wet. It is also shock resistant, which together make a pretty solid companion out in the British weather. Recharging the battery pack can be done via the solar panel, USB or the mains charger, which is supplied.

Powertraveller’s Powermonkey Extreme also comes in a range of different colours if you are one for matching sets of items. Blue, black, red, grey and yellow are all available, and all come in the same rubberised coated design.

The full kit out of the box comes with:

The travel case is extremely useful and you can see that Powertraveller have the explorer in mind. The travel case fits the solar panels and battery pack with an elastic Velcro strap to keep it all together. There is a little room for additional cables and tips, but no space seems to be made to specifically include them. It is more a case of finding the remaining space in the travel pack around the solar panels and battery. This is not a major issue, as taking every cable and tip is probably what backpacks are for. However, all the additional tips do come in their own sealable pouch to make sure they do not get lost. 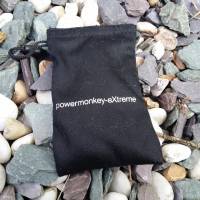 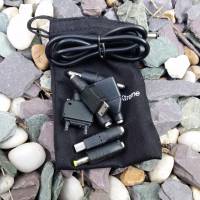 The one missing tip for a gamer would be the PlayStation Vita’s. Though Powertraveller have a wide range of tips via the tip selector on their website, for Sony they only have the PSP/Go connectors which are a little dated. Luckily, I tested the Powermonkey on a Vita using the USB cable that comes with the Vita. However, for those that would not want to carry round an additional cable, Powermonkey would do well to update their tip selection to include the Vita.

As the Powermonkey has a built in female USB connector, pretty much anything 5V should be able to connect into the battery pack. This was a great design choice on Powertraveller’s part, meaning you do not rely on the company’s special tips and cables. Instead you can use them as a means of ease and space saving.

Using the PowerMonkey is very easy with its LCD screen that lets you know how much battery life it has left and the touch panel interface. This was primarily a design choice to allow people to use gloves while using the device. To charge a device once you have it all connected, all you do is swipe from left to right on the touch interface and the screen will flash three times. To stop charging and turn off the PowerMonkey you just to the same action in reverse, swiping from right to left.

In an age of touch screen devices this will be very user friendly. Simple commands via touch to control the device make it completely hassle free.

Hooray for the summer! Testing the Powermonkey would have been a lot harder if we got this in the winter time in Britain as there would be no sunlight to see how well the solar panels work.

Luckily, this has been a good summer and a great chance to test the Powermonkey’s capabilities. The solar panels according to Powertraveller can supply 33% of charge in 6-8 hours in good sunshine. Also featuring MPPT or Maximum power point tracking technology even on cloudy days, the panels will still charge the device but it can take much longer.

When testing the solar panels in direct sunlight for about 8 hours the unit did indeed charge to about 30% ranging from 30-35% depending on sun light conditions. This is down to the amount the panels can do and 3 watts is a trickle charge in the eyes of solar panels. For a 9Ah battery, however, it would be more than enough to keep you going. Unlike other chargers the Powermonkey does support daisy changing, meaning you can charge your devices while charging the battery off the solar panels. This is great to be able to squeeze every drop of extra juice into your device.

In cloudy conditions, it could take up to three times longer to get to the same charge. Compared to some cheaper solar chargers I have tried, that is really good. The cheaper ones would barely charge, if at all, in cloudy conditions. It is also worth noting that trying to charge through a window is almost impossible due to most glass in windows having UV filters, so charging through a window in direct sunlight for 8 hours will only provide about 4% additional charge. The Powermonkey, as with any solar panel technology, needs to be in direct contact with the sun’s UV rays.

The backup for the cloudy days is the mains and USB charging. On those days being able to charge the device over night at home knowing the battery can support 9Ah is a good compromise in the dull weather.

The PlayStation Vita is something I use every day on the way to work. Sitting on the train or tube commuting, it is a much needed companion. The battery life on a Vita is not massive, weighing in at 2.2mAh, which allows me about 4-6 hours of game time.

The Powermonkey, in theory, has nearly 4x that amount of battery capacity allowing me to charge the Vita 4 times before the Powermonkey’s battery is dead and must be charged again. To get it to charge, though, you will need an additional adaptor called PISEN USB battery charge adapter. The reason for this is the way the Vita works with charging from devices other than a PC.

Good news is that, in testing, the Powertraveller was able to deliver 3 full charges with some juice left to spare. From a full test with a 100% battery charge and a nearly depleted Vita it charged the device completely, leaving 67% charge left. While gaming this did drop a lot quicker as it would be charging the device while it was in use. I also had to use the Gorilla pad adaptor to be able to supply the Vita with enough current.

The standard way without the adaptor worked but only when the Vita was switched off while charging through the Powermonkey’s battery.

In the wake of mobile gaming a lot of people are spending their free time on their smart phones playing a whole host of different games. From the candy killing kind to the AAA experience that games like BioShock bring, they all have one thing in common; they kill the battery of smart phones. Even without the gaming, smart phones are becoming increasingly packed with features which are constantly draining the battery.

The mobile phone used was the Note 3, one of the more recent smart phones with a massive display and even bigger battery. With a 3.2mAh battery, the Note 3 requires a lot of power and once again the Monkey Extreme is able to accommodate this power requirement.

A couple of tests where done with the phone and the outcome I have placed in a table for easy comparison below.

While the phone was on:

Test 2 – While the phone was off and drained:

The PowerMonkey does goes beyond expectation when the device is off, only draining around 30% of its charge when the phone is off to fully charge it. When the phone is on it takes longer for the device to charge and experience a bigger decrease in power stored in the battery pack. However, this is to be expected when using your phone and charging it at the same time. Overall, from the tests while on the phone, it would probably get 2 full charges from the battery pack and 3 when it is off and not in use.

Having tried other solar power chargers in the past, I was sceptical about this one and the price point. That said, Powertraveller’s Powermonkey Extreme is a perfect device for the hiker and adventurer, with a power need on the go always being the main focus. All wrapped in an easy to use, attractive and rugged device. Due to its design focus, it will make a great companion for anybody looking for power while travelling. Be it on the train, walking, camping, flying or the zombie apocalypse.

For a gamer/tech enthusiast it is a great accessory to make sure your devices always have some juice in those critical moments. At a gamer’s convention or press event, the PowerTraveller was a relief to have in my backpack. For the gamer, it allows them to game on their phones or handheld consoles with less restriction on where they have to be at a certain time without losing that critical save before the console dies.

At £120 the price might seem high for the average consumer, but for the quality, capacity and care that has gone into the Powermonkey, it is a good investment. The only downside would be lack of space in the travel pack for additional cables, the Gorilla pad and tips. It will fit one or two cables and the tips but in no way would support the cigarette adapter or gorilla pad.

Having extra support for the handheld consoles like the Vita would increase its usability and if it can charge the Vita without the need for a third party adaptor it would be the strongest portable charger for gaming on the market.

Overall it is a device without any major faults. It does exactly what it was designed for and does it very well. So if you are looking to always have some form of additional power nearby for your handheld devices, then this is a product you need in your life.