Logitech’s G510s is the latest addition to their arsenal of gaming hardware, sitting in nicely in the middle of their keyboard range with a RRP of £99. It’s by no means the most expensive keyboard on the market, but it’s still a lot of cash to sink into a gaming peripheral, so is it worth the price?

First impressions are good with Logitech’s familiar X-ray look packaging doing the job of drawing the eyes, though as almost all hardware is bought online these days it’s never going to be the thing that draws you to the keyboard. Still, professional packaging is the first sign of a professional product and Logitech are on target so far.

There is only one extra worth noting with the the Logitech G510s, a wrist rest. The keyboard is fairly comfortable in its own right, but if you feel you need a little extra wrist support then it does come with a clip-on wrist rest. This wrist rest does add extra support and whilst we had no problems, long term users of the G510 have noted that the clip-on design leads to the clips breaking over time. Also be aware that the wrist guard will add a significant size to an already fairly chunky keyboard, so if you have a small desk you may want to look elsewhere.

Delve into the box are you’ll be greeted by the Logitech G510s itself, an instruction booklet to throw into a draw and an extended wrist rest that can be added to the front of the keyboard. Connection to your PC only requires a single USB connection, which is nice considering many keyboards sporting an LCD screen require two of those precious little ports. 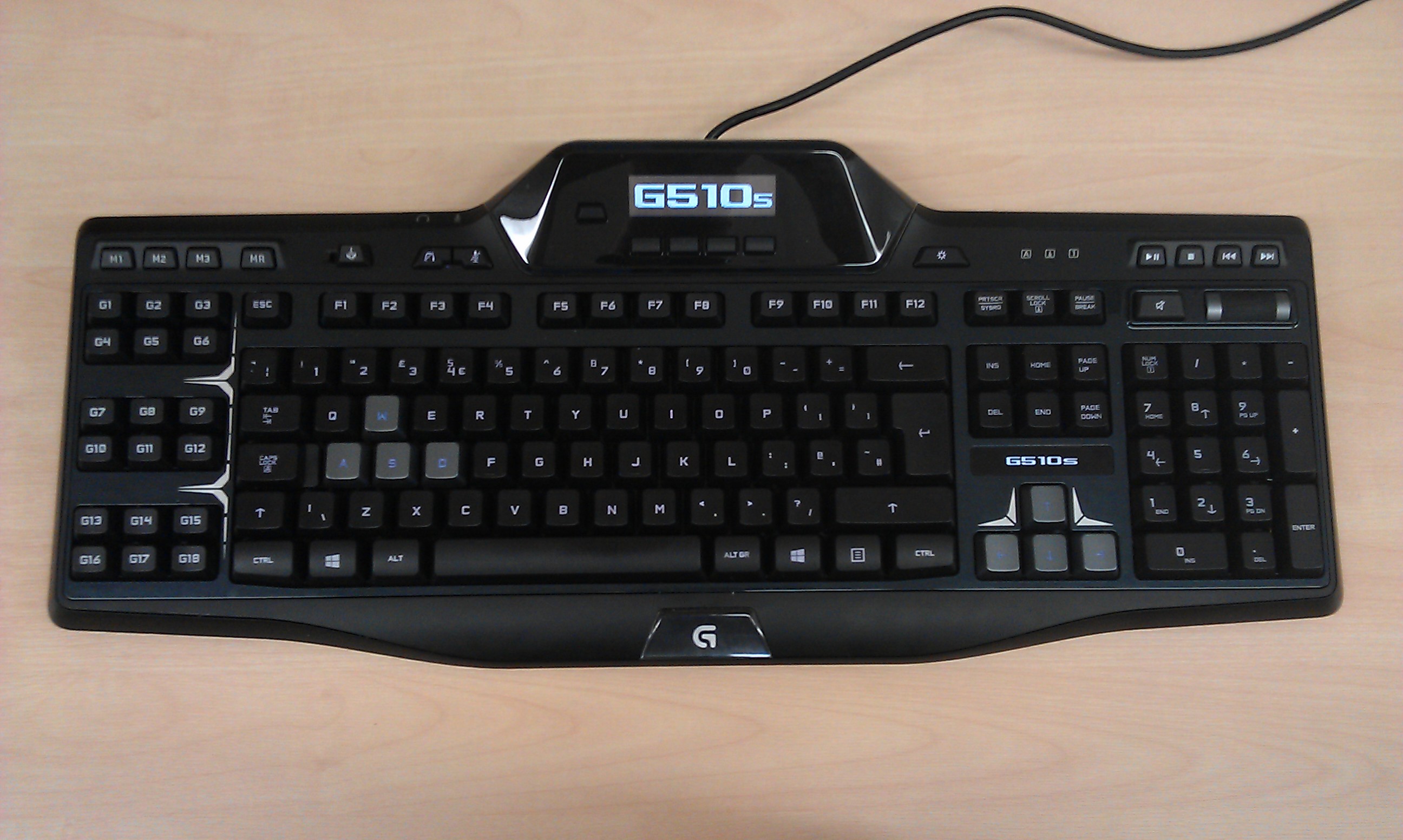 Once you sit down in front of your shiny new Logitech G510s, a couple of things will stand out to you. The centre of the keyboard is headed by an LCD screen which proudly displays the keyboards name. Get used to that being the only thing ever displayed on that screen because it is almost entirely pointless. The only useful information you’ll ever really want to display on the screen are boring things like the time, GPU, CPU and memory usage etc. Screens on keyboards just don’t work, because when you’re gaming you really should be looking at the screen, not the keyboard. The screen itself isn’t that great either as it’s only a monochrome screen, very reminiscent of an old high school calculator.

That gets the negatives pretty much out of the way though; it’s (almost) plain sailing from here for the Logitech G510s. Aesthetically the keyboard is bit of a Marmite thing, you’ll either love it or you’ll hate it…or you’ll be pedantic and say you think it’s alright. If you’ve been playing a lot of Hawken recently, you’ll feel right at home with the Logitech G510s which has been lifted straight out of a mech walker. However if you’re looking for something a little more stylish then the Logitech G510s may not be to your taste.

On the left side of the keyboard are 18 programmable keys which should be enough to keep even the most hardcore of PC gamers happy when it comes to those all-important shortcuts. 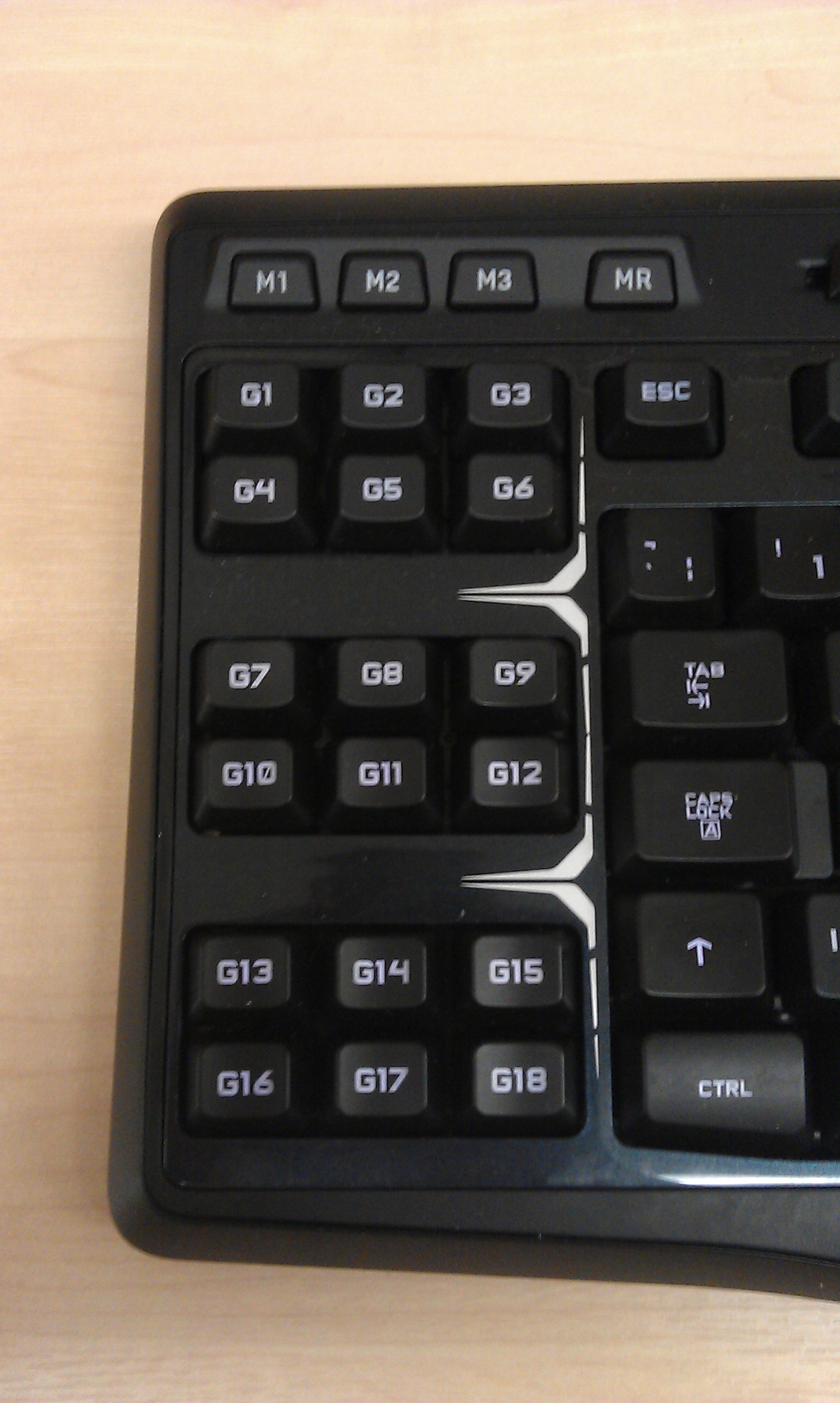 The positioning of these keys means that they are easily accessible and unmistakable due to the defined gaps between the blocks of keys. You don’t
want to be mashing the escape key instead of G3 in the middle of a fight now do you? To make doubly sure you don’t press something you shouldn’t have mid-game, the G510s comes with a game mode switch which disables the windows key. Jump over to the other side of the keyboard and you’ll find a selection of media playback keys and a volume wheel.

The keyboard also has audio input ports allowing you to hook a headset directly into the back of it, as well as keys to mute your mic and to mute to disable audio in the headset. Sadly there are no USB ports present on the Logitech G510s but again as it only uses one USB port this isn’t a huge issue.

The keys themselves are quite old-school; tall keys which depress significantly when pressed as opposed to something like the Razer Deathstalker, which has quite shallow keys. Whilst not a mechanical keyboard, the G510s does have six-key anti-ghosting to prevent keystrokes from being missed in the middle of an epic multi-key manoeuvre.

The keys are also backlit, with Logitech boasting that they can be configured to 16 million colours, which is all well and good but unless you’re in a dark room you won’t be able to see them. Now obviously backlit keyboards aren’t designed for bright environments, but as I type this on my Razer Deathstalker Ultimate in a brightly lit room, I have no trouble seeing that lovely green glow from my keys. The G510s’ backlighting is pretty much unnoticeable in the day, which is a shame.

The backlighting and LCD screen require a software package to be used, which can be found easily enough on the Logitech website. Once installed the software is straightforward to use and we experienced no issues with it’s use. Here you can configure the customisable keys, alter the backlighting colours and change what information the LCD screen displays. It works and it doesn’t confuse you, what more could you want?

Overall the Logitech’s G510s is a decent gaming keyboard which embodies a very substance over style approach. It’s not beautiful by any stretch of the imagination, but it does its job and it does it well. Or as a great man once said, “she may not look like much but she’s got it where it counts, kid.”