The Benq GW2780 is a 27-inch FHD LED monitor (1920 x 1080 resolution) that has been designed to look minimal and “stylish” according to their website. Not being a monitor aimed directly at gamers, it focuses on the use case for being slim and also tidy with a hidden cable management system.

It boasts its Low Blue Light and Flicker-Free technology which is known to cause eye strain and increase problems with sleep as it stimulates the natural daylight for the brain. Being the main sell for the monitor the initial impression is this monitor is aimed more at the casual computer users rather than a gamer. The panel being an IPS looks to have better colour performance than it does speed, this is noticeable in the specs which tells a 5ms response time and 60Hz refresh rate.

Not being a gaming specific monitor, the design is a lot more traditional for the GW2780 design with the all black matte bezel and stand. Benq has been able to reduce the bezel quite a significant amount compared to other monitors but being the selling point it’s quite important. Plus, it does just look really nice being so much screen and less plastic around the edges. The stand resembles the others that Benq produces similar to their gaming range with a flat rectangular design made from plastic.

It is a little shallower than I’d have liked, it stands up alright but moving the monitor it did like to tilt a little bit causing it to feel a bit unbalanced. It should not cause too many issues as monitors don’t move around that much but stability wise it could be better when compared to other monitors I’ve tried. It would also help when tilting the display between the -5 and 20 degrees of tilt forward and backwards as it makes you want to hold the base while adjusting it.

Realistically though, this monitor is quite well suited to be mounted on a multi-monitor arm with the 100×100 VESA mount on the back. As the bezel is so slim, a lot of PC users will like being able to put multiples together with very little between each screen. Gamers are aware of multi-monitor setups but even casual users are becoming more dependant on dual monitors and the GW2780 slim frame is great for this. 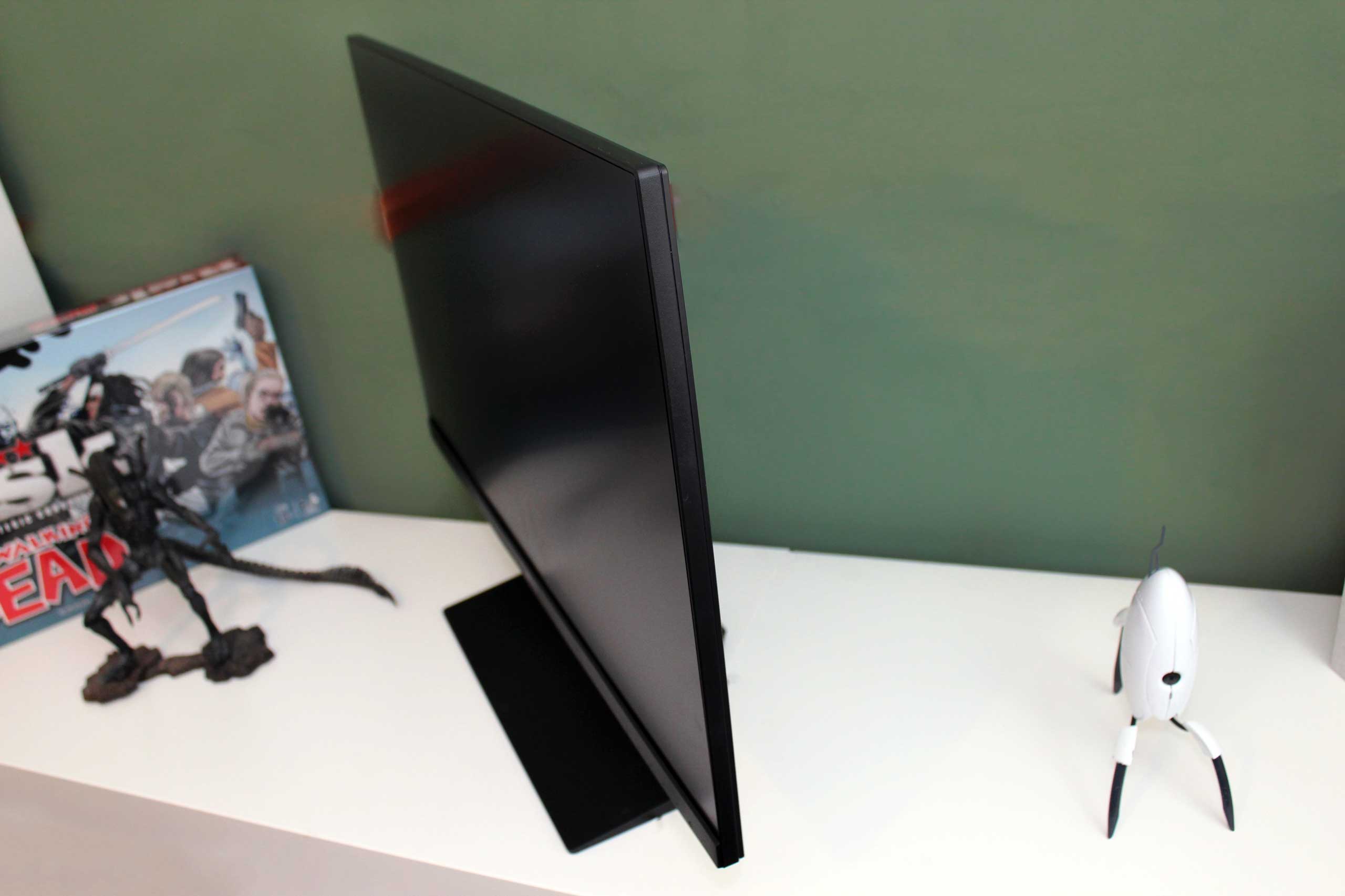 There’s a standard number of ports on the monitor; 1 HDMI, 1 Displayport, 1 VGA port which is probably enough for the standard user. Inside the frame, you’ll also find a couple small 2w speakers. Speakers that small work but don’t expect them to be anything mind-blowing, they sound a little tinny at higher levels and don’t really have any bass at all. Let’s be honest though, who really ever uses monitor speakers? They are a nice to have but not a necessity to your viewing experience.

Brightness on the monitor is stated at 250 cd/m2 but through testing we found it to be a bit lower at around 220 cd/m2 out of the box. You can tweak the settings and up the brightness but it causes some of the colour performance to degrade a little bit. Overall colour performance is alright thanks to the IPS panel but it can be a bit washed out when the brightness is turned up.

Although not a gaming monitor, we tried Overwatch, Fallout 4 and Battlefield 1 to see how it faired. For being a “low” refresh rate when compared to gaming version, it was not as bad as I assumed it would be. Don’t get me wrong, I could tell that the refresh rate was lower seeing tearing but as a casual gamer who has never been above 60Hz this will be the norm for them. It’s just worth mentioning that if you are looking for a gaming monitor, this is not the one to choose.

At the time of writing Amazon is selling the monitor for £162 which for a thin bezel, everyday use monitor is okay for 27 inches with fairly decent colours. Compare it to ViewSonic VX2757-MHD 27-inch however which has a 1ms response time, same size monitor for only £156 it’s not hard to realise that for the price it starts to fall short in terms of performance for gaming.

Ultimately it’s a choice based on what you’d use it for most. If you are a home and office user as BenQ have marketed on their website the GW2780 will be a decent monitor for your day to day use and it’s really slim making it great for a two monitor set up. The IPS panel give you a decent colour performance although a little dimmer than the stated specs but for movies watchers will be fine. If you are a gamer and will be playing more than anything else, then give this a miss and look for a gaming specific monitor.

The GW2780 gives you 27 inches for a fair price if you are a home or office user plus good visuals for the cost. If you are a gamer, however, it's not the quickest monitor for the price point so I'd give it a miss.