When Yooka-Laylee first appeared on Kickstarter, I leapt at the occasion to give this new project some of my hard-earned money in order for these Rare veterans and composers a chance to make a game I have been pining for since the 2000 release of Banjo-Tooie on the Nintendo 64.

One of the Kickstarter awards allowed me to access something Playtonic games has called “The Toybox” which was described “a self-contained, spoiler-free sandbox designed to give Yooka-Laylee backers a taste of the platforming mechanics set to appear in the final game”. Well, I paid for that and nearly one year later; I finally managed to sink my teeth into the Yooka-Laylee Toybox.

The first thing I noticed when I started up this specialised demo was just how much it oozed nostalgia towards past Rare projects, especially the Banjo-Kazooie series. Everything about the demo felt like the platformer titles of old. The title was adorable, the controls were precise and platforming sections didn’t feel sloppily done. Pinning any failure felt like it was the fault of the player rather than that of the game.

The Toybox isn’t exactly filled with content. It allows you to run around a world made of basic geometric shapes and collect a variety of items and take in the world that Playtonic are trying to introduce to us. This is a great way of trying out the base mechanics but without giving anything away from the final product, and that works perfectly fine for me.

Most of the content comes from exploring the gameplay mechanics of Yooka-Laylee as playable characters. The basics are similar to Banjo-Kazooie. Yooka can run, jump and attack whilst Laylee the bat sits on his back, her main purpose at this point is to pick up Yooka to help him glide across lengthy gaps.

A vast world of geometric shapes, perfect for all of your platforming needs

They do have an extended set of moves to help with tougher platforming sections. One of the abilities is for Yooka to roll up into a ball, whilst Laylee stands on the ball and rolls her friend across the terrain in order to reach places at faster velocity, or to get the characters up steep inclines spread throughout the world. Lastly, is the ability to perform a high jump to get to those hard to reach places, Yooka propels himself upwards by bouncing on his tail. These are all move sets that we are accustomed to from the Banjo-Kazooie titles, but we can ignore all that because it’s Yooka-Laylee and honestly, exactly what fans of that genre want.

We are also introduced to one of Yooka-Laylee’s characters (aside from the titular heroes of course); a security bot, who has to put his desires to kill all organic life in order to introduce you to the Toybox. The security bot also introduces the dry, British humour that we have grown accustomed to from classic Rare titles. There are numerous references and meta-jokes towards the game, the early access product as well as humorous digs towards the developers of Playtonic Games themselves. 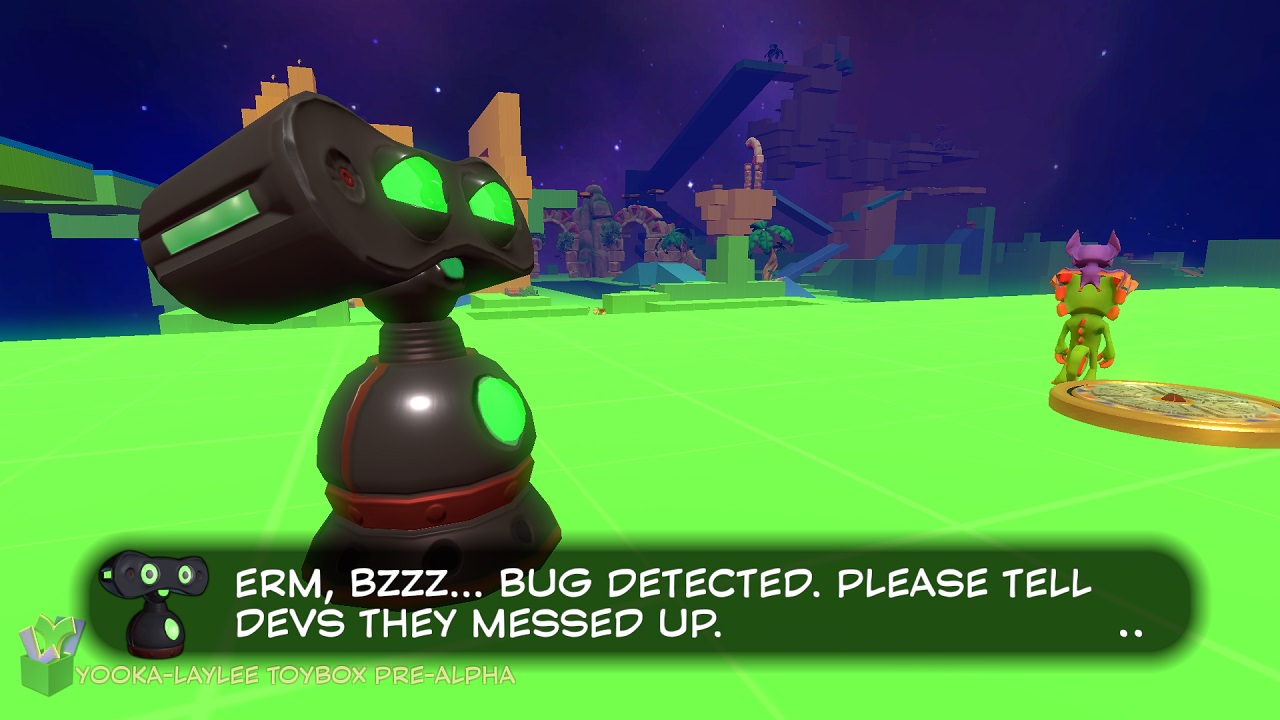 Sadly the Toybox was very short. Within 30 minutes of starting the demo, I had finished it, picked up every collectible and plundered the map of all it could offer. However, I did come back to it, just as a reminder to myself as to what was coming my way. Yooka-Laylee is not just a nostalgia-filled romp for those who yearn for old-school platforming titles. It shows that it has the potential to be a fantastic title all-round if the basic Toybox was anything to go by. We will know for sure when the title is released in Q1 2017.

If you are looking for a new adventure game to play, then check out our Top 5 Adventure Games to come out this year article to keep you going.