So now we jump from 45 cards revealed to all of the 135 new Hearthstone cards shown. As you may have expected, we won’t be exploring EVERY new card in this part; here we are going be starting with the less important neutral cards and then moving on to detailing the most interesting and awesome neutral cards in Journey to Un’Goro. As always, make sure you are up to date on how we rank the new cards as you may not understand why they have the ratings they have been given. Without further ado:

Hemet, Jungle Hunter: 2 Star (Combo with the Hunter Quest?! I kid, but even so it’s hard to see how this card will fit in to decks, even in control games)
The Voraxx: 2 Star (Weak considering its Legendary status. Low impact on the board and seems to only be usable in Paladin which most likely wouldn’t want to use it anyway)
Charged Devilsaur: 2 Star (Much more impactful minions should be played on turn 8 and beyond. This card is only slightly good in a control meta, everywhere else it is not useable)
Primordial Drake: 3 Star (The only new Dragon in the whole set is not that bad; high health with taunt and a nice board clear effect means it should see some play but relies on how strong Dragon decks are after rotation)
Tortollan Primalist: 1 Star (Don’t ever play this card. EVER.)
Bright-Eyed Scout: 2 Star (At least whatever you draw you can play on curve? Relies too much on luck to be consistently good)
Emerald Hive Queen: 2 Star (Comparable to Zombie Chow but with a MUCH higher downside. So high in fact that it should not see much, if any play. The Beast tag and fringe uses save it from being rubbish)
Frozen Crusher: 1 Star (Oh look, Blizzard are buffing Purify Priest!)
Servant of Kalimos: 3 Star (Discovering an Elemental is strong but the stats are just a bit below average; will see play in dedicated Elemental decks)
Stonehill Defender: 3 Star (This card is made better thanks to its discover effect but its stats are still a bit too low for my liking)
Devilsaur Egg: 3 Star (Has good combo potential but has just a bit too much health in order to be abused)
Vicious Fledgling: 2 Star (The dream is you get an attack off, Adapt Windfury, attack again and get another buff. Outside of that? Not great)
Humongous Razorleaf: 2 Star (Oh look, Blizzard are buffing Purify Priest!)
Ultrasaur: 2 Star (Generic OK stats filler card)
Giant Mastodon: 2 Star (Generic OK stats filler card)
Sated Threshadon: 2 Star (What is this card? Extremely over costed for a weak Deathrattle at 7 mana)
Stormwatcher: 1 Star (Weak, low impact and has too high of a cost)
Sabretooth Stalker: 2 Star (I can’t find a reason to play this card over Stranglethorn Tiger…can you?)
Nesting Roc: 2 Star (A 4/7 Taunt isn’t that bad for 5 mana but it’s a win-more card which will be one of the first cards to be cut from a deck that you could run it in)
Stegodon: 2 Star (Generic OK stats filler card)
Igneous Elemental: 3 Star (Not a bad card but it is easily replaceable in the Elemental deck)
Pterrordax Hatchling: 2 Star (Weak card; bad on curve and too high mana cost)
Eggnapper: 2 Star (TMNT in the house! Barely an OK card with a sort of good upside? Replaceable in most decks you would want to put it in)
Thunder Lizard: 2 Star (I honestly could not think of a deck that you could put this is where it would excel as it has little synergy with the Elemental deck)
Volatile Elemental: 3 Star (One of the few cards that depending on the changing meta may be a great card. Watch out for this card; if played on curve it can be crippling)
Ravasaur Runt: 2 Star (Just like Nesting Roc, this is like a win more card but with less stats, less impact and harder to play on curve. Better cards exist for 2 drop slot)
Emerald Reaver: 3 Star (An aggressive card which may see play if the meta changes in specific ways but it is unlikely)

This card is why Sylvanas was moved to the Hall of Fame and to Wild format. It is hard to state just how good Spiritsinger Umbra is going to be but a good indication is how much players will want to kill this card. Honestly, the advantage you can gain by playing this card and getting one or two Deathrattles off is amazing, so leaving it around is something your opponent will not want to do. Its stats are even decent; as a 4 mana 3/4 it can hold its own for a while on curve and is low enough in cost to be played as a combo piece as well. Just a solid legendary but isn’t rated higher because it really is a combo card and not every deck can accommodate that.

This card is what makes me feel like Elementals are going to be a strong deck. Blazecaller is a 7 mana 6/6 Elemental minion which when played deals 5 damage to anything if you played an Elemental last turn. This card is comparable to Fire Elemental and played on curve next to this card seems like a really strong set of turns. There is little really to talk about here, this is just a great card but will only see use in Elemental decks. That being said, I’m sure it will be in all of them, so beware your opponents turn 7… 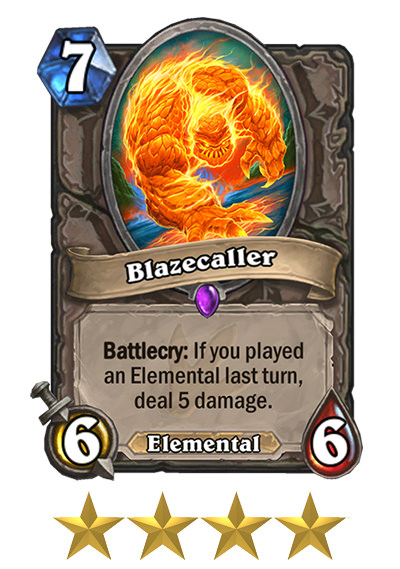 Bittertide Hydra is the new Fel Reaver, a 5 mana 8/8 Beast which has the effect of whenever it takes damage, you take 3 damage. This sounds like a massive downside but honestly, it isn’t. If played correctly and at the right time, like Fel Reaver was, the downside is all but mitigated. An 8/8 on turn 4-5 is potentially game winning and at least will bait out hard removal or remove a fair few minions. The damage, if managed, will be worth it. Being a Beast even helps with some special cards that can help it get much better (Houndmaster for example). That damage effect can be exploited however hence why this card will be used when it can be, but careful consideration is needed when you play it.

Fire Plume Phoenix is a 4 mana 3/3 Elemental that deals 2 damage when played. Let me paint you a picture; you play two of these, two Fire Elementals, two Blazecallers and send all of their damage to face, that’s 20 damage in total AND you get to play good minions on the board alongside this. That is mental. Even if you send this damage to your opponents minions; that is some serious control power you are laying down. It’s cards like this that are going to push the Elemental decks into the limelight and could usher in a control meta to Hearthstone. 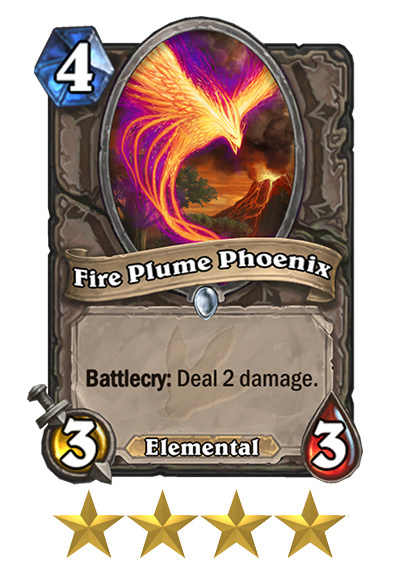 At first glance, you would be forgiven into thinking that Stubborn Gastropod is on the weak side. Being a 2 mana 1/2 Beast is not the best, even with Taunt, but in combination with Poisonous this deadly snail becomes a force to reckon with. Since Poisonous kills any minion this card damages, you will be getting a confirmed kill on anything thanks to the Taunt. This is fantastic in a control or aggressive meta and to top it off, it’s even a Beast which gives it some synergy. This cards only real downside is that its stats are a bit low and it should only see play in decks that like this type of card, a cheap form of removal which hassles your opponent (It’s worth noting that this card barely got a 4 star ranking and this was thanks to the Poisonous keyword which I believe is going to very strong in this meta)

Along the same lines of the Stubborn Gastropod, Giant Wasp is a 3 mana 2/2 Beast which has Stealth and Poisonous. This is comparable to Patient Assassin but the Wasp wins out here; with double the stats and a Beast tag, this card is much more playable and, thanks to the amount of good quality minions coming in this new set, having the combo of Stealth and Poisonous is just too dangerous to ignore. If the Gastropod had any problems, the Wasp fixes them and as such will see play in any deck that can fit it. That being said, if the meta shifts to a heavy control meta this card may be edged out for other picks that are more efficient in how they remove cards. 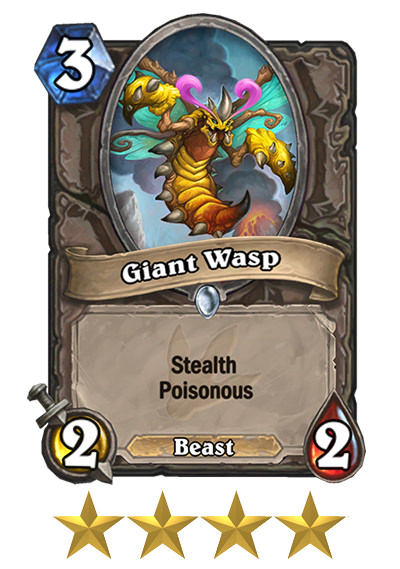 Hey! A Murloc that’s actually what the tribe needed! Rockpool Hunter is a 2 mana 2/3 Murloc which when played increases another Murloc by +1/+1. This is directly comparable to Shattered Sun Cleric which has the same effect but costs 3 mana and can buff any minion, not just Murlocs. The difference here is just how needed this card is; Murloc decks have been missing a stable 2 drop for a long time (RIP Puddlestomper) and to finally get one with a fantastic upside is a dream come true. But why is this card rated as a 5 star? The Shaman Quest spell. In order to use that quest, the Murloc deck needed efficient cards to be played on curve in order to complete the quest requirements as quickly as possible, Rockpool allows this and even has stats which allow it to stick around a lot longer than his other fishy brethren. It’s even solid in the late game, making some weaker Murlocs survive a tiny bit longer or even pushing just that little bit more damage through. A fantastic balanced card which will 100% see play in every Murloc deck and potentially even more deck types.

It’s impressive that, considering the number of cards reviewed, few are unplayable or badly designed. Neutral cards also tend to suffer as being the leftovers from designs that could have been class cards, thankfully, that doesn’t seem to be the case here. Speaking of the class cards, you can check out the breakdown of the final ones revealed soon so check back when you can. For now, what neutral cards have caught your eye? Have I made a mistake? Let us know what you think of Journey to Un’Goro’s neutral game.