It’s only been a few days since we caught up with all the revealed cards for the new Hearthstone expansion, Journey to Un’Goro, but Blizzard have dropped ANOTHER bunch on cards on us and show little signs of stopping. Thanks for making my job even harder guys! Just like before, make sure you are up to speed with how we evaluate these new cards and remember, we’re going over the more important ones for now. Right then, starting with the cards that didn’t quite make the cut:

Living Mana: 2 Star (A unique effect, cool artwork and it’s great to see something like this being added into Hearthstone, but as of right now? It’s hard to see this being used seriously…)
Mana Bind: 3 Star (This is a great secret but unfortunately, the coin exists and that scares me with this card. Will see play even more if the Mage secret deck becomes stronger)
Lost in the Jungle: 3 Star (This card makes me nervous; 1 mana for two Paladin hero powers? It’s an oddly specific effect and could point to more Sliver Hand Recruit support in this set which may boost this card in rank)
Curious Glimmerroot: 2 Star (As funny as this effect is, it’s still just an OK card which may draw you a card)
Mirage Caller: 3 Star (Low stats but a good effect. Not as good in the early game and debatably not as impactful in the late game)
Gluttonous Ooze: 3 Star (Another counter to weapons but will still be just a tech card alternative to the original Ooze)
Volcanosaur: 3 Star (Double Adapt is nice but the random side to this card ruins any specific ways in which it could be used. Beast tag is nice as well. Worth noting that everyone you can get this card in golden if you log into Hearthstone everyday from March 28th onward. Value!)

Jumping in with an actual good Rogue card, Vilespine Slayer. This minion is a 5 mana 3/4 which, after a Combo, can outright destroy a minion. This is a simple effect but a deadly one; powerful spot removal is always good and this card epitomises that. It’s hard to say how impactful this slayer will be but the further we head towards a control meta, the better this card will get. However, in an aggressive meta this card is just a little bit too slow.

Speaking of a control meta, Corrupting Mist is the perfect card to fit right into that world. Corruption to all minions is a powerful effect for a 2 mana Warlock spell and is extremely hard to get rid of, so you are getting confirmed kills on all minions that are corrupted. This makes it comparable to Doomsayer, a card famously used as an anti aggro card, albeit class specific. These two cards together in a deck could lead the way for an ultra-defensive Warlock deck to come into existence and, if we get more cards like Reno Jackson, be a godsend for decks that run 1 of each card. As before though, an aggressive meta will make this card a fair bit worse. 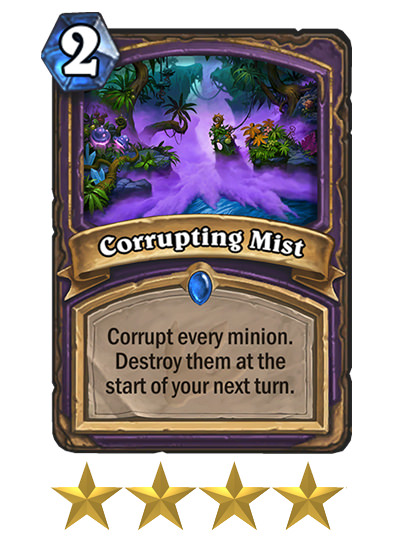 Molten Blade is a hard card to evaluate; a 1 mana 1/1 Warrior weapon would be terrible but since it can change itself into a random weapon every turn could make it equal parts amazing and rubbish. It all depends on the weapons that are currently in rotation and, thankfully, there are some good weapons that are available. The biggest issue here is the inconsistency in weapon costs, this card is going to be so good in control games and potentially great in the early game but, as with any random effects, can become a dead or useless card.

Glacial Shard is another hard card to discuss. As a 1 mana 2/1 it has aggressive stats but its effect, freezing an enemy, is quite defensive. This makes the card rather diverse and useful in various situations across the entire game and that’s without considering any potential combos (Shatter hype?). That being said, it being a 2/1 makes it vulnerable to everything damaging so its presence on the board will be short lived. Even so, a strong card and will see some play in a few decks. 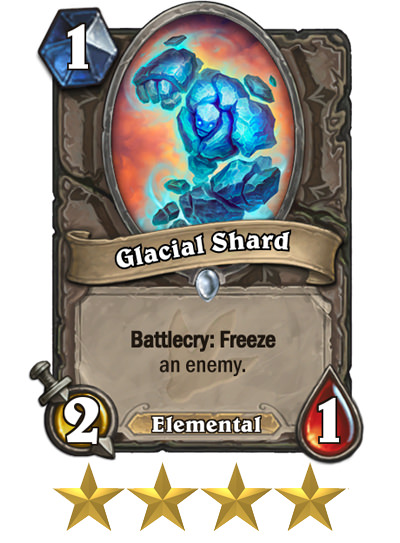 New quest cards are always exciting and the legendary Hunter quest spell is just that. In order to complete this quest you have to play seven 1 mana minions; this is just like the Shaman quest except the minions have to be played from the hand, rather than summoned, which makes it a little harder to complete. In that case, the reward should be awesome right? Well, you will be getting a Queen Carnassa, a 5 mana 8/8 Beast (again, just like the Shaman quest) which shuffles 15 Raptors into you deck. Those Raptors? 1 mana 3/2 Beast’s which when played draw you a card. Clever girls… The filtering and synergy here is crazy so, why is this card rated as a 3 star? Simply put, this deck you need to make to accommodate this quest card, filled with 1 mana minions, is hard to make and even harder to make consistent. Even after considering how good the 15 Raptors are, they just don’t seem worth stacking your already clunky deck with. We shall see when the card is released, but as of right now? I have my doubts…

Something I don’t doubt however is how good the new Hunter minion Crackling Razormaw is. It’s a 2 mana 3/2 Beast which when played lets you Adapt a friendly Beast. This card is just good in any situation; played on curve, this can net you a large advantage super early in the game if your 1 drop survives. But even during the later stages of a match, using this effect on a Beast with an impact, like Savannah Highmane, could be game winning at best or completely swing the game in your favour at worst. It’s even got some great aggressive stats allowing it to trade above its weight. All in all a great card that should see play in every Hunter deck that can fit it into. 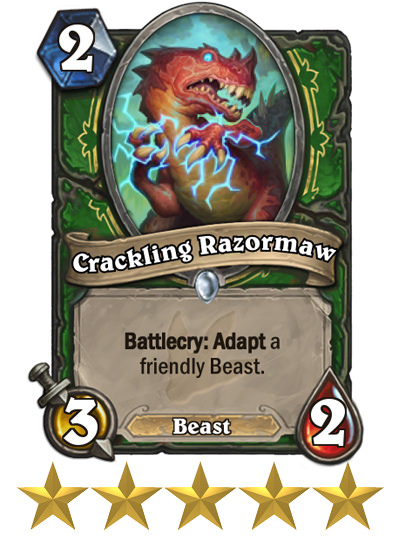 We are now sitting at 45 cards revealed out of 135 (as of 26/03/2017) and with Blizzard hinting that they are going to be releasing the whole set sometime soon, you can expect another breakdown of the new cards coming very soon. Make sure to check out the other cards that have been shown off and let us know if you agree with the rating they have been given. Also, drop us some theory-crafted decklists; it would be interesting to see what you all could come up with using these new cards.