There have been many games that have come out in 2016 and we have had a look at most of what was on offer. Some games have been fantastic, while others have been average but luckily none has been dreadful enough to fall below our scoring of a 5.

It is this time of the year we look back as a team, have some heated debates and write up the one game of the year which we thought really did it for us and why. So without further ramblings, here are the staff of VGU’s games of the year for 2016.

After being introduced to the Final Fantasy games via the legendary Final Fantasy VII, I have experienced a love hate relationship with Square Enix’s flagship products, especially when it came to the critically divided XIII trilogy. I had similar doubts on whether Final Fantasy XV would be a similar situation, but after watching one particular trailer, my doubts were all but silenced and I placed my pre-order within the next few days.

Seven years after the last traditional Final Fantasy game, Square Enix have presented us with the fifteenth entry in the mainline series, and it has definitely been worth the wait. Its mixture of real time action based combat, along with a deep immersive narrative and some of the strongest main characters seen in the franchise thus far.

Top it all off with a fantastic soundtrack from Kingdom Hearts composer Yoko Shimomura, and a sensational cover of Stand by Me by Florence and the Machine, you have a well rounded package that will be remembered as one of Square Enix’s most entertaining video games to date. What makes things even more exciting is that new single player scenarios starring a selection of the main characters are on the way, as well as the recent update which includes a New Game Plus mode for additional playthroughs.

One of the best aspects of the game is the focus on the emotional impact that the outbreak of war has on the young prince and his entourage, as well as the ability to view the vast open world from the inside of a vehicle instead of being solely on foot. Read our full review of Final Fantasy XV for more.

Overwatch is almost the perfect video game. Fantastic characterisation, simple and fun gameplay, with game modes that are similar yet full of variety. Blizzard already showed us they know how to make MMOs, RTSs and MoBas, and this year they proved they know how to do FPS too.

The fact that Blizzard also support the game for free adding content every few months is such a refreshing rarity in this age of gaming. New characters, maps, game modes and skins are released on a regular basis and you don’t have to spend a penny of any of it, even skins if you don’t have that kind of disposable income. The game caters for every kind of gamer from the casual FPS noob to the most hardcore wannabe MLG try hard.

What started as a nice past time and casual game quickly became a competitive and intense FPS game. Already having an established eSports presents less than 12 months into your game’s lifespan is almost unheard of for a brand new IP but the instantly enjoyable gameplay mixed with the ease of access to newer players makes Overwatch not only my game of the year, but possible of the decade.

Finally, the fact that the poster character of the franchise, Tracer, has recently been confirmed as being gay is a huge boost to not only Blizzard’s LGBT+ crowd, but gives young gay gamers an idol to look up to which has been missing within the industry for quite some time.

I don’t wanna say everything Blizzard touches turns to gold but….you can also read our entire Overwatch review and see.

It’s no surprise to anyone that I bloody loved Uncharted 4: A Thief’s End, heck it’s one of the only reasons that a PC gamer like myself even bought the Playstation 4. I don’t regret the decision for this game alone.

I mean I’m not joking when I would almost consider this the perfect game for the PlayStation 4 as well as the best game of 2016. The story finishes the Nathan Drake’s part in the Uncharted story brilliantly as well as making a thrilling, action-packed adventure to play for newcomers to the series (though if you haven’t played Uncharted before, I recommend you play them all. Thank me later.). A Thief’s End is also graphically stunning and is right now the best looking title on the system, seeing the jungles of Madagascar in their vibrant colours is incredibly satisfying and feels like the biggest leap into the next generation of gaming. Hell, they even managed to make Scotland look pretty in Uncharted 4.

The game still doesn’t stop giving, Naughty Dog has recently released a co-op survival mode as well as announced a new single-player DLC coming in 2017. So here’s to more from this wonderful title next year and while you wait, read our full Uncharted 4 review.

Most first person shooters suffer from a lack of individuality and creativity. Each of the recent Call of Duty instalments has been barely distinguishable from the last, while it’s only recently EA have tried something new with the World War I setting in Battlefield 1. The third, and comparably small triple A first person shooter for 2016 was also released by EA, but received such little attention compared to Battlefield 1 due to the lack of marketing that everyone was pleasantly surprised when most outlets reviewed it much more favourably than either of its competitors.

Featuring a story up there with the true greats, the absolutely exceptional mission Shock and Awe and a lovable titan companion called BT, the short but sweet single player campaign makes the purchase worth it alone. The multiplayer is fast, frantic fun with a variety of game modes and six different titan loadouts to suit different play styles. It’s easily the best shooter of 2016 and you can read our Titanfall 2 review to find out what we thought in detail.

This latest game in the battlefield series has captured the hearts of many avid gamers and first person shooter (FPS) players. The single-player has been outstanding, in comparison to older battlefield generations and the multiplayer has outdone itself yet again.

The single player campaign is a collection of war stories spread across the different locations of WW1. This gives the player a different character perspective each with a different theme and goal. The game begins by throwing you straight into the deep end with the message popping up ‘you are not expected to survive’. As you play and try to fight the German forces back you will die… and every time you respawn it tells you the name of a soldier and their age. Being 18 it really hit me hard when an 18-year-old soldier was my next character and I didn’t last 2 minutes. This really hits home the awfulness of conflict and sets the scene of the war stories that follow within the single player campaign.

In my opinion Battlefield 1’s multiplayer is the best yet. I love the fact I’m not double jumping, running on walls and flying around the map. Instead, I’m playing a WW1 style FPS in which every action has a reaction and consequence or a reward.

However, within the multiplayer, there is a feeling that anything can happen. Every game is different, from the amount of customisation in your loadout, to the style you play each game. You have multiple options on how you can attack an objective. You can provide covering support with a sniper, or get behind the back lines and pick off people heads. You can rush in with the assault class and push through with brute force. Then you can provide your teammates with support by healing them and giving them ammunition. Whichever your playstyle preference, there is a way for you to play Battlefield 1. There are also many other aspects in Battlefield 1, from the huge array of vehicles that you can drive/fly to the weather system that is put into the different maps. Each game is a violent cocktail that is always going to be unique.

Overall Battlefield 1 is a fantastic game. It replicates two armies battling for victory and gives you the hunger to perform well for your squad every time you spawn in. If you want all out-FPS warfare on a gigantic scale this is the game you want to play. Read our full review of Battlefield 1 for more.

It came, it saw, it kicked our collective arses. Taking all the best ideas of previous titles, alongside a few cues from Bloodborne, Dark Souls III came out firing on all cylinders.

All the key ingredients are here from the near impenetrable storyline to the beautifully morbid fantasy landscape. Not to mention some of the most insane and creative boss fights that the series has to offer.

Whilst perhaps not as groundbreaking or memorable as previous entries in the series, Dark Souls III is game I’ve poured the most hours into this year and I don’t see myself stopping anytime soon. Grim, punishing and utterly engrossing; Dark Souls III is pick for game of the year. If you want to find out more, read our Dark Souls III review. 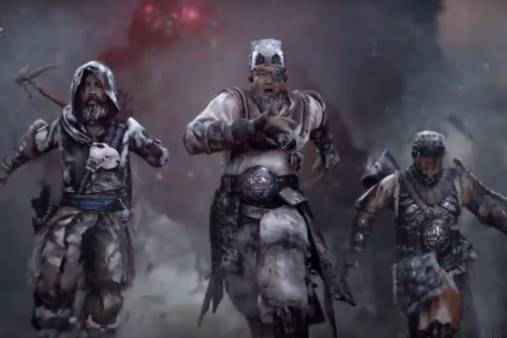 Titanfall 2 is getting a new titan and map next week