Deciding the winner of Best Indie was a tough one, seeing as there has been a fair number of great indies released this year. There’s been the beautiful Ori and the Blind Forest, the addicting Rocket League and the engaging Her Story, to name but a few of the many independent titles vying for your attention this year. With all this competition and argument among writers, the award finally settled on a small little RPG about dating skeletons, being determined and occasionally having a flexing competition with a buff seahorse. The winner is Undertale.

Undertale was one that personally flew under the radar for me for the majority of this year, with my attention being held by indies like Rocket League but as soon as I discovered its existence, it’s a game that I simply could not escape. Every Youtube comments section I seemed to end up at was raving about Undertale, friends kept praising the joys of Undertale and various editorials gushed at how revolutionary Undertale is for changing up the way a RPG configures its battle system. Finally caving and buying said game, I was pleasantly surprised that it lived up to much of the hype that it had been given. 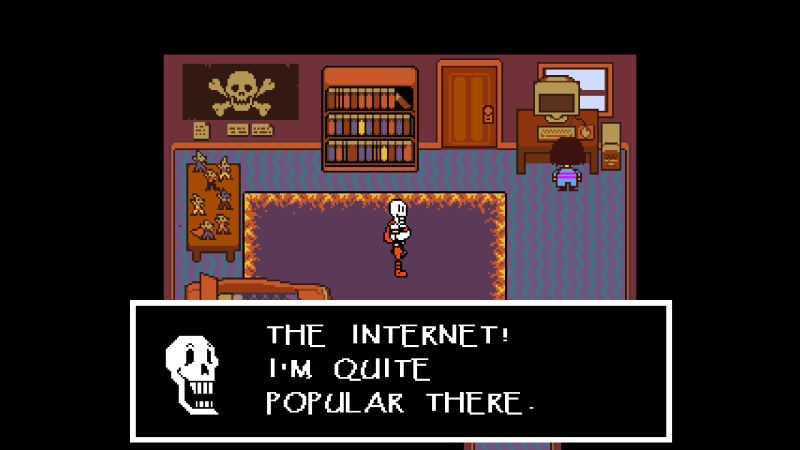 Yes you are Papyrus. If Tumblr is anything to go by, you’re a little too popular.

The battle system, if a bit obtuse and hard to understand for newcomers to RPGs, was a unique twist on the way RPG battles usually go, with players dodging attacks like they are in a bullet hell game, while having the opportunity to reason with monsters rather than simply murder then. The soundtrack is the best I’ve heard this year, the main characters are all very memorable and do actually inspire laughter and while the three completion paths are as arbitrary as any other RPG, it does raise some interesting quandaries about heroes in role playing games and what the effect of mechanics like saving and restarting would have on a world.

For me, Undertale represents why I enjoy playing indie games, it gives a space where designers can have a punt on a new idea or play around with mechanics to see what they can come up with. While games like Rocket League certainly kept me hooked to start off with, none of them have stayed with me as much as Undertale has. So, for those reasons, I believe Undertale deserves the Best Indie award.

I will give one caveat, the Undertale fandom is one of the most annoying fandoms, being up there with FNaF and people who ran ‘the cake is a lie’ into the dust. If you are going to play Undertale, go in blind and stay away from rabid fans. They will make you hate this lovely little game.