I swore that I wouldn’t get suckered into the hype this time. After being burnt by Dark Souls II, I was going to remain as uninterested in Dark Souls III as humanly possible and go into it with no excitement for the final instalment in the trilogy. This plan failed when I saw the recent preview footage and lore speculations and I’ve been dragged right back into the hype cycle yet again, an overexcited fanboy who’s already deciding what character build and weapons he will use once he pops the Dark Souls III disc in.

I didn’t understand the Dark Souls hype at first, being one of those people who bought it on a whim after hearing reviewers singing the praises of Demon Souls and thinking it might be a good game to fill the time until the true lord of RPGs, Skyrim, released in November. I got up to the Bell Gargoyles, eventually beat them after realising how to summon people in and then quite promptly put the game on my shelf and didn’t touch it for another few months. There was no moment of the clouds parting and the god Miyazaki shining down upon me with his brilliance, Dark Souls was just a really hard RPG which had a menu system designed by a blind person and a drunken camera with a tendency to panic and hide in the corner whenever you were fighting enemies in a corridor. I was only hit by the Souls virus once some of my Xbox Live friends refused to stop talking about it whenever I jumped in a party.

Tales of beating the Capra Demon with only a smidgen of health left, the glorious city of Anor Londo and the intricacies of the combat system would echo round the party chat. This seems to be the first step for anyone who on their path to becoming a dyed in the wool Souls fan; they get cornered and entranced by some Souls evangelist online or in person and you’re enamoured by their enthusiasm. So, I gave the game another go and with the guidance from my personal Warriors of Sunlight, I completed my first run of Dark Souls after about 40 hours. I still remained confused by the whole experience, unimpressed by the dodgy framerate of Blighttown and the story which didn’t seem to make any bloody sense, despite being told ‘you just have to figure it out’ by the brothers of the Church of From Software. I started another character and began to play with all the knowledge I had acquired from my previous journey and I beat it in 20 hours this time. Then I beat it again in 15. The Artorias of the Abyss DLC launched so I had to start a new character and spend 10 hours collecting everything in the DLC. I soon was drafting PvP builds, using the Bottomless Box glitch to create specific characters and watching lore videos to piece together my own interpretation of the fall of Anor Londo. It was only when a friend of mine told me that he’d finally give the game a go as long as I stopped nagging him did I realise that I’d become that kind of Dark Souls fan. 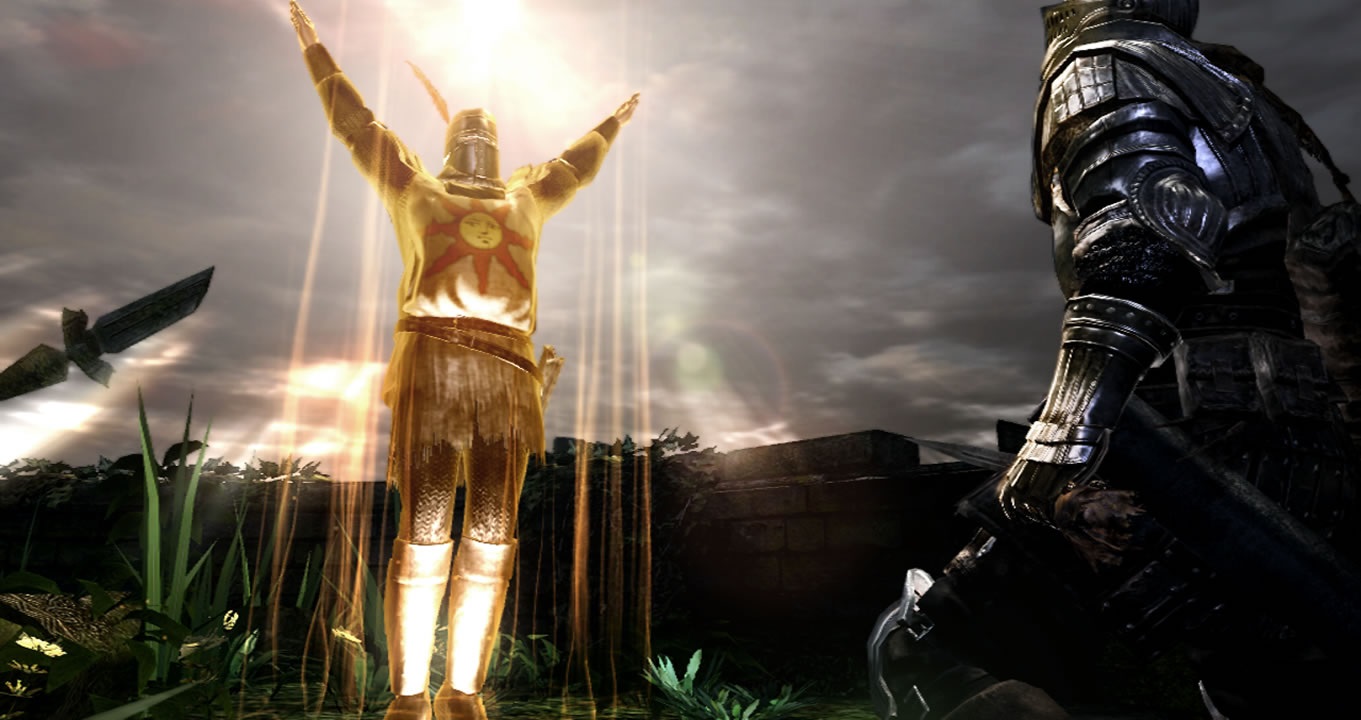 I’m ashamed to say I may have praised the Sun in public at least once.

I’d become the video game equivalent of the gap year bore at a party, extolling the virtues of Miyazaki’s brilliance and how ‘you simply can’t play other RPGs after you’ve beat Dark Souls’. I was well aware that I sounded like a raving cultist, preaching about some crazy religion where everyone meets up in full plate armour and practises their dodge rolls. Similar to the most devoted of fanatics, we believe that we know the way forward. Shun the false idols of Bethesda or CD Projekt RED and join us in the sun, complete with our incredibly tasteful Estus Flask t-shirts and obsession with ‘gitting gud’. When the news broke of a sequel to the piece of art which released us chosen ones from the shackles of mediocrity, you’d think it was the second coming of Christ. Forums and subreddits would pour over every last detail and any news that came out of press events sent me into a frenzy of trying to piece this ultimate game in my head. I even got a chance to go to a Dark Souls II preview event, playing through the first few hours of the game and thinking of it as an almost holy experience. I was fully prepared to get the full game, lock myself in my room and emerge as a Hollow once I had completed the main quest 17 times. However, the opposite happened. The world was nowhere near as connected and well designed as Dark Souls, bosses were underwhelming and the whole game just felt like a poor imitation of the original. Upon beating the final boss, which was nowhere near as nerve wracking as the ultimate duel against Gwyn, I felt fractured as a Souls fan. The cracks in the armour began to show, common complaints about the rubbish camera, crappy level/boss design and lack of polish began to trump my usual defence of ‘oh, you just don’t get it.’

The cycle seemed to be broken. Much like the Chosen Undead embracing the Dark and turning their back on the Age of Fire, my trust in Miyazaki was shaken. Dark Souls II sat on the shelf, this time as a spectre of disappointment rather than a difficult adversary that needed to be overcome. However, a similarly depressing game came to help in this time of need, a gothic twist on the Souls series which promised to me that the people at From Software still had that magic touch. Yes, it seemed more formulaic and pandered to specific things that Souls fans enjoyed but Bloodborne was just the palette cleanser I need to be prepared for Dark Souls III. So now, I am slipping back into the cycle. I’m searching through scans from Japanese magazines, I’m watching gameplay videos frame by frame for anything interesting and getting way too excited over finding out the names of areas and NPCs that are in the land of Lothric. Yet for all my excitement, there is a slight melancholy to the arrival of Dark Souls III. According to Miyazaki himself, this is the last in the Dark Souls trilogy and he cannot go on making the same games again and again. This cycle has to end and while this final instalment may have fanservice galore and a return to a style of gameplay that is more like the original game I fell in love with, this story has to end. There will of course, be pretenders to the throne with the rise of indie ‘Soulslike’ games and you can bet any money that at E3 this year, a big Western studio will bring out their version of a Souls clone but they will never surpass the game that started it all.

My own Dark Souls fan cycle may be coming to an end but I do hope that the series ends with one last hurrah, as the Fire is linked for a final time and all of the souls we’ve come to know are put to rest. From Software will still be making games and the legacy of the Soulslike should continue. I just hope we get less Lords of the Fallen, and more Bloodbornes in the future. Or, Dark Souls III could be awful and then I’ll realise just how much of a raving zealot I was for lauding a series which conditions players to become masochists. The cycle will come to its end in April either way.

Will’s 2016 Games of the Year
Powered by Magic