The Star Wars: Battlefront beta just ended and we’ve been hammering away at it to see what DICE’s rendition of this classic series has to offer. Rather than just hearing the thoughts of one of our writers though, you lucky people get to hear the impressions from both Sam Foxall and Ian Stokes, Star Wars nerds of the highest calibre.

Sam: Many Bothans died to give us this Battlefront beta. Shame it’s more like something from the prequel trilogy, rather than the superior original three Star Wars instalments. I wouldn’t say it is as bad as The Phantom Menace, it’s probably holding somewhere around Attack of the Clones in its current state. So, what’s does the Beta do right? The sound design is perfect; you are in a Star Wars film while playing Battlefront. All the sound effects like the screech and laser blasts of the TIE fighters or the S foil locking sound of the X Wing exactly match the ones found in the movies. No expense has been spared to make Battlefront sound like you are smack bang in the middle of the Hoth assault. The Star Wars soundtrack fades in and out at appropriate times, with the Imperial March coming in when Vader glides onto the field or the dogfight music kicking in when an AT-AT gets bombed by Y-Wing support. This goes hand in hand with the visuals, which are as close as you are going to get to being in the original trilogy, bar putting on a Stormtrooper outfit and staging a recreation out on the tundra.

Presentation wise, this is Star Wars down to the correct scuff marks on a Rebel blaster. The problem is that the gameplay rarely matches this attention to detail that DICE have put into making Battlefront as authentic as it can be. I’ll talk about Walker Assault first, as that is where most people will spend their time in the beta. In its current state, the mode is an absolute mess of balance issues. Playing with randoms on the Rebel side locks you into a loss right away, as the level of co-ordination needed to stage a Rebel victory is immense. For the Empire, you have so much firepower and advantage going into the assault that you are going to win 90% of the time as long as your team isn’t just jumping up and down for the entire match. The main problem is the power up/vehicle/turret dispersion heavily favours the Empire, compared to the feeble Rebel defence. With the Empire, you already have the two AT-ATs. On top of that, you can get TIE Fighters and Inceptors, Darth Vader force choking Rebel scum and AT-STs which can overrun the Rebel forces easily. You can also steal Rebel turrets and turn them round to kill the retreating Rebels, giving you even more firepower at your disposal. Moreover, the fact that the Rebels are constantly being pushed back and the spawn points mean that you can often get Rebels spawning just as the Empire rushes through the area, Stormtroopers can easily camp spawn points and vehicle drop locations, knowing that the defenders can’t do the same. 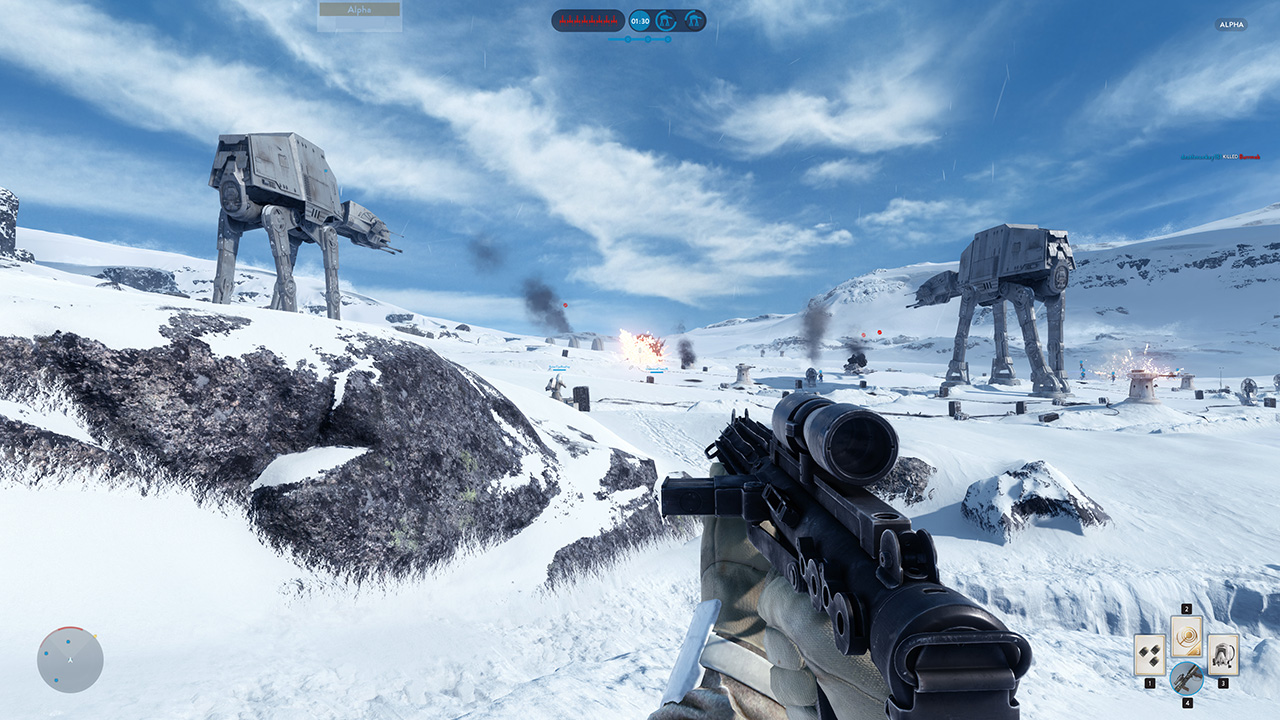 As for the AT-ATs themselves, the Rebels only get 3 chances to do significant damage to them and in public games, this window for dealing damage is mostly likely going to be small as teammates are more likely playing Team Deathmatch than actually capturing the uplinks. You finally get the Snowspeeders just as the AT-ATs are about to blow up the shield generator but even then, you can only tow cable their legs when they have been bombed by Y-Wings and you will probably either fail the minigame or getting blown up by a low flying TIE Interceptor, as the Snowspeeders have the turning speed of an obese cow. You can try to hit the AT-AT with the Orbital Strike powerup to do some decent damage but there is no set spawn point for this power up and trying to get a steady lock on the Walkers will mean you’re going to get sniped by some trooper with a Cycle Repeater half way back the map. The Rebels are at such a disadvantage with their base spawns, with the Echo Base spawn being very susceptible to a Stormtrooper placing a Blaster Cannon just outside the exit and mowing down anyone who comes out. The visual effect of you moving from the dark base interior to the light exterior also means you are blinded for a second or two as you exit the base, meaning you can’t return fire effectively as you leave.

DICE either need to give the Rebels greater air superiority, by reducing the number of Empire aircraft to balance their ground superiority (like in the actual Hoth assault) or grant safer spawn points to the Rebels so defenders can set up a proper position rather than constantly running about trying to establish some resistance. There also needs to be a lock on the Rebel turrets, meaning that Stormtroopers can’t just hop in and turn their guns around to fire back at fleeing foes. Limit their turning to 180 degrees, or have them blow up as the Rebels move further back. 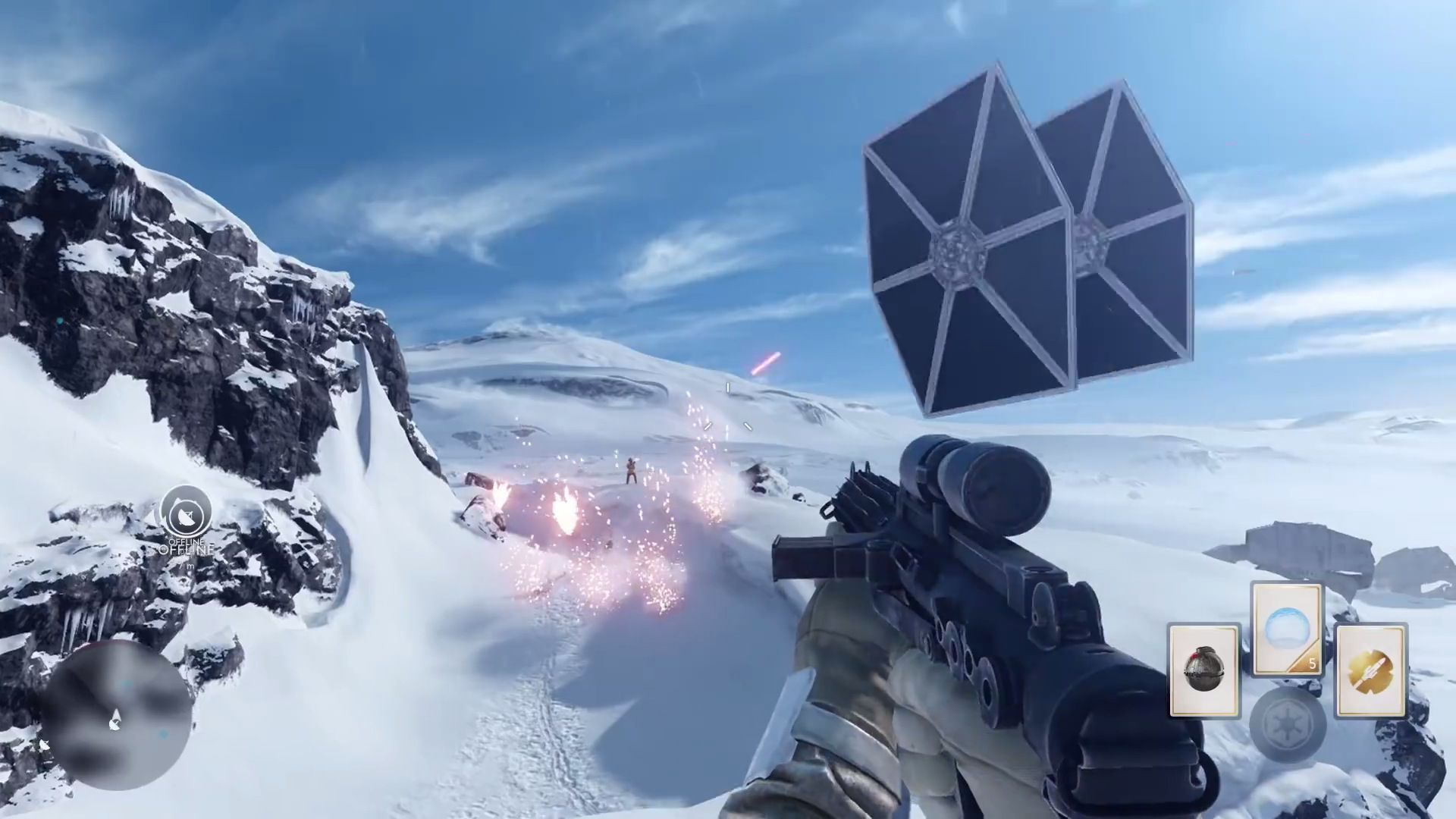 Ian: I feel I’m just going to be an echo of Sam here, but I came away from the beta with any overwhelming sense of meh. It looks and sounds the part, there is no denying that. The pew-pew of the blasters, the iconic soundtrack kicking in at key points throughout the battle, the clunk of the AT-AT as it strides forwards. Unfortunately DICE have spent so long making sure that Battlefront looks and sounds like Star Wars, they seem to have forgotten to make a fun game with it. The basic gunplay is simple, as you’d expect from a battlefront game; this isn’t Halo or CS:GO, you won’t be outplaying anyone with your sick moves very often, you’ll walk out, see someone and shoot them before being murdered in turn by someone else who spotted you first. It’s fun, shallow but still fun at its core. Sadly the gameplay modes on offer let down the core gunplay.

Walker Assault is as unbalanced as a deranged gorilla walking the tightrope, with the rebels having to overcome a ridiculous disadvantage to pull off a win. I managed it a few times, but I was playing with a team of eight friends (and even then we didn’t win consistently as the Rebels, and never lost as the Empire). The walkers are only weak to attack at a few key points during the match and trying to co-ordinate fire on them during these brief windows is no easy task, especially when you still have the entire enemy team to deal with. 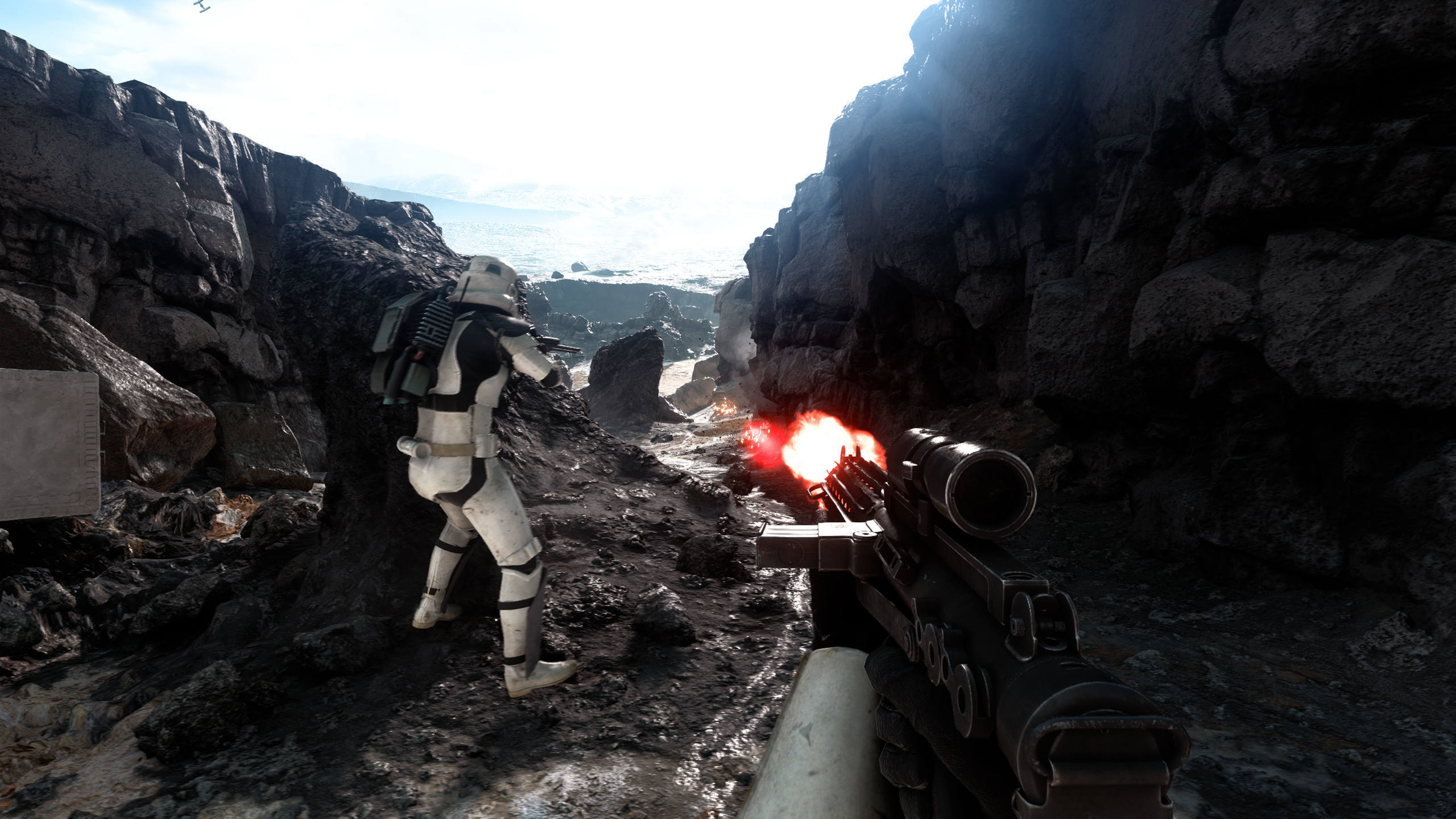 Flying about in X-wings and Tie Fighters is a nice escape if you get sick of the trench warfare down on the ground, but there are some balance issues in the clouds as well unfortunately. For starters, when you spawn in a flyer you are locked into a straight flight path for a few seconds, giving anyone already in the air ample time to swing around and line up their shots. This results in spawn camping of the skies as Tie fighters just circle the spawn and wait for you to trundle in, helpless to do anything before getting smoked the second you get control of your beautiful X-wing. Avoid this trap and the dogfighting can be pretty fun, though a match-up of two skilled players will quickly devolve into spinning in circles avoiding each other’s fire until one of you gets some support from a team mate. The rebels once again get screwed on the balance front in the final stages of Walker Assault too, because in the final stage most of their air force will consist of Snow Speeders which are great for tripping up the AT-ATs but absolute crap in a dogfight, leaving the Empire to dominate the skies.

The other game modes on offer were pretty underwhelming: Drop Zone on Sullust which is translates to crazy king of the hill in a non-descript bit of Iceland, and Survival on Tatooine which is a weak two player horde mode in, you guessed it, a non-descript bit of desert. None of these areas feel like they have any character or tactical significance to them, a far cry from DICEs previous works with Battlefield maps. It is bizarre that DICE didn’t put the game mode that 90% of Battlefront players will be playing into this beta, namely Conquest. Instead they try to push objective based game modes in a game without voice chat and without squads.

In the end, Battlefront is a beautiful and immersive, but ultimately hollow experience based on this beta. It is entirely possible that the main game will offer something more than this, and we intend to cover it and find out, but things aren’t looking great. Stick with us for more on Battlefront and may the force be with you, always.