Welcome back champions of the eight realms. Join us as I delve into the terrific supplement Champions of Destruction, by Cubicle 7 Entertainment, for the epic fantasy roleplaying game Age of Sigmar Soubound. So, gather your pig iron gutrippers and below your biggest Waagh! It’s time for the fight!

What is Soulbound: Champions of Destruction?

Champions of Destruction is one of a handful of character supplement modules for the Age of Sigmar Soulbound tabletop RPG. In Soubound, you play as part of a god bound group to achieve greater goals that affect the stability of eight realms. A tactile, action packed, and rich lore filled experience where you truly feel powerful. You can read my full review of the game and the core rule book here.

In this supplement there are 5 new races each with rich and satisfying lore; over 20 new archetypes to destroy your enemies with; and oodles of new spells, feats, and miracles to bring the good fight. Not only that but there are new rules and features that bring life during and between adventures. These include choosing the da boss of the group and challenging the current boss for leadership.

On top of all that, this book of cunning and brutality guides the players and Game Master on what to expect adventuring with a band of destruction inclined champions. These include new short and long term goals, utilising the Waaagh! mechanic, and the opponents you might face. Get the blood pumping for smashing time!

A deeper look into the new shiny bits

As discussed previously, there are a plethora of new character creation options. These appeal to veteran warhammer enthusiasts and newcomers alike. The new races include the scheming and puny Grots, the cruel Hobgrots, the glutoness Ogors, the wild and brutal Orruks, and the brutish Troggoths.

With the 20+ new archetypes there is so much choice and so many opportunities for a smashing good time. Each race and flavour is a unique facet of destruction. Take the Orruk Brute. A powerful twin axe brawler with a good Body stat and bloodthirsty feats to boot. But, due to its racial bonus and the archetype bonus, anything bigger or stronger than it only serves to make them rise to the occasion. More choppy chop!

There is also the Gloomspite Gitz Fungoid Cave Shaman who is a terrifying magic user. The new Moonclan spells are awesome! Are you under heavy fire and need cover? Engulf your zone in darkness with Night Shroud and give your group a buff to defence. Do you need to lay the hurt in a different zone right now? Use the Hand of Gork to scoop up your team and plonk them into the frey (or out of harm’s way). Spot some shinies you want to relinquish from a foe? Rob them blind with Nikkit! Nikkit! and restrain your target making them ripe for the pickings! A great utility tool box.

But who is the da boss of the group? Well, with the new rules and mechanics in this book you can find out. To briefly summarise, you can choose, randomly or not, the leader of your group at the beginning. But, throughout your adventure, you can challenge the current leader for the title. It is even encouraged too. Each race has different bonuses to being a Da Boss. So, having a leadership change adds new and exciting flavours for your adventures. This can range from the goblin-like Grots ensuring that you don’t lose momentum if you lose a fight and boosting your efforts for next time. To the brutally cunning Kruleboyz Orruk who allow for the use of extra actions, via the Mettle mechanic, during ambushes you spring upon your enemies. It brings another layer of depth and flavour to the table!

In between your adventures through the eight realms, your party can undertake Endeavours. These downtime activities allow for crafting, long term buffs, and even enlist allies. All of the Endeavours listed in Champions of Destruction are rich in flavour and can give your party a great edge in the adventures to come. One of my personal favourites is the very first one listed; Amuse the Bad Moon. By betraying an allied NPC over the course of week you have the chance to gain a buff to all Mind Tests for Grots and Troggoths. Not only is the mechanically useful, shaking off spell effects etc., but it opens up for some fun and creative descriptions of what mischievous deeds you enact on your ally soon to be enemy. Love it!

Another exciting new mechanic is The Waaagh! This replaces the Soulfire mechanic detailed in the Corebook. During your path of destruction and mayhem you can gather and use Waaagh! Energy. This benefits the entire party, unlike the Soulfire mechanics which only affects one character. Unleashing such primal energy infuses destruction characters with crackling surges of power. Such effects include granting free actions, removing conditions, recovering toughness, and casting spells or miracles as free actions. Instead of tipping the scales in your favour, this can just flip the entire table with devastating and satisfying results!

There are so many awesome new additions in Champions of Destruction. The races, archetypes, spells, feats, and miracles enhance an already memorable game with new and exciting flavours. But, what are some of my favourites? Well for starters it has to be the Rockgut Troggoth. It may not be the brightest button in the bag of mayhem but, it definitely makes up for it in brute strength and sheer survivability. If you favoured the Stormcast in the corebook then you will like the Troggoth. You can hit things hard with a 5 Body stat and with the regeneration racial trait, you can power through the battles healing through the damage and wounds you suffer. As a big boss you can even assist your allies pushing them to succeed, lest they incur your frightening presence.

When talking about feats, the one that stands out for me is Oi, Dats Cheating! Do you hate being shot at from ranged cheeky cowards? Then take this feat. If you take damage from such cowards then you can immediately move a Zone closer as a free action. Show them how a proper scrap is done!

If you are looking for pumping spells that just emanate destructive dominance? Weird Spells are fantastic for this. In pure Orruk fashion, stickin’ it to ‘em is what they do. Much like the spell Bash ‘Em Ladz! If you really need to teach those weaklings a lesson then increasing the damage of all allies in a zone within medium range will definitely do it. Overcasting it will pump it further. Whether it be an endless horde or just a huge and fearsome foe, they will succumb to your Waaagh!

As for miracles, Fungal Bloom under The Bad Moon set stuck out like a giant death cap. Sometimes the ability to solve a problem without the use of choppa or fist is rewarding. This is what the mostly utility based miracle Fungal Bloom enables. At the cost of just 1 mettle, you can apply a permanent effect to a zone within long range. This can be obscuring spores, mushroom caps making difficult terrain, creating fungal cover, or even simple structures for shelter or terrain traversal. The possibilities are amazing! Or, if all else fails, just make it all poisonous. Enemies can’t track you if they are dead or incapacitated. 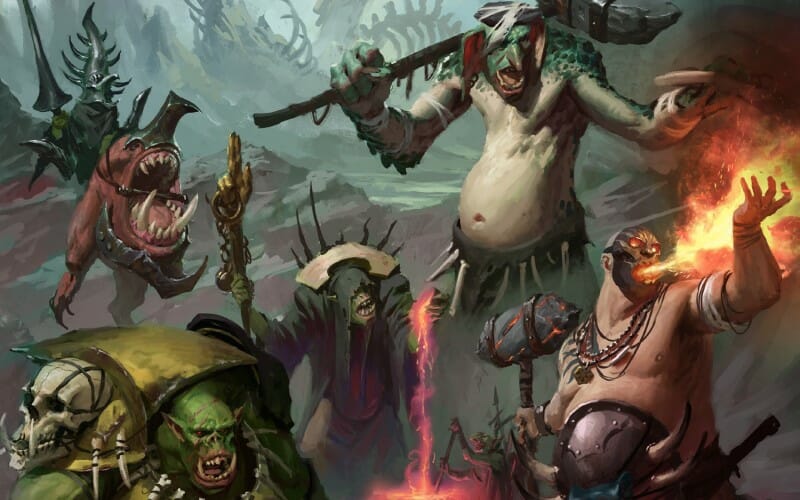 The Champions of Death supplement for Age of Sigmar Soulbound is rubble making Waagh! bringing tome of fun. It brings 160 pages of new rules, brutal and cunning character options, tasty lore, and a plethora of new tools of destruction for you to bring the good fight across the eight realms. Not only that, but is provides guidance and material, including additions to the bestiary, on what to expect adventuring as a binding of destruction. If you are a fan of the Soulbound TTRPG and are looking for a fresh new scrap with earth shaking potential then this is definitely for you!

I hope you have enjoyed the preview and impressions on the Champions of Destruction supplement by Cubicle 7 Entertainment. You can find it on the official store, as well as other supplements, the core book, and campaigns. Let us know your thoughts on the Soulbound TTRPG in the comments below. And share with us your champion of destruction and their exploits. Until next time, smile and game!