If there is one series of games that is pure fun and great for parties it is the Rockband titles. Over the years the different games in the series have brought more songs and even more instruments into the mix to make your bands more larger than life. But when Rockband 3 came out, there were issues to be dealt with. There seemed to be too much going on. So with this in mind, the developers behind Rockband 4 has decided to go back to basics. How does the game hold out as it stands right now?

First off the game goes back to basics with only having two guitars, a microphone and a set of drums. As much as it is sad to see some of the additional instruments leave, it is great to have a simple set up return for the new generation. But what has been done to the old to make it feel new? Well the updated hardware, supplied by Mad Catz, has some interesting new technology to help make the experience better for players. Latency issues have been seen to and now there is no input lag to be seen, at least in the build that was available at the event. The new strato-caster guitars are completely wireless with no need for a dongle like previous versions. They also include improved tilt detection in order to activate your overdrive gauges and automatically calibrate to your TV so you no longer have to spend time before playing setting them up. The wireless drums have now got high quality pads that are sound absorbent and velocity sensitive, making them more durable than ever before. Finally the USB microphone has a longer fifteen inch cable and comes with 48-bit response for accurate key tracking when you’re hitting those high notes. As much as they may look the same on the outside, the inside has a lot more support for the new generation. 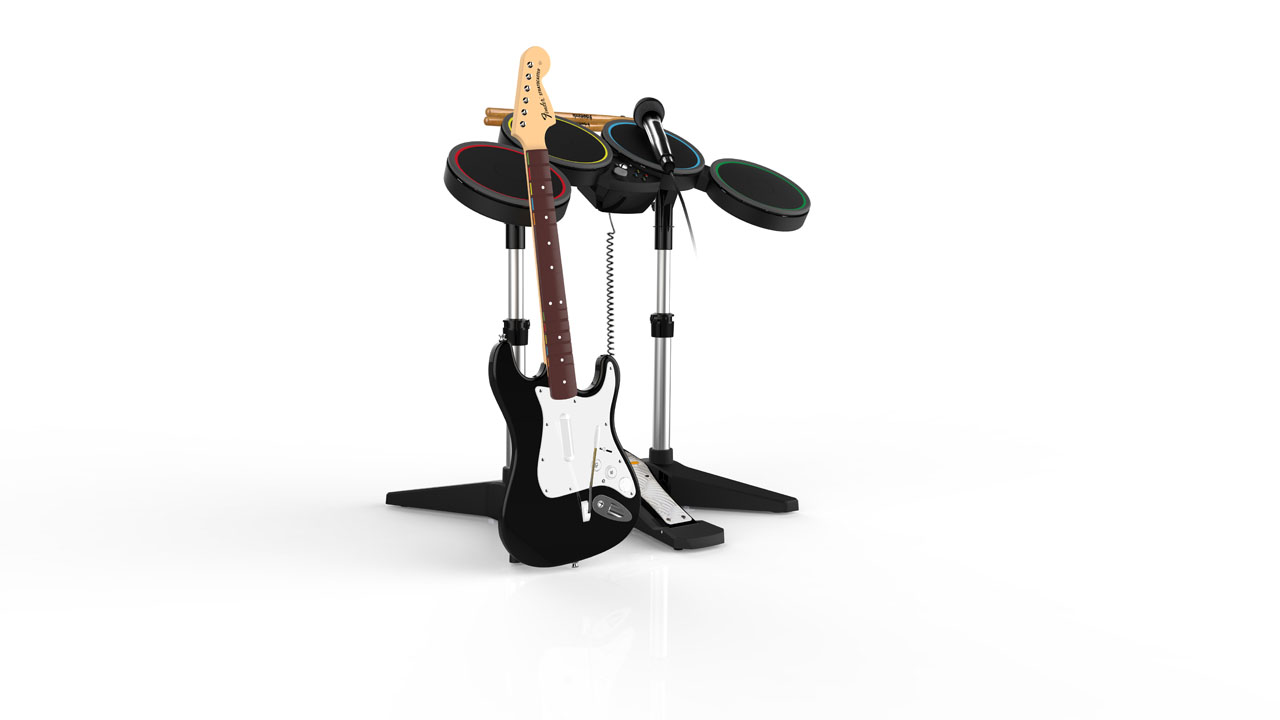 Another thing to consider with the peripherals is the new partnership between Harmonix and Mad Catz. The guys that have created the instruments for the games since the Rockband 2 era are now co-publishing the game, to make sure that their products and the title are equally as good as each other. They have also announced that any previous guitars, drum kits and microphones will work with Rockband 4. It is great to know as fans of the series may still have their prized instruments dusted up in the cupboards ready for another shot. However there is one thing to consider if you are getting the Xbox One version of the game and plan to use your old peripherals. You may use your old guitars etc, but you will need an adapter to use them efficiently with the new gen console. Mad Catz says that this is due to the changes of technology in the new Microsoft hardware and does not mean that Microsoft did this on purpose. Think of it as a problem that can easily be fixed. The combination of these two power houses guarantees great support for the series in this new generation. I am sure the technology in the hardware will constantly be looked at and improved if more iterations of the game are released.

Hardware to one side, the game itself has had a lot of time spent on it. The developers have gone back to play all the previous games in the series to see what went right and what went wrong. Their main focus for bringing back Rockband to the new generation was simple, bring back the fun. There is nothing quite like you and your friends forming a band and playing classic to current day tracks either to become the best or for a fun laugh. With this in mind, they did notice flaws in the previous titles development, even stating that the vocals in previous titles was just plain bad. The devs have been working on these flaws and have promised to give the title they know the fans and new gamers deserve.

One concern governing the return of Rockband is innovation. Does the game have enough in it to make a comeback in the new generation? Well the new title promises to have all you need. First is self expression and the chance to let yourself play the game as you want to. Many difficulty settings are available ranging from easy to expert that can be decided individually from everyone involved. Free style vocals allow players to make their own lyrics to famous songs as long as they keep in key. Very handy for those tough to understand or fast flowing lyrics. Dynamic drum fills have been added in to make the drumming experience more user friendly and less daunting to new and old players alike. An interesting feature discussed was a more player driven dynamic show that has more of a narrative to the game. Now whilst your jamming solo or with friends the audience, with improved reactions, will start chanting for encores or ask for certain songs to be played. This allows you to immediately jump in with another set without having to jump back to a menu to scroll through the many songs that are on offer. As well as this there is a new voting system that allows players to tap a colour to vote for what they should play yet. These choices can vary from certain bands, genres and even time periods. With all these additions the game certainly feels more like an immersive experience and not just a simple party game. It would be interesting to see if the developers are constructing a full on single player experience with this in mind, to literally build your rise to fame. 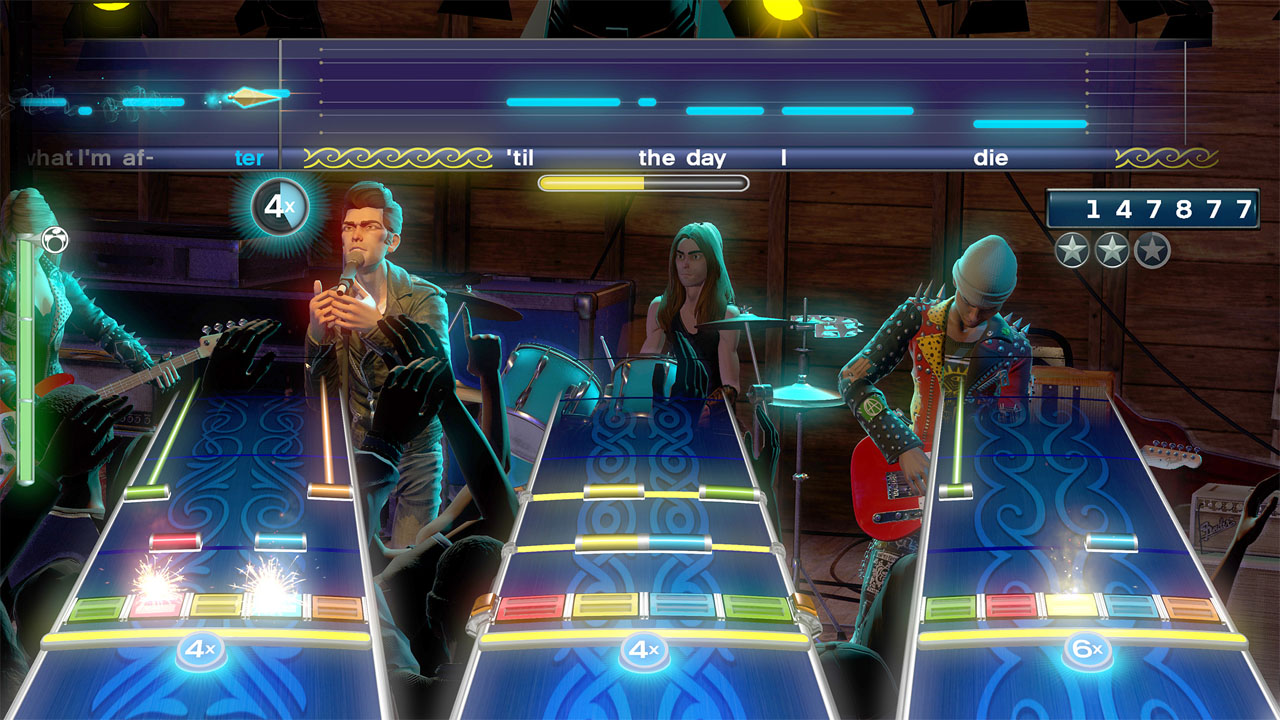 Of course what is a new Rockband game going to be if the song choices aren’t great. Luckily this time around the game has some great bands behind it. You will be playing songs from the likes of Avenged Sevenfold, The Killers, Fleetwood Mac, Spin Doctors and many more. There are over fifteen hundred songs on release to keep you satisfied, varying in genre and notoriety.  But how is this made innovative? As an added bonus to those who have bought song DLC for Rockband 3, all of your purchased tunes will be carried across to the new title. This could mean that your library on launch could be massive, with all your favourite tracks that you don’t need to purchase a second time. Rockband 4 truly encourages old players to return to the series without alienating anyone new to the game. It was not revealed if the songs would be available to purchase on launch if you did not get the DLC on the previous title, but rest assured they will come.

With doubts in mind and the worry of the series not having enough to truly make a return to the new generation, Rockband 4 has taken my expectations and thrown them out the window. The changes in both hardware and software are more than enough to make old and new players enjoy for hours on end. There are some slight gripes involving visual quality and FPS, especially since the band seems to be animated at 30 FPS whilst the instrument inputs run at 60 FPS, but this could simply be due to the preview build that we tried out. Is it worth getting back into? Yes. Especially if you have any of your old peripherals lying around. If they are damaged or sadly don’t work anymore, you can rest assured that Mad Catz has your back to get you back in the game. A great combination of teams, a nice selection of songs and enough new to shine on the PS4 and Xbox One makes this game one to deffinately look out for later this year.

What do you think of Rockband 4? Do you have any old guitars waiting for another session? Let us know your thoughts in the comments.