In the early 2000’s, Syberia and shortly after, Syberia II, were two of the best adventure games around. They follow the journey of Kate Walker, a North American lawyer trying to secure a sale in France, but the situation goes askew as she needs to find the legal owner of the property she’s trying to purchase. Her endeavour to find Hans Voralberg takes her to a mythical island called Syberia, where mammoths are said to inhabit. A sub-plot runs alongside Kate’s journey involving her troubled relationship with her fiancé, dictated by cutscenes and phone calls she receives. Syberia II essentially continues the story, with Kate helping Hans to fulfil his dream of finding and riding the mammoths inhabiting Syberia.

We at VGU were fortunate enough to travel to Paris for a private event at the Microids office, to take a look at the forthcoming sequel. Syberia III picks up exactly where II left off, despite releasing over 12 years later. The steampunk aesthetic returns as Kate awakens in a hospital bed next to an injured Youkol, the short intelligent humanoids that were first introduced in the second game. The first noticeable change from the prequels is that Syberia III is now in a highly detailed 3D world, as opposed to the 2D appearance featured before. It was built from the ground up for PS4 and it shows, with a lot more detail in the surroundings while sticking to the original artistic direction – snowy steampunk has never looked quite so stunning.

One major criticism of the original two games was the difficulty levels of some of the puzzles; players complained they were too obscure, that they often needed help from a guide or walkthrough, and that they often didn’t make too much sense. In Syberia III, they’ve attempted to amend it by making sure all the puzzles follow some logic, but for those players that enjoyed the brutal difficulty of the originals, there’s a difficulty level which removes all help and assistance. The general basis for the puzzles has stayed the same, with everything sticking to the traditional point and click genre. One useful addition is the music; as you get closer to solving a puzzle, the music intensifies as an audio clue. It’s composed by Inon Zur, the same composer in the second game who also composed music for huge titles such as Fallout 4, Dragon Age and Prince of Persia.

In the demonstration we saw, Kate was given permission to leave the hospital area by the main doctor, if she could figure out how to unlock the door herself. Exploring the courtyard led her to finding the key, but the mechanism for the door had another puzzle which required the player to rotate specific aspects to match the symbols. Nothing that aches the brain too much, but it’s expected given that it’s the first puzzle of the game. Shortly after, we jumped forward to conversing with a man called Steiner in his workshop. Unfortunately for him, he suffers from a heart problem and he became so fascinated with Kate’s necklace, he forgot to take his medication so it was up to Kate to search his workshop and find the solution that will help him. Going down to the basement revealed a note which says he needs to take his medication at 5:30, while she found a prescription in his desk with what he needs to take. Back upstairs had an empty mug which had a hint of tea, which she linked to the cuckoo clock behind where he was sat with some tea stains on. Setting the time on the clock to 5:30 and placing the mug below the bird caused the bird to pour tea and extend another hatch with a series of pills. Voila, Steiner was saved.

Taking your time to explore every area and exhaust all dialogue options rewards you with a lot of background information about characters and locations, filling in the lore and references to the original two games for those that have played them. The plot also touches on real life issues, as racism is prevalent against the Youkols and a key aspect to the story. Kate visits various different locations too, with considerably more variety in the scenery and environments. Syberia III is shaping up to be a solid successor and reboot for the series. The narrative is looking as strong as ever, with impressive voice acting from Sharon Mann as Kate once more. Some other characters from previous games also make a return, although who else exactly hasn’t been confirmed.

Syberia III is scheduled for a Q1 2017 release on PS4, Xbox One and PC. Keep your eyes peeled for our exclusive interview with lead designer Benoit Sokal early next week. 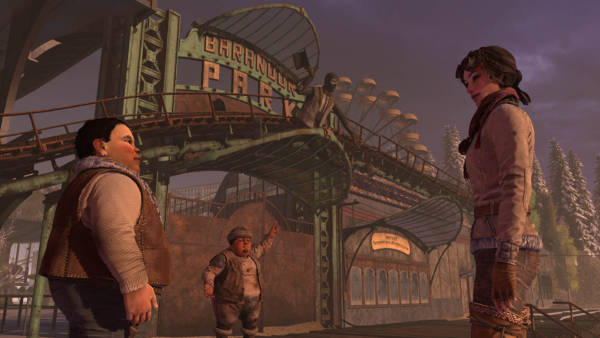