Planetside 2 has been a long time coming for PS4 owners, with numerous delays and setbacks pushing it from its initial June 2014 release date. We still have some time to wait but Daybreak Game Company (formerly Sony Online Entertainment) have finally allowed some lucky souls to get into the closed beta of Planetside 2. Is it shaping up to be an earth-shattering port for consoles, or is it worlds away from the PC version?

Having put some time into the PC version of Planetside 2, I was not completely blind when going into this beta. I knew the general premise of the game, it being an MMOFPS where you have to try and make your faction the ruling presence on the planet of Auxaris, by capturing locations and blowing up any vehicle or human that doesn’t have the same logo as you. Luckily, this meant I also had a grasp of the basic UI and how upgrading weapons and vehicles worked, as to make my getting into the fight as quick as possible. Unfortunately, the beta currently has no great way of teaching players the sheer number of systems and menus that you’ll have to negotiate through in order to even start to get your head round Planetside 2. While new players are put on a starting island until Battle Rank 15 to learn the ropes, there is no tutorial system that is clearly presented to players as soon as they begin. There are some VR Missions which can teach you the basics, but they are so expertly hidden amongst the multitude of terminals in the starting warpgate, that new players will more often than not just breeze straight past them, end up spawning a Galaxy and promptly crash it into a nearby field.

For a beta, Daybreak should have at least given players the option to start with the VR Missions straight away, so they can get used to not only the console controls, but how the hundreds of different things to upgrade and points to capture all mesh together. Even as someone who is somewhat versed in Planetside 2, I was completely confused by how to do basic things like change my spawn point or my class, due to the cluttered and unresponsive menus. It would sometimes take up to 5 seconds for the game to register my pressing of the map button and the map actually presenting itself and even then, actions like Redeploy or Instant Action would either sometimes work, or never work when pressed. This began the worrying trend of basic functionality problems throughout my time with the PS2 beta, which made it feel more like an alpha than a beta program.

For me, a beta usually means that the main systems and menus are pretty much finished and that they are just fine tuning and bug fixing on a smaller content scale for the main release. Take the Hearthstone or Battlefield Hardline beta for example. You probably didn’t have all the cards or you only had one map to play on, but all the menus and basic systems worked well. For Planetside 2, it just feels like this beta was pushed out the door in order to give fans something to play, rather than turn up empty handed for another month. Menus would stack up on themselves, respawn screens would not let me toggle between spawn points, revive messages from 2 playthroughs ago would still appear whenever I died. I even had an instance where I died, the death screen appeared and then refused to fade, leaving me locked out as a corpse and forcing me to restart the whole game in order to continue playing. Another bug had it that I couldn’t even press X to start the game, when I could press the Home button and go between the PS4 menus with no controller problems. Normally, I could forgive a few glitches and problems here and there in a beta but the sheer number of bugs that either made me locked out from the action or even made me restart the whole game is just ridiculous. 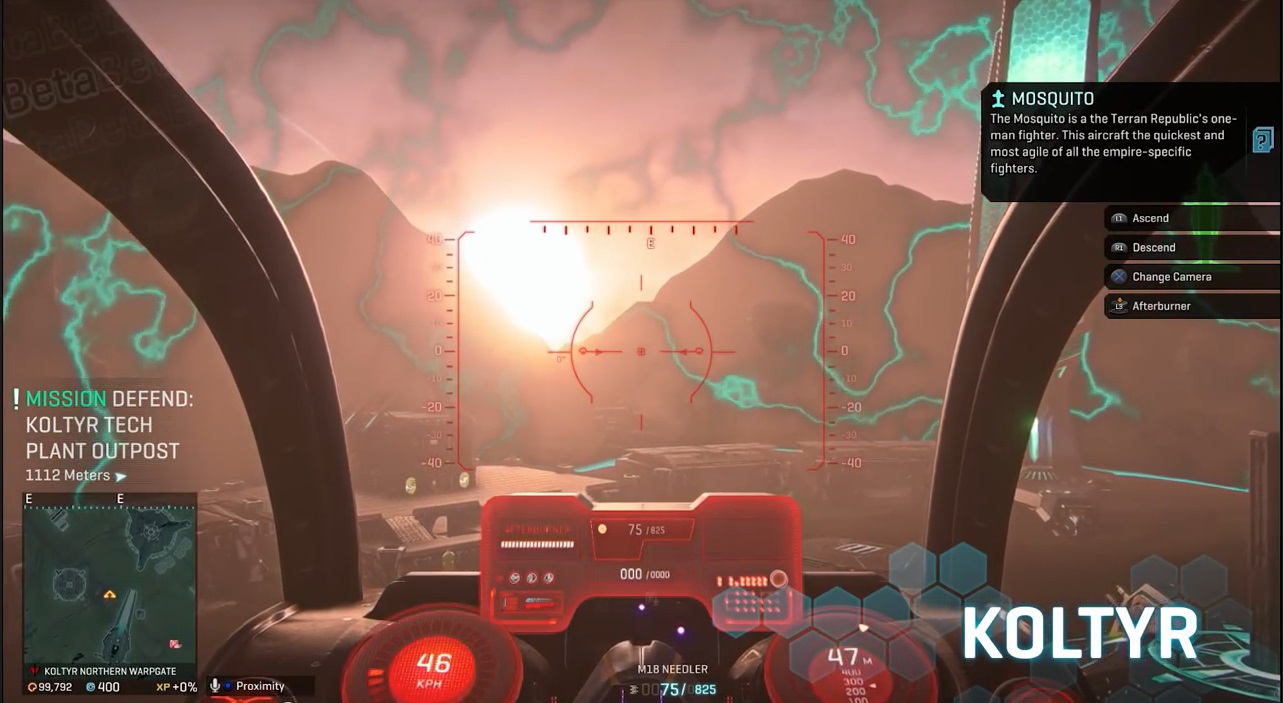 If I’m perfectly honest, I fundamentally don’t know who this beta is actually for. If you are a diehard Planetside 2 fan, you will be playing on the PC with the graphics settings maxed out and with the superior keyboard and mouse controls and if you are a newcomer, the sheer number of bugs and the lack of any real guiding hand throughout the game’s menus will turn you off the experience. As for the control translation from mouse and keyboard to controller, it just feels clunky. Switching between weapons and tools is a faff, due to the ambiguous naming of ‘tools’ and ‘utilities’ when concerning your class abilities. With the Engineer class especially, you will constantly be bringing up the wrong item due to the sheer number of buttons you have to press to activate a certain tool.

You also have to deal with Planetside’s notorious wonky vehicle controls on controller, which is hard enough when you are playing with mouse and keyboard. Flying feels incredibly floaty and slow, making dogfights feel like you are fighting in hot air balloons rather than futuristic jets, while you constantly feel like you are on ice when you are driving a tank or ATV. Compared to something like Battlefield, the overall vehicle feel is terrible, with you rarely feeling like you are in control of your craft. Also, due to the fact that vehicles can only be bought using special requisition points, one failed attempt at flying a Liberator or crashing your tank into a ravine means you then locked out from having another go until you have regenerated enough points.

Another fault specifically with the PS4 version is that of communication. On the PC version, you can at least default to text chat for co-ordinating strikes and talking to other players, while on the PS4 edition of Planetside 2, trying to type out a quick message takes an absolute age. This then means you have to rely on voice communication, which is rare enough in other console shooters like Battlefield, meaning that there is rarely any communication between other players. People will either be in their own private parties, which already shuts them off from the rest of their squadmates or there will be complete radio silence, resulting in there being no sense of co-ordination or teamwork in a game that ultimately relies on factions closely working together to defend and attack certain areas. This makes most skirmishes in the beta feel aimless, as players simply rush towards random points on the map and fling themselves at enemy units, resulting in none of the co-ordinated combat which is so satisfying on the PC version.

Daybreak are constantly tweaking control setups as the beta goes on.

Besides the console specific issues, replaying the beta reminds me of just how odd Planetside 2 is to play. The actual gunplay seems incredibly loose, with there being no real kick to any of the guns and your success in combat relying more on if you spotted the enemy first rather than due to your aim and precision as a gunman. The upgrade system seems random, with weapons requiring only a single credit to unlock while gadgets like C4 requiring 200 to attain, with the way you acquire credits seeming to be completely at random. Yet for its faults and weird design ideas, when the stars aligns, Planetside 2 is a blast to play. When you have a full squad on comms, co-operating together to capture a tech plant, with a dedicated tank division clearing out any other vehicles while snipers reign death from miles away, the game is unlike anything that is on the market at the moment. Unfortunately, this moments are so few and far between and require so much co-ordination that you might as well not bother unless you have a dedicated group of fellow Planetside players.

So, I cannot ultimately recommend the PS4 version of Planetside 2 to anyone in its current state. It is absolutely riddled with bugs, the control system makes piloting vehicles a greater chore than it already is and the communication issues make it very rare that you will have that experience of mass co-ordination that it is so rewarding. If you really want to play Planetside 2, just get the PC version and even when the full version does eventually emerge for console, I would just stick with PC.