Being a member of the console peasantry and not really invested in Overwatch before this beta, this last weekend saw the opportunity for folks on the fence to finally have a go on Blizzard’s new hero shooter. Switching from the slow, methodical gunplay of Rainbow Six Siege to the bright and colourful speed shooting of Overwatch offered a welcome change of patch and while my initial thoughts were fairly down on Blizzard’s efforts, the beta has well and truly succeeded in not only getting me invested in Overwatch, but actually getting me excited for an AAA shooter.

The majority of people will now have played Overwatch but if you were out on holiday or doing something worthwhile with your life over the beta weekend, Overwatch is Blizzard’s attempt to crack into the growing hero shooter market which has started to emerge over the last year. It takes some MOBA elements, mainly in the ability and archetype system found in games like League of Legends or DOTA and combines it with the objective based structure of shooters like Team Fortress 2. It is very clearly an objective based game, there are no Team Deathmatch options so far, Overwatch is all about co-ordinating with your team to defend a point or push a payload to its destination. When picking heroes on the hero select screen, players will get little pointers on their team composition, advising them to add a tank to their roster or to not have three snipers on a control point map. With an open beta like this, you’ll always have the problem of random players going all Hanzo and giving the other team a free win but when combined with a pre made team, creating the correct team composition and then effectively swapping heroes out to counter the enemy was great fun and adds an extra layer of strategy to the already frantic combat of Overwatch.

The maps are almost as varied as the heroes on offer, with players moving from sunny Greece with its open piazzas to the tight corridors and floating platforms of a Russian munitions factory. Just like counterpicking heroes based on team composition, you will naturally gravitate to certain heroes based on the map choice. Pharah is great on maps with open skies so you can boost jump to spot enemy turrets while Roadhog thrives in Ilios and Lijang Tower where players can hook enemies and drop them to their doom thanks to the various death pits dotted about. There is the issue that certain maps do have paths which just lead to nowhere and stumbling into a room while roaming can lead you to getting lost for a few seconds but the actual map design is solid overall. The main problem is the spawn points for defenders on Escort maps, which are always located a mile away from the action. If you die in the first stage of an Escort match and you are playing a slow character like Zenyatta, the enemy will probably be at the first checkpoint by the time you’re back in the fight.

That is another thing players of other console shooters like Battlefield or CoD will have to adjust to, as not having a universal sprint button will trip many players up when they realise just how slow some of the heroes are. Luckily, Soldier 76 acts as a great intro hero for those making the transition, as his kit is very similar to that of classes found in CoD. Pharah is a good starting hero for those coming from Unreal Tournament or Quake Live, with Torbjorn and Junkrat acting as Overwatch’s version of the Engineer and the Demoman. You also get the occasional class inversion, with Mei acting like a reverse Pyro, following enemies about and freezing them in place rather than burning them alive. I found my niche quite quickly, gravitating towards tankier heroes like Roadhog while also dabbling in turret based heroes like Torbjorn but the beauty of Overwatch comes from learning and switching between heroes and not becoming bogged down in being a specialist. Every hero does have a counter so learning to switch between your favourites to defeat that Reaper who keeps giving you trouble will make playing much more enjoyable. 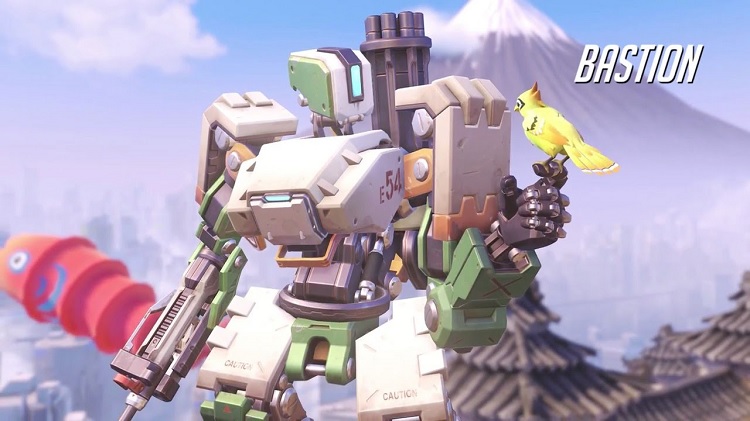 Over the beta, I learned to hate this robot and his smug little bird mate.

Once I learned not to be so hung up on playing the same role every match, that’s when Overwatch really got its hooks in me. Constantly switching heroes and trying new strategies kept me playing pub games which is a great feat for most shooters. It’s like a constantly refilling box of Quality Street, there is always a new chocolate to try whenever you want but you can always return to your old favourite if you come across the dreaded Coconut Éclair. There is a problem of balance, as certain heroes at this point in time are annoying to play against and pretty dull to play. The main offender is Bastion, the bipedal robot who can transform into a turret and shred through enemy health in about a second. At this point in time, fighting a Bastion is a recipe for controllers and mice to go through monitors, as not noticing one camped in the corner means you’re heading back to your respawn.

Moreover, actually playing Bastion is dead boring, as his only real use is to turn into a turret with his other skill just healing him up so he can stay in turret form for longer. By the looks of early Overwatch betas, Bastion has been a thorn in Blizzard’s side since his creation, being changed from completely useless to god tier from test to test. In his current state, the main thing I feel needs changing is his turning speed, as Bastions can quite quickly turn into a turret and waste an enemy hero before they can mount an effective defence. There are other heroes in need of changing, like McCree’s Flashbang Roll combo spelling death for anyone in range or Mei just being removed from the game all together but I feel Blizzard will have adequate data to make some final tweaks before Overwatch’s launch on the 24th.

It’s safe to say that the Overwatch beta has won me over. The distinct design of each hero, combined with the moreish ‘just another round’ feedback loop has got me well and truly on the hype train for the full game. If Blizzard tweak aspects like the Play of the Game feature, so it doesn’t always show ultimates or Bastions mowing down an entire team, and makes it easier to gain credits by getting Gold Medals or votes in the post-match queue, Overwatch could easily become my next gaming addiction.