One of Nintendo’s largest shortcomings is their misunderstanding of their audience; this was proven by the Wii U, a console that played it way too safe and in the end became a sore spot for the company. Couple this with a misunderstanding of brands and a control scheme which, according to most, was not the best, you would be forgiven to be thinking that the Switch will go down the same route. I’ve even heard people write the console off already. Dead on arrival they have said.

The aspect of feel and play mean a lot to the average consumer of video games. Even if they do not realise it themselves it becomes a core part in their understanding of the titles they play and enjoy. People do not tend to engage in the same activities over and over if they get no joy from doing them. This is where the Wii U had to shine; its quality of game had to overshadow its own platform. A platform that was not considered for a western audience and ideals that did not fit outside of Japan. The Switch, however, rectifies this in a big way by almost taking the idea of E for everyone to the nth degree. Everyone gets a tablet. Everyone gets a motion compared to a button. Everyone gets a touch compared to a click. These areas are what made the Nintendo Wii the console it was and just look at how well that did.

With this all in mind then you can imagine my apprehension as I converged on London to attend the Nintendo Switch UK Event for a hands-on play of the 9th generation gaming console. Being a Nintendo fan for most of my life, tons of thoughts were flashing through my head; will this be it? Will this make consumers not look at Nintendo with the same eyes as they do now, filled with pity and nostalgia? Barring all of that, what did I want from it? What could I possibly see to stay these wild thoughts? 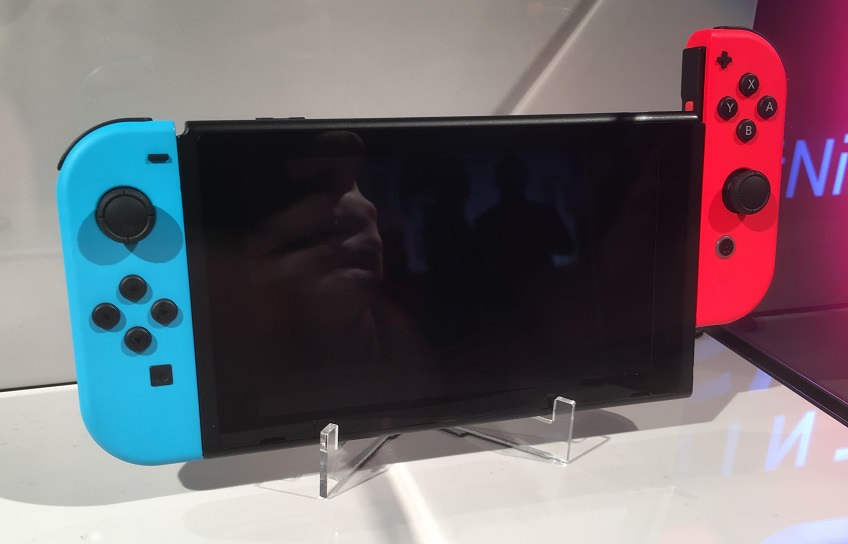 "The product itself is such a nice concept that when you get your hands on it, you can’t help but be a little in awe of it..."

First off, the Switch itself is spot on. I can safely say that it nails the audience it was aiming for, young adults with active lifestyles and a tendency to be on the move. The product itself is such a nice concept that when you get your hands on it, you can’t help but be a little in awe of it. The first thing you will definitely notice however is how light the console is. With the Joycons attached either side the Switch feels lighter than a Wii U gamepad which shocked me. It’s so light that it almost feels cheap, like a knockoff product of some sort!

This though is mitigated however by the Switch’s look; it’s sleek and quite stylish to hold. It looks like the kind of tablet that you would see business type folks on trains pull out of their coat pockets to send a memo. This doesn’t mean it has any less features; style has not taken precedence over function, the headphone jack, USB and micro USB ports and everything else you come to expect on a product like this are still present and accounted for.

The screen itself is also impressive; outputting all games I played on it at a smooth 720p and 60 frames. From Splatoon to Zelda, all the titles looked just as good as they did on the HD TV screens but in your hand. Combining this with a gyro sensor which makes the Wii U gamepads look like a joke and a comfortable feel in your hands during all types of play means that you should be having no issues playing this on the go.

Even the small things are great here. The transition from transferring the picture from TV to tablet and visa versa takes mere seconds and the stand can take a beating and props the console up in variety of ways to fit your need of angler play. The output of sound is even remarkable; at max volume, I could hear the game I was playing over the crowds and movement around me, something my other tablets fail to do sometimes. 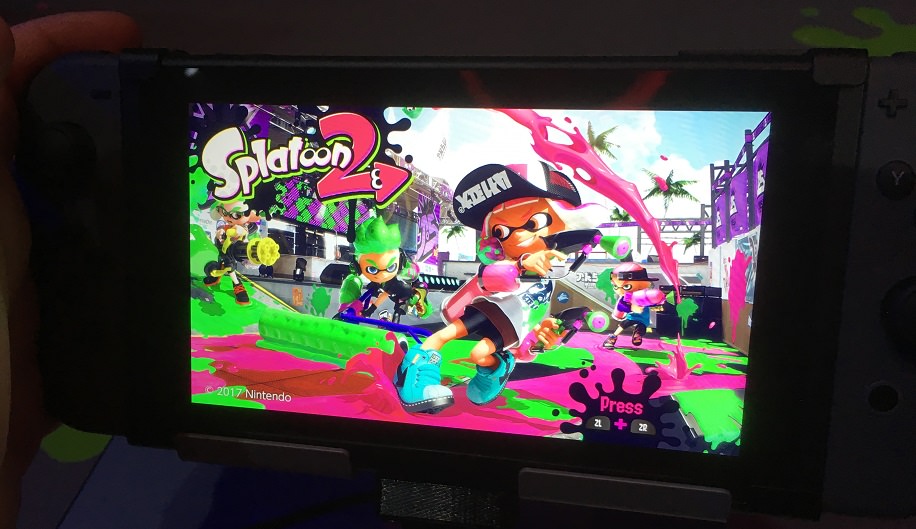 "From Splatoon to Zelda, all the titles looked just as good as they did on the HD TV screens but in your hand..."

The other area of the Switch is the aforementioned Joycons, the two effectively reboots of the Wiimote that come with the console. They can be used as two controllers when split apart, one controller for each hand and put together to make a standard gaming controller. Getting this out of the way, they also look great and, like the main console, and ridiculously light to the point of feeling cheap but there is a lot more going on with them than meets the eye.

Not only can they be used for motion controls which, when calibrated correctly, puts the early Wiimote’s to shame. Even the face button layout is nice which again is odd because of its size you would think the opposite to be true. This analog sticks feel great to use as well and are a nice distance away from the buttons in all controller types allowing for some serious button mashing and precise movement when required.

That being said, the size and weight is a strange issue. I have relatively large hands and I had no real issues with the Joycons. My wife, however, with smaller hands commented that she felt they were too light and had no real substance when she was playing games with them. This along with a few questionable button placements, namely the ZL and ZR buttons being far too close to the L and R buttons, made them a hard sell for her. 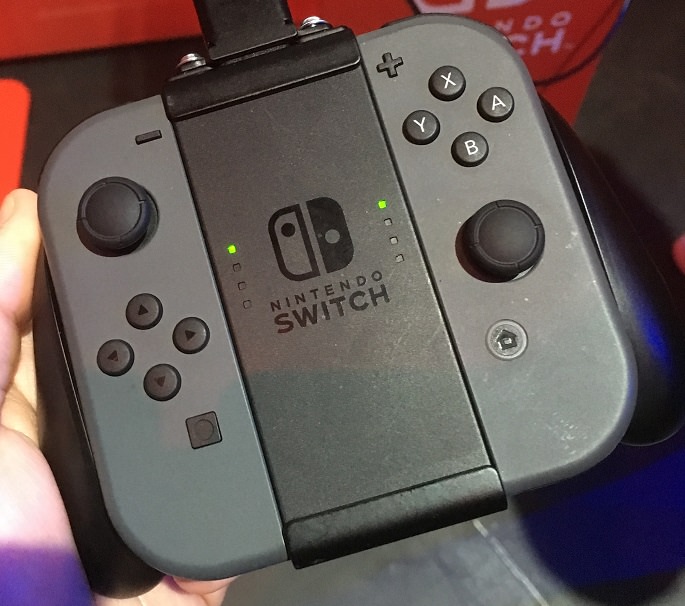 "...perhaps the best aspect of these controllers, and the biggest redemption for them, is the tech inside them."

But perhaps the best aspect of these controllers, and the biggest redemption for them, is the tech inside them. I mentioned the motion control feature being spot on but I can’t state enough just how responsive they were, it was fantastic and made playing games like ARMS and the 1 2 Switch games much more enjoyable due to this precision. The haptic rumble feedback steals the show here however, the feel of the rumble in the controllers is absurdly good to the point that you can realistically feel parts of the games you play.

For example, one of the 1 2 Switch games was a ball guessing game in which you pick up a Joycon and move it around in your hand. When you do this, you can FEEL the balls inside this imaginary box you are holding roll around and hit the walls and each other. To complete the game, you must guess how many balls are in the box based on the feeling. We all laughed when, during the Switch direct, they stated you could feel the ice in your drink in game as an example but good lord the technology works and it is amazing. For those out there who remain unconvinced, this tech is used in other titles as well to great effect such as for tension in a bow in Zelda and being knocked or hit in Mario Kart 8. It’s not just a gimmick, it is a feature that works and it works well.

However, £75 for an extra set of them is a hard sell for any consumer. I see now why they cost what they do, I would go as far as to say that they are perhaps almost worth it, but they must be experienced to really nail that worth home. 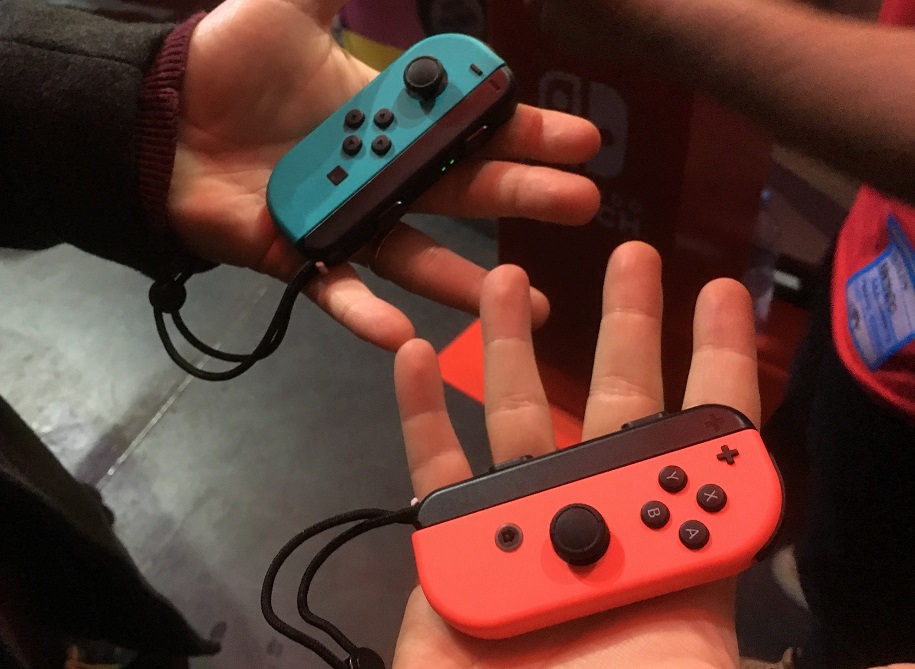 "I have relatively large hands and I had no real issues with the Joycons..."

Reading all of this then you would think that I was over the moon with the Switch, that I would call it, as a whole, a must buy and start the concluding shower of praise. Alas, I cannot. But I can also say that the reason why is not what you think. When you boil the Switch down it is, in reality, a high-end Wii U tablet with a controller. It is, what I believe, Nintendo wanted the Wii U to be in the first place and, based on the presentation and attention to a worldwide market this time, they have finally achieved it with the Switch. The console as a product is just barely worth the £280 price tag but it’s a hard sell for those who have not felt the thing in their hands, played with the controls and utilised the tablet side of the console, but it is worth it (if only just!).

The Nintendo Switch is a unique game console and it most definitely has a place in the gaming market. But more importantly, Nintendo have done something they have not done in a while, they have put a product down in front of us and said, “here it is, no over the top gimmick, no focus on a style of control, no heavy target on a type of audience”, here is just a hybrid console that epitomises the concept of E for everyone. They have taken the spark of what made the Wii work, the methodology behind the Wii U and the ideology of Nintendo and created, what I would refer to as, an honest product. And I really respect that.