It was only a matter of time until the wave of Souls clones emerged from over the horizon. Just as Miyazaki and his crew hopefully go onto pastures new, a vanguard of other developers are coming to step in to fill the bonfire shaped hole in many players’ hearts. Ni-Oh seems like the scout of this oncoming horde, testing the waters with a mix of the typical Souls stat allocation, Diablo-esque skill trees and looting with a hint of Ninja Gaiden’s combat. While this mechanical mix sounds great on paper, Ni-Oh is pretty terrible in action. If this is the future of this ‘Souls clone’, I’m not looking forward to the next few months.

While Samurai Souls may seem to be the most apt description for Ni-Oh from screenshots and trailers, it’s a little more complicated than that. It does borrow incredibly heavily from From Software, right down to the red summon sign-esque markers that dot the land where other samurai have met their end, along with a level up system which is almost identical to that of Souls but it adds other inspirations in for good measure. Unlike Souls where you have tons of different weapons to choose from, Ni-Oh splits weapon choice down into three separate classes – Katana, Axe and Spear. Katanas are your close range, combo heavy weapon, spears are for middle range while axes do massive damage but take about a year to recover. Rather than levelling up each weapon and becoming attached to a single broadsword or axe as you would in Souls, Ni-Oh has weapon drops coming in thick and fast, with katanas bursting out of the many ronin and yokai you slice open. Similar to Diablo, the weapons have randomly allocated stats and different rarities, working on the scale of rarity system that fans of loot heavy games will be used to. Therefore, you’ll end up swapping weapons out every few minutes or so, which comes in handy especially since weapon durability drops at an alarming rate. You get so many weapons so quickly that you’ll become overwhelmed with the sheer number of stats you’ll be staring at whenever you go to your equipment screen. If you thought something like Dark Souls’ stat screen was impenetrable, Ni-Oh requires a degree in statistics in order to understand how this katana is better than the exact same katana you are currently using.

This is the same for the armour you find on the corpses of felled samurai, as well as random accessories you’ll discover stashed away on the body of an oni you’ve just decapitated. For an alpha, Ni-Oh overloads you with so many numbers and figures that you’ll just end up disregarding it all and looking for the big blue arrow that tells you if your trousers are more armoured than the skirt you were just wearing. This leads to later problems as Ni-Oh has an equipment load system, meaning that you’ll eventually be weighed down by your armour, forcing you to wade through the swamp of numbers to move properly again. You won’t notice much difference mind you, as Ni-Oh’s movement is so erratic, with back dashes and sword swipes jerking your character and the camera all over the place. Fluid is the exact opposite word that comes to mind when describing Ni-Oh’s combat, yet it desperately wants to emulate other third person action games like Ninja Gaiden with its combo and stance system. 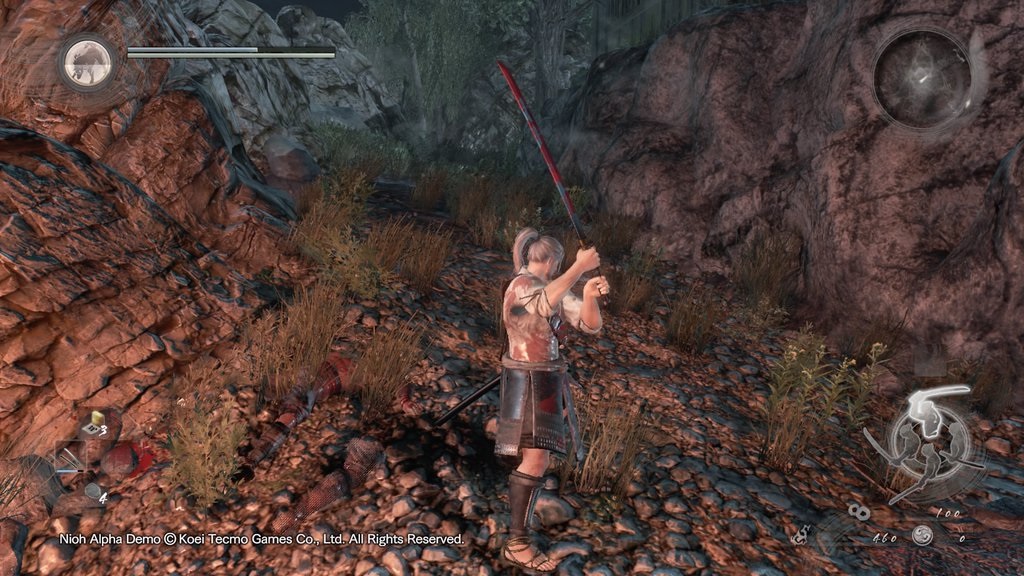 You can see William in High Stance here, using his katana with two hands.

Combat in Ni-Oh is fairly simple on the surface, with players having a light attack on Square, a heavy attack on Triangle, with block and dodge set to L1 and X respectively. The main depth comes from the stance system, which has main character William changing his battle stance to give players access to different moves. Your standard stance is Middle, which is built around blocking and parrying oncoming strikes. You’ll spend most of your time in Middle Stance, scoping out enemy moves and then occasionally striking back with a sword slash. High Stance is most like two-handing in Dark Souls, with William bringing his weapon down with all of his might to deal heavy damage and possibly break an enemy’s guard. Low Stance is your speed setting, allowing you to sidestep quickly around attacks before rapidly slicing at an open enemy. Swapping stances at the end of a combo is the key to keeping up your offense, with well-timed stance changes awarding you a Ki refund, Ki being Ni-Oh’s stamina system. While this sounds like this would lead to some fast and furious battles, duels in Ni-Oh often result in players slowly strafing round an opponent, getting a few hits in before the camera gets too overwhelmed by all the excitement and spins off to face the wrong way, or you run out of Ki and William has to take a quick breather and a katana to the skull. Many battle skills like parrying are tied to a specific stance and require players to unlock the ability via Ni-Oh’s massive skill tree system, where things like parrying are tied to weapon classes rather than being universal. These results in more stats to juggle and another thing to micromanage in battle.

You don’t have to worry about just weapons, oh no. William can also utilise ninjustu and battle magic but these are nowhere as cool as they sound. Ninjustu just gives you special items to use in combat, like shurikens and special talismans for short term buffs, while magic acts like weapons resins in Dark Souls, giving you elemental buffs to your current equipped weapon. There is some cool magic, similar to Ninpo in Ninja Gaiden but these are tied to your Guardian Spirit. These spectral animals are part covenant and part super gauge, giving you certain passive buffs depending on the beast you have travelling with you and a different ‘Living Weapon’ move to use once the Spirit gauge is full. These ‘Living Weapons’ have your Spirit inhabiting your weapon for a short while, giving you a massive Ki and damage buff so you can swing your flaming spear around and look pretty cool. Unfortunately, the buff is piss weak unless you invest souls (they’re not called souls but they might as well be called souls) into the special stat which determine your Guardian Spirit’s power. When in the Living Weapon mode, you can’t see your health bar and you lose the buff on taking a single hit, meaning your buff you spent ages saving up for, can be gone in an instant. It’s such a letdown of a mechanic, not only having no real battle use but feeling like a feature just slapped on to make players look cool for a short second before you’re killed by an ax-man you didn’t see hiding in a ditch.

It’s so much wasted potential. Everything about Ni-Oh sound cool on paper but the execution is so poor that you’re better off just playing a samurai character in Dark Souls. The setting seems ripe for interesting enemy designs, but the main demo area is the most boring sea town, dotted with the same cookie cutter ronin and the occasional oni who are absolutely no challenge to defeat. It does split off into separate mission areas once you clear said sea town but Ni-Oh had already bored me by this point. The two bosses are somewhat interesting, being a giant oni wielding a ball and chain and a Nue, an electric tiger demon with the face of a monkey. If there were more of the crazy yokai earlier in the demo, I would have been a little more engaged and would have soldiered through the dull combat but they come too little too late. Doesn’t help that the demo is so bloody dark, that I could hardly see any of the enemies I was fighting until they were right up close, ready to take my head off. There is some potential here, the speed of combat can be rebalanced, the camera fixed and menus can be made clearer but so far, I’m not at all impressed with Ni-Oh. I doubt how much Koei Tecmo can actually change seeing as it is supposed to release this year and it is probably feature complete, barring balance tweaks and maybe some of the late game missions. It’s looking like Ni-Oh-No, for this samurai adventure.