Welcome back Planeswalkers! The latest Magic: The Gathering set Ikoria: Lair of Behemoths is swiftly approaching release. You know what that means? Card reveals! Join us as we share some of our favourite reveals so far! 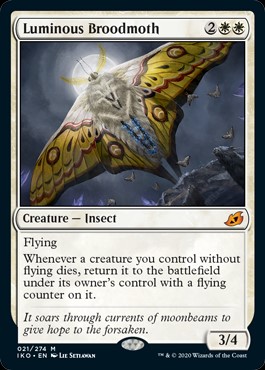 To start things off, let’s look at our pick from the White Mana cards. The Luminous Broodmoth is simply beautiful! This gigantic cousin to the Butterfly was brought to life by Lie Setaiwan and is as captivating as the moon also in this piece. Loving the colours of the wings! Not too much of a battlefield presence on its own. But, it is easy to see that when cast on turn 4 with an established board of weeny creatures, it can quickly get out of hand. The free value off one tactful battle phase can make up for the lack of stats!

Power over your Nightmares! 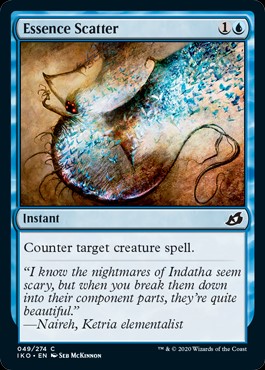 Next up is a card from Blue in the form of Essence Scatter. With so many terrifying monstrosities that could ruin your board, a card like this could keep the sweat from dripping from your brow. Portrayed wonderfully by Seb McKinnon with such a perfect accompanying piece of lore. This is sure to save many player’s lives as it would do in the world of Ikoria.

Do you hear hissing? 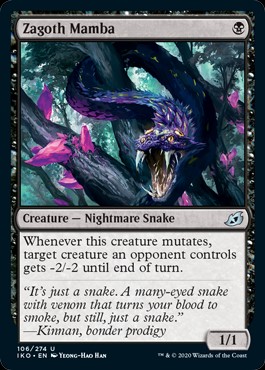 From the Black Mana cards there is a card that can be summed up with one phrase: Nope! All of the nope! Seeing a Zagoth Mamba during a walk through the forest would instantly make you turn the other way. And the visuals represent that, as presented by Yeong-Hao Han. As Flash Mutate creature spells have been seen in this set, a combination of them both would make the battle phase interesting. Either that, or just outright destroying lower stat creatures before or after battle keeps card value going.

Burn it with fire! 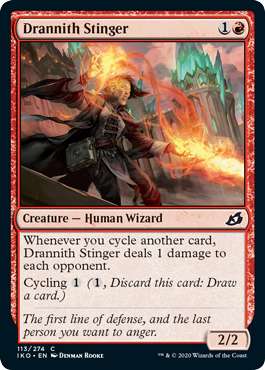 It was tough to select a human creature card in this round up. But, the flowing arcane fire combined with the emotion depicted on the Drannith Stinger was a winner. Created by Denman Rooke, this wrath filled firemancer has a gorgeous balance between emotion, scenery, and effects. As for the card itself, with a fair amount of Cycling in the upcoming set, whittling down your opponent turn by turn backed by an average body can seem appealing. Only time will tell how far players can take this card. Especially with multiple out on the battlefield!

No Monkeying Around Here 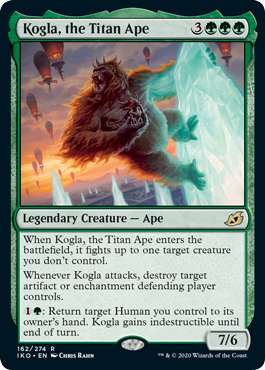 It wouldn’t be right to not call out to one of the greats. Even though this isn’t called King Kong, the reference is there. There are so many aspects in this beautiful artwork by Chris Rahn. The giant crystal in place of the Empire State Building, balloon vessels instead of fighter planes, and the signature pose of Kogla, The Titan Ape protecting his favourite human. The effect reflects this too. You can show your opponent who is boss by potentially eliminating a threat straight away, when it attacks, and become indestructible by bouncing the favoured human to your hand. Perfect. For mutating?

Run? It’s too late for that! 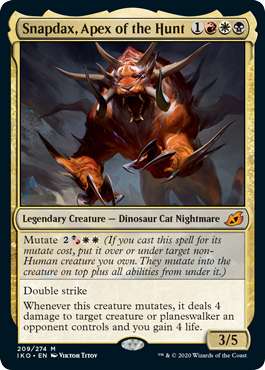 Moving onto the multi-coloured cards now. Viktor Titov fully inspires awe and fear of this dinosaur cat, Snapdax. Yes, I did just say dinosaur cat. Which makes it even more terrifying! A fair stat-line for the cost and double strike. However, it’s the mutate ability that screams awesome for this card. By mutating you can deal 4 damage to a creature or planeswalker then gain 4 life. So imagine mutating a huge threat, removing a threat, stabilising your life, then swinging twice! You can truly become an apex of the hunt!

Last up is another legendary multi-coloured card. Lutri, The Spellcaster, is a playful character with a lot of elemental love to give. It all draws you in; the water splashes, blue energy build up on the quills, and the juggling of a ball of red energy which matches the border. Beautiful work by Lie Setaiwan! For use in games, you can utilise the Companion keyword. By following the deck building rules stated on the card, you can keep this card in your sideboard. You can then cast it from your sideboard from which it remains in the game. Having access to a flash creature that can copy a spell upon cast can make for some tactical plays. Love a good trick!

And that is you lot for now. Keep checking back for more of our favourites from the upcoming reveals for Ikoria: Lair of Behemoths. You can play with the set early on April 16th if you have MtG Arena. Might be the perfect time to jump into the fray! Stay tuned for more news, reviews, and guides. Until next time, smile and game!

Filed under: Ikoria Ikoria Lair of the Behemoths Magic The Gathering

What is Magic: The Gathering Ikoria: Lair of Behemoths?
Powered by Magic