The nineties were a time when the PC was filled with classic adventure games such as Broken Sword, Simon the Sorcerer and The Secret of Monkey Island. As time went on, the genre faded in popularity, until the advent of digital distribution brought it back into focus. After a highly successful Kickstarter campaign back in 2013, Himalaya Studios have at last completed their development of Mage’s Initiation: Reign of the Elements, a traditional point and click Sierra styled adventure game, taking inspiration from several of their fondly remembered titles.

The main character is a young mage in training by the name of D’arc, who is on the cusp of completing his training. In a throwback to the original King’s Quest, in order to graduate, he will need to train himself in the ways of elemental magic, and then fetch three items of immense magical power. At the beginning of the game, you are asked to choose your elemental speciality for D’arc’s magical powers. Each distinct choice will determine which spells you will learn and the way in which certain characters will interact with you. For example, becoming a fire mage will make some characters warier of your presence, whereas an earth or water mage will not cause you be treated with the same hostility. You can opt to collect the items in whichever you choose, allowing for the player to craft their own destiny, instead of sticking to a linear narrative.

As well as puzzles and character interaction, Mage’s Initiation will often require you to use your obtained spells to fight magical creatures such as trolls or goblins. In a nod to RPG’s such as the Persona and Pokémon series, each creature has specific elemental weaknesses, so your choice of element at the beginning of the game will determine the difficulty of your earlier encounters. Throughout your quest to help D’arc complete his life’s mission, the plot takes many twists and turns, with some of them affecting non-player characters that you have to determine whether or not you can trust their motives.

The VGA styled pixel art which has been used for many classic adventures has also been used for Mage’s Initiation, but thanks to the power of modern computers, the resolution and colour palette are much more defined. As a result, the visual effects for the magic spells, the portraits that appear during a player’s dialogue and the hand drawn backgrounds are a pleasure to see in motion. The medieval styled soundtrack fits perfectly alongside the world of Mage’s Initiation, along with a high-quality voice cast which help to bring the game’s characters to life.

After reaching the conclusion of the time I spent with Mage’s Initiation: Reign of the Elements, it is clear that Himalaya Studios have put a lot of time and energy into creating a classic adventure game in every sense of the word. The dramatic narrative, alongside the replay value of choosing different elemental specialities and the beautiful retro styled graphics will not disappoint the hundreds of people that invested their money into the game’s creation. Himalaya Studios will be releasing Mage’s Initiation: Reign of the Elements next month on Steam. Be sure to stay tuned to VGU for our in-depth review, as well as a selection of hints and tips on how to use D’arc’s magical abilities successfully.

Filed under: Himalaya Studios Mage's Initiation: Reign of the Elements 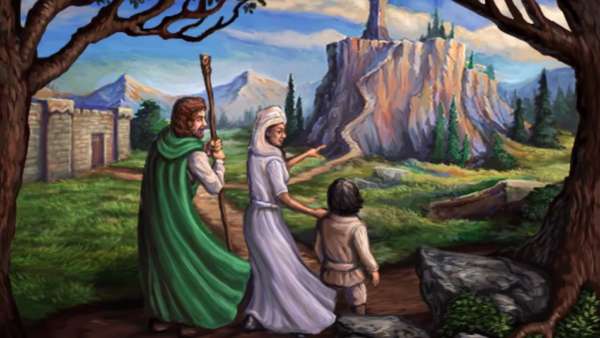 Mage’s Initiation: Reign Of The Elements Review
Powered by Magic