So it’s been two days since Nintendo officially debuted the Switch and people are already up in the arms. Then again, should this be a surprise? Since the botched launch of the N64, people have been quick to criticise Nintendo before really giving them a chance. This time around the main points of contention seem to be the price and its technical capabilities. I’ll simply start by putting my own thoughts out there that I feel that both of these “issues” aren’t really issues at all, but the floor is open to debate and what I may not find to be a glaring problem could easily be a deal breaker to someone else. In terms of my own preferences, I’m on the Sony side of the spectrum, but I’ve always had a soft spot for Nintendo. Perhaps more for their games than their hardware but I’m one of the firm defenders of the Wii-U, it was a neat little console that never got the time of the day, but that’s a story for another time.

For starters, it’s easy to see why some people may not be thrilled with the Switch’s technical specifications. When compared to the Xbox One or PlayStation 4, the Switch does seem very underpowered in comparison and the meagre 32GB looks paltry on first glance but, Nintendo do have ways around this. The games themselves are stored on cartridges which help to minimise the amount of game data that must be stored on the console itself, as well as the Switch being equipped with Micro SD slots that allow for quick and easy expansion This means no fumbling around with operating systems or replacement hard-drives. It’s a simple method that anyone can grasp, which is in keeping with the Nintendo ethos.

When docked, the system is capable of 1080p visuals when hooked up to a TV. When detached and taken on the go, the Switch has a 6.2-inch, 720p touchscreen that’s 1280×720. A slight downgrade that pales in comparison to many premium smartphones and tablets that are widely available. The proposed battery life of the system when portable is expected to be between 2.5 to 6 hours depending on the graphical demands of the game on the system. The unit itself is fitted with USB-C to allow for faster charging on the go to combat this. Personally, I’m a gamer who enjoys the tranquil nature of playing games on my sofa in my boxers, so whilst not a big sticking point for me, it could prove an annoyance for anyone who wishes to take the console out and about with them.

In terms of the graphical power, we know that the system is fitted with a customised Nvidia Tegra chip and little else. From the bevy of trailers shown by Nintendo however, the system looks capable of producing beautiful cartoony graphics that look incredible in their own right, even if they may not be as sharp and detailed as other systems. The Wii-U was similarly underpowered graphically, but it’s games had a technical consistency in regards to framerates that could put other consoles to shame. Take for example Bayonetta 2 that looked great visually and ran at a silky smooth 60fps, even when the game’s constant explosions and hair-monsters would bombard the screen.

As for the price of the console, a modest £279.99 here in the UK may sound like a lot when you can easily pick up a new Xbox One or PS4 bundle for roughly the same price, or get a second-hand machine for around £100 less. It’s a price label that was perhaps higher than expected but let us cast our minds back to when Sony’s and Microsoft’s black boxes first launched. Here in the UK the Xbox One cost a hefty £429 on launch, making it £80 for expensive than the PlayStation 4 (£349 respectively). Some argued that the price was due to it being bundled with a Kinect, but in retrospect we can all agree that the Kinect 2.0 did virtually nothing for the console and merely served to bump up the price.

But I digress, the important thing here is the games. You know, the reason we buy a bloody console in the first place.

No surprises here then that Nintendo are already off to a flying start by launching the system with The Legend of Zelda: Breath of the Wild. A highly-anticipated title with a loyal fan base that can’t wait to play it. Comparatively, what did the Xbox One or PlayStation 4 have at launch? Bar a few exclusives such as Knack, Dead Rising 3 and Ryse: Son of Rome the majority of the games available for both systems on launch were either multi-platform releases or up-scaled ports of games from the previous generation. There weren’t any must-have titles for either console until the likes of Bloodborne and Forza reared their heads. The Switch’s launch selection may be lacking in quantity, with only four titles currently announced, but there’s a great sense of exclusivity and quality assurance that comes with them. Not to mention a plethora of other titles that will be released in the near future. 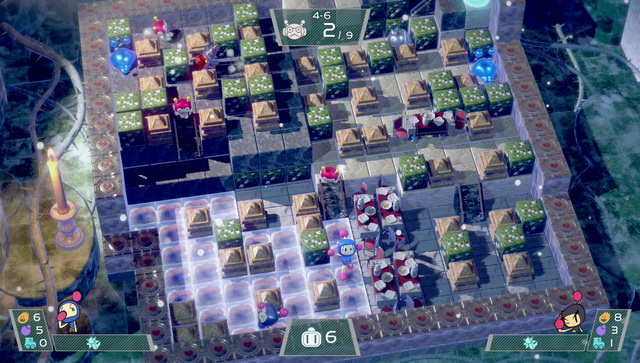 The usual heavy hitters are also going to be in attendance too, although this will be further down the line. Super Mario Odyssey looks so joyous and full of life that’s hard to not crack a smile watching its trailer. Alongside the simultaneously announced Super Bomberman R, it’s another bright and colourful serving of Nintendo goodness that strives to remind us of a simpler time. A much-anticipated sequel to Splatoon is also slated for a Summer 2017 release, giving the console a much needed boost in variety and online multiplayer, a facet that has seemingly dominated the market. We also have the upcoming Fire Emblem Warriors, which many are interpreting to be a Hyrule Warriors style affair due to the involvement of Koei Tecmo. Not to mention use of the word “Warriors” in the title. We also have the gimmick titles that push the system’s motion capabilities in the form of 1-2-Switch and Arms, essentially the Wii-Sports of the Switch canon. Both games feature head-to-head game mode that require players to use the motion controls to defeat opponents in an array of challenges.

The biggest difference between this line-up of both launch and post-launch games is their exclusivity with the Switch itself. Both PlayStation and Xbox do have their established franchises but a fair few of them have been dropping off as of late. The much-loved Uncharted series came to an end last year, with its final instalment being a huge seller but also one of the most highly anticipated games for the console. Naughty Dog are following this up with the equally as exciting The Last of Us Part II, but at this point not many people will be using that as an excuse to make the jump to current-gen this late in the system’s life.

Similarly, Xbox have their ongoing Forza series, one that doesn’t command the same high-profile exposure as the previously mentioned Naughty Dog games, but still has a large fan-base that keeps sales figures strong. Their Gears of War series did also see a return recently with Gears of War 4 but no further plans for any more games in the franchise have been announced. The majority of big-budget Triple-A titles these days are cross-platform, meaning that only a handful of games can entice a person to a certain console. Sony and Microsoft’s iconic characters were mostly absent at launch, waiting in the wings for their chance to dazzle us.

With the likes of Splatoon 2, Sonic Mania and Mario Kart 8 Deluxe all tipped for a summer release, closely followed by Super Mario Odyssey in the Winter; it’s easy to see where the Switch is going to thrive. Compared to the staggered release of other console’s flagship series, Nintendo are trying to give their customers what they want as soon as possible. Something that they may have learnt from their failures in regards to the Wii-U. Alongside the lesson that having third party support is essential to the system’s survival. Apart from Mario and

They may stumble along the way, but Nintendo’s strength has always been in its games and the experiences that they bring to the player, two factors that are often put ahead of raw power when building their consoles. Cutting edge visuals aren’t the be-all and end-all of video games, strong art-style and aesthetic choices are more appealing to a player than having the most realistic graphics. Sure, it’s easy to pass off the Switch as yet another misstep, but it’s this strong line-up of early release games that show that Nintendo have faith in their product and know what their customers want. Despite some detractors, the Switch has been the cause of much excitement amongst Nintendo fans. It looks like a possible return to form for the company, with a strong emphasis on games as a whole, not just limiting themselves to gimmick heavy party games. It may not be the most powerful console on the market, but I daresay it’s definitely the most interesting console to be released in many years.

Although I can’t help but think that Nintendo have missed a trick here by not using my suggested name of Spla-Two-N for the upcoming sequel. Oh well.