I’m not going to beat around the bush on this one; Breath of the Wild is an astounding game. Right off the bat, the game itself looks gorgeous during gameplay. Its almost oil painting aesthetic is a joy on the eyes regardless of what you are doing in game and there seems to be a LOT to do in this game. The scope of Breath of the Wild is massive; when it was revealed some folks online made the joke that it was Skyrim Zelda. After playing it, that analogy isn’t that far off.

From what I got to explore, the world is rich and filled with lots of things to do regardless of what avenues you decide to explore. This is mostly in part to the maneuverability that Link now has. A jump button is an odd feeling in a Zelda title but it and the ability to climb pretty much everything you can see opens up every area you decide to explore to the extreme. While playing, I climbed to the top of a ruined temple. Then kept going. And kept going, right until Link was hanging off the top spire of the whole structure! It was there I met a Deku who not only gave me a collectible item, but revealed a chest that contained bomb arrows. BOMB ARROWS. You can imagine how fun I thought the rest of my playthrough was going to be then. This design mentality is refreshing for the Zelda series and seems to be focused on rewarding those who think outside of the box; a feature that more games should have. I can only hope that this is reflected in the dungeons and other areas of the world.

Speaking of Link’s control, he moves well within the game world but his dash feature became an annoyance after a while. Link ran out of stamina FAST, so much so that dashing felt impractical when compared to just jogging. This is weird as it felt like he had more stamina when climbing and jumping than running. I hope that this is something that can perhaps be upgraded later on or at least mitigated in some way. We have seen link ride a horse (maybe Epona?) in trailers and the demo did contain a fast travel ability from the get go so maybe it won’t be as irritating. 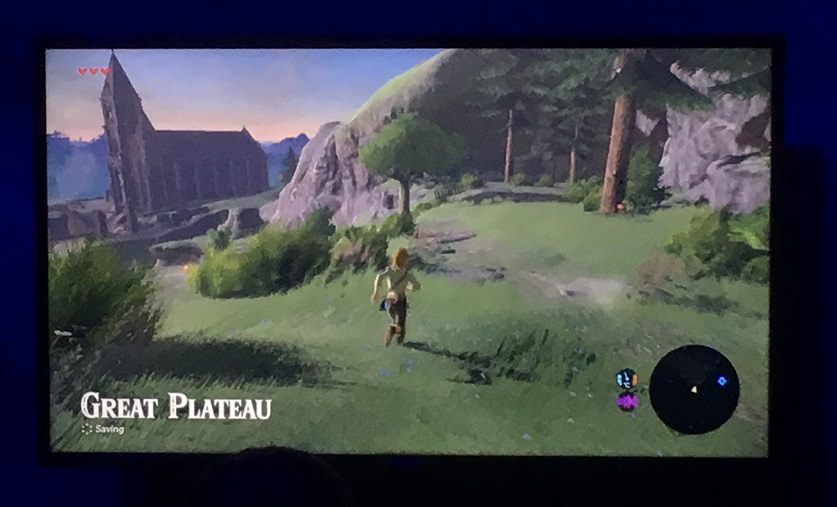 "...the game itself looks gorgeous during gameplay. Its almost oil painting aesthetic is a joy on the eyes..."

After racing out of the starting area and climbing over the temple, I took my new +14 attack bow with its bomb arrows and started to hunt for something to fight. I thought I would destroy whatever I came against. I was wrong. The combat in Breath of the Wild requires a more tactical approach than what we have seen before. You can fight in a variety of ways that do not consist of running in head first, swinging a sword. Even with my bomb boosted bow, a Bokoblin struck me down as I was being pelted with arrows from another. The targeting system is back and is useful to focus down an enemy, but its tunnel vision can be a hindrance if there are multiple foes as I found out here.

As I re-emerged after my Game Over I tried a different tactic; I waited until night time fell and snuck into the Bokoblin’s cave. There, I stole their weapons and retreated outside and began my attack thinking I was being clever. But even then, the Bokoblins started throwing rocks at me and did a fair amount of damage. After beating them I felt a sense of achievement; I had earned this win, and it was only against 3 Bokoblins. It’s not quite the feeling you get from doing this in say Dark Souls, but it was reminiscent of it and that was a fantastic feeling to have. Talking to other players, they all reported the same feeling which bodes really well.

As I was nearing the end of my session, suddenly, the game world froze and I heard Zelda’s voice. She instructed me to head to a nearby tower and place the Shiek Stone I had obtained on the pedestal. Another new addition, the voice acting, has not been in traditional Zelda titles and like other new features is used well here. All voices that I heard in my playtime were well done, had an element of emotion and were not that out of place. Although, anything would have beaten “HEY LISTEN” and anything Fi said at this point. 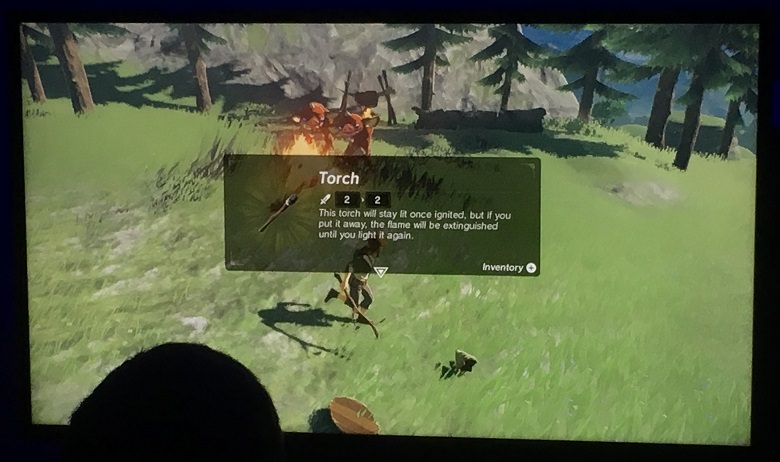 "My time with Breath of the Wild was a short one, but it was a lovely experience..."

I began to head to the tower as instructed and a scene started to play. I naturally wanted to get as much out of my session as I could so I was relieved to see that cutscenes will have a skip option. It’s not a massive feature but welcome to some player types and for repeated playthroughs. After reaching the tower, I took the Switch tablet from its dock and played the final part of my session on it. To my surprise, the game still looked great and controlled just as well in my hands at it did on screen. After being burned by the Wii U and how some games looked when played through that consoles tablet, this was a big relief. Even the sound quality didn’t dip that much when coming from the tablets speakers.

I climbed the tower and placed the Shiek Stone down as instructed and was then shown a scene of the black swarming mass that I can only assume, thanks to the pigs head that seemed to be part of it, was Ganon, engulf a castle with Link watching on as the game faded to black and thanked me for playing.

My time with Breath of the Wild was a short one, but it was a lovely experience. If the mechanics and methods of design that I played in this demo are carried across the entire game I would be a happy camper. But perhaps more interesting was the notion and realisation that Breath of the Wild has its own grounded reality inside it; the idea that you could shoot down a hog with fire arrows and get cooked meat, the ability to cook and craft items in various different ways, the thought that you could use the physics to assist your travel or in combat, it all makes the full game seem so much more exciting. I want to get stuck in and see what this world holds for me and see how far I can go in it. Now I understand why this is a release title; Breath of the Wild may just sell the Switch by itself.