Hello Games have seemingly broke through a huge barrier in games design, with procedural generation being taken to another level.

A few years back, scientists claimed to have figured out that our universe was nothing more than a 3D hologram encoded on a 2D surface, often compared to the image you find on credit cards. This of course for any who heard this news sparked thoughts of the Matrix, higher beings, and a plethora of alternate theories, debunkings and research. This concept is incredibly hard to grasp, and fair to say that many would dismiss it as codswallop. How could we, the most complex lifeform we know of, with the most amazing amount of random and seemingly chaotic possibilities, be nothing more than a program? Now though, with the dawning of a new age of gaming, and competitors in the industry vying for the latest and greatest concepts, I am almost starting to see where the hologram theory researchers could be coming from.

No Man’s Sky has some of the most promising looking tech for the future of gaming. They may be re-imagining, or rather refining a concept, but the method and scale of their iteration of this concept is extraordinary. Hello Games have certainly broken a barrier that gaming was coming up against, and that is the concept of limitation. I’m not going to go as far as to say that Hello Games have made a completely chaotic and unlimited universe that could match the complexity of even just our one single planet, but they have certainly smashed a wall that was preventing us from making a step in that direction.

Those who don’t know the technology behind No Man’s Sky, may be wondering what I am talking about here, so let me very simply sum up how their engine works. It is important to first look at how games work in the majority of titles we know today. The assets of each game exist in a drive, or on a disk or even in the internet somewhere. That rhino you passed in Far Cry 4, or that building you scaled in Arkham City, or even the asteroid you crashed into on Star Citizen exist at all times, somewhere on your hard drive or other applicable storage. No Man’s Sky’s asteroids do not exist until you get near enough that they would need to exist. They simply disappear when there is no one there to view them. So if they disappear, how do they know when to come back, and how are we all supposed to play this game together if the assets don’t really exist. The answer, put simply, is mathematics. 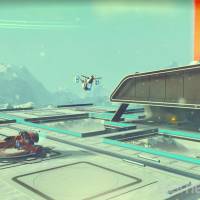 It’s said that it would take hundreds of billions of years to explore the universe of No Man’s Sky. Good luck finding other players. 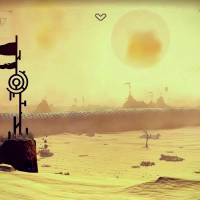 Of all the planets shown, this Dune like planet excites me the most. Yep, that’s a giant snake. 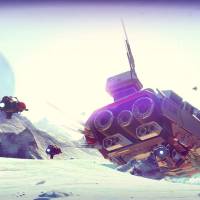 AI isn’t limited to the creatures you find on planet surfaces. The sky’s could be just as hostile.

Let’s assume for a minute, that 4+4 equals the Eiffel tower. If you were to leave the Eiffel tower for thirty years and then came back to that same equation, would 4+4 stop equalling the Eiffel Tower? Of course not, as mathematics are infallible. They are the one constant that we can rely on. Now, instead of the Eiffel tower, let’s imagine that a more complex equation equals an entire planet, including its weather and landscapes and even its lifeforms. Each aspect of this planet would, of course, require its own sum to dictate the varying factors, but the safe bet is that the answer would always be the same. An entire universe could be created in the very same fashion, and as you may have guessed, that universe is No Man’s Sky. It’s just a series of patterns and mathematics, each dictating the scope of a planet, and all other varying factors.

The way this all works in No Man’s Sky is through a design of mixing and matching. The developers at Hello Games are essentially building all the assets in their most basic forms, and then using these equations to dictate how those assets are distributed. They simply give their engine inputs, and it figures out the outputs. Add fur to this four legged creature and a snout and you have this iteration, take away the fur and snout, and add scales and a horn, and we now have that iteration. In some ways it is encompassing the theory of evolution, but in a completely controlled environment.

Which brings me back to my original point, that our existence may be nothing more than a hologram. Let’s say, and bear with me as this of course is entirely fictitious, that humans were to one day get to the point where we could mimic our own universe in a video game. We could design it so that all the different factors of life could exist, whether it is losing our keys or our arms, eating an ice cream or falling out of an aeroplane, writing an amazing piece of music or stubbing your toe on that damn coffee table for the 4th time this week.. Is that too much further away from the concept of No Man’s Sky? I mean, yes, it is light years of difference, but definitely something that every game is taking steps towards. We all want as many features as we can possibly get out of games, and it’s fair to say that the concept of an unlimited game is something we all wouldn’t mind trying out. A game where we can follow any path we wish, without the implications they would carry in the real world. 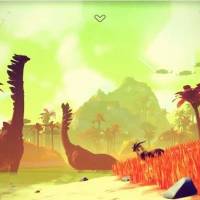 “They do roam in herds.” 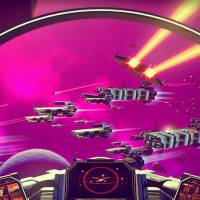 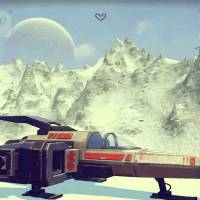 Each planet will take on many factors, with weather, the distance from suns, and even humidity levels shaping the appearance.

No Man’s Sky has opened a door that now has so many possibilities rushing out of it, that we will never be able to shut the damn thing. Procedural generation is definitely the future of open world games, and that should be painstakingly obvious by this point, what with all the games that have followed in what some could call the father of procedural generation, Minecraft’s, footsteps(though as fellow VGU writer, Sam Foxall, has usefully pointed out to me, there are many many Grandfathers and great Grandfathers of procedural generation). The word revolution always comes to mind when I sit down and study the technology behind No Man’s Sky, and each time I try and think of other ways to apply that tech, I see a brighter and way more exciting future for both gamers and scientists alike. Sure, like I mentioned before, this technology has existed in gaming for a long time now, but the application of it is what defines the strength of it, and if Hello Games manage to open more eyes to the vast possibilities, then I’d say that gaming will continue to expand and evolve at the incredible rate that it has since Pong was first introduced to the world.

Obviously at this point, all we can really do is speculate about what No Man’s Sky will actually hold for us, and whether it could really live up to what we are expecting, but one thing that is for sure, is that Hello Games have shown a new way of making our games, and if nobody draws inspiration from their design, then gaming might as well fall over dead now.