Google’s recent addition to their phone family, the Pixel 2 and Pixel 2 XL has been one of their most successful devices yet. We reviewed the phone giving it a 9, being almost perfect but a good foundation to built upon it for the Pixel 3 and Pixel 3 XL.

With any new phone, there are a lot of new functions, tricks and options to uncover some which can be hard to find. Follow our range of tips and tricks for your new Google Pixel 2 and get the most out of your new device which is inside Android Oreo 8.0.

Show Notifications With the Fingerprint Sensor 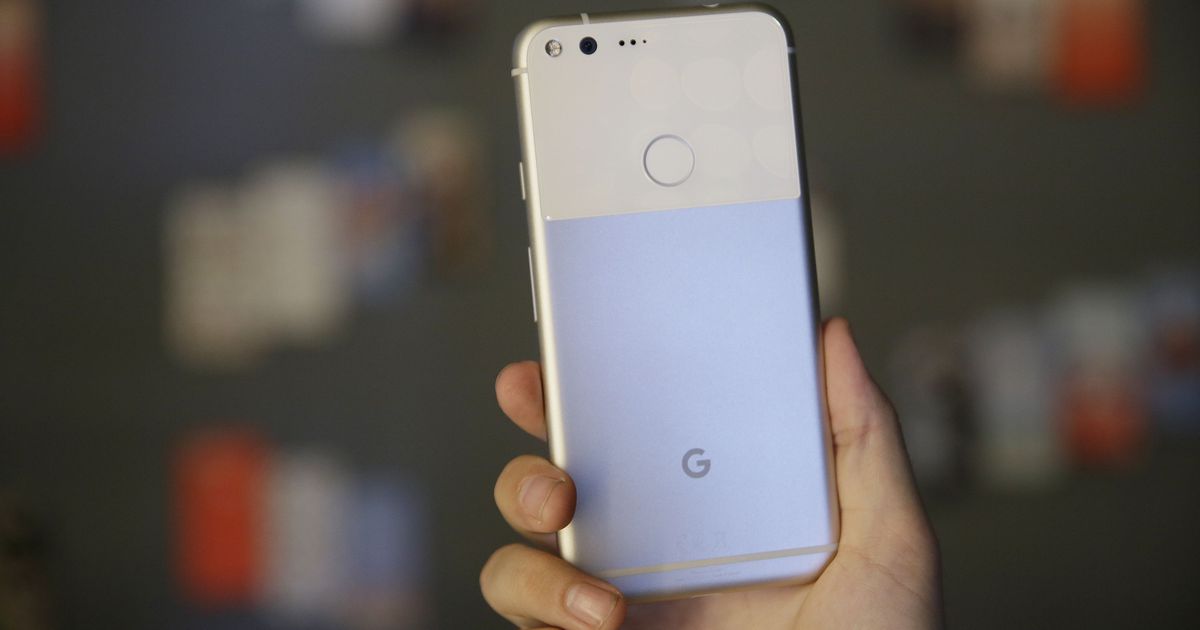 Not so much an issue with the normal sized Pixel 2, but with the Pixel 2 XL it is quite a big phone and if you don’t have very large hands reaching the top of the notification bar. Google has thought about this and allowed you to pull down the notifications with the fingerprint sensor on the back of your device.

Head to settings > system > Languages, inputs and gestures. Once there, tap on advanced settings and hit the “Swipe Finger for Notifications”. Once you have flipped said option on, you can swipe in a downward motion on the fingerprint sensor to reveal the notification tray. Do remember the phone needs to be unlocked before you can do this, without the need to stretch your finger to ungodly lengths.

Multitask, Two Apps Side by Side and Save RAM. 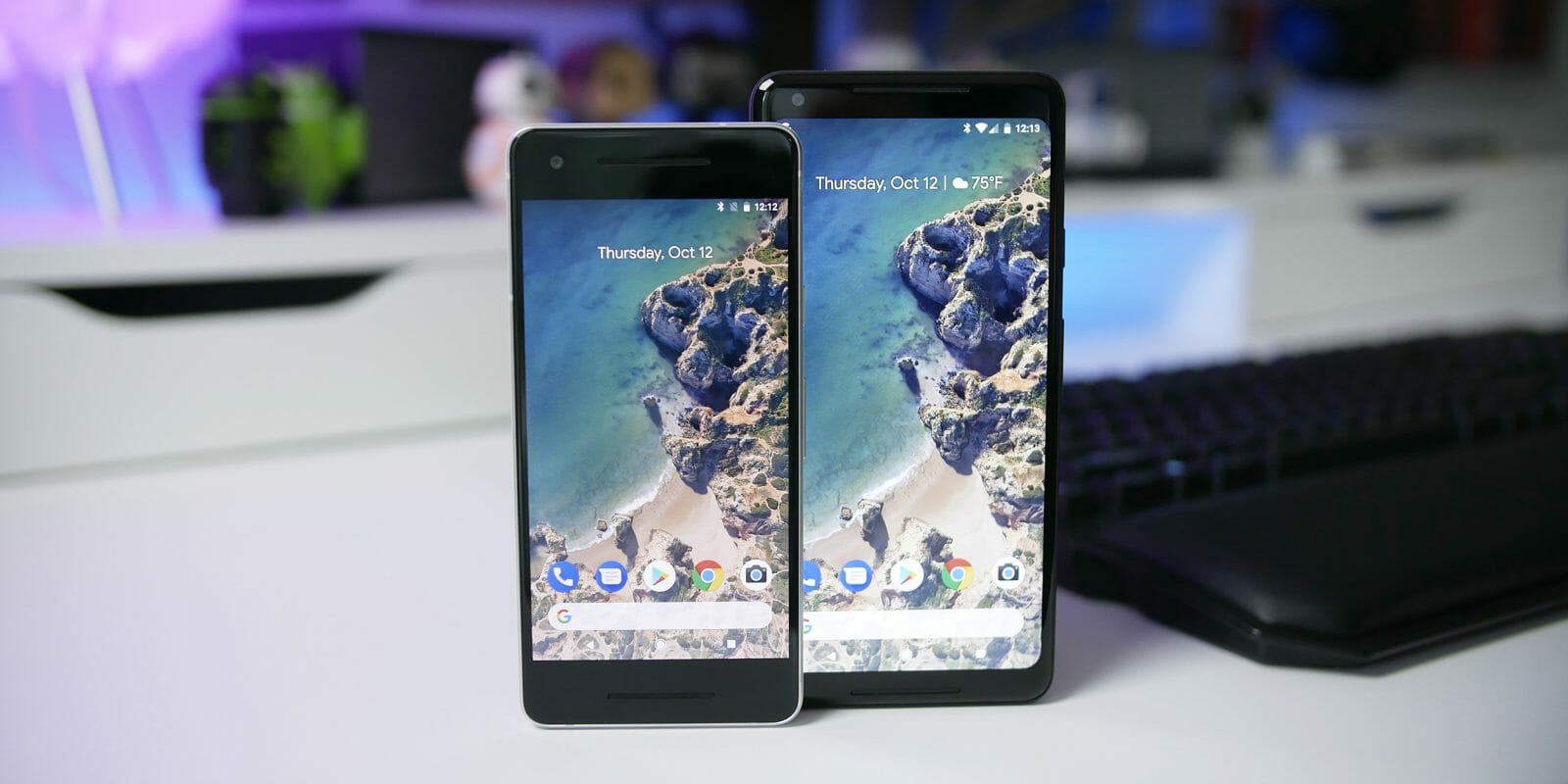 There’s plenty you can do with your new phone, loading whatever apps you want onto your phone from the thousands on the Google Play marketplace. You can customise it with a lot of different themes, colours and screensavers but with so many things to do, activating the split screen view is not as obvious.

The little square key on the right lower side that opens your recent apps also acts as a couple other handy functions, you just need to know what. If you double tap on the key it will quickly switch between that last two apps you used, so if you are using Facebook but want to browse something on Chrome and quickly switch back you can do in less than a second.

On top of the quick switch, there’s also the ability to have to apps open at the same time with one being placed horizontally on top of the other. To activate this feature, you just need to press and hold the square button that pushes an open att to the top and allows to select another from your recently opened apps.

Ask for Google Assistant at a Squeeze 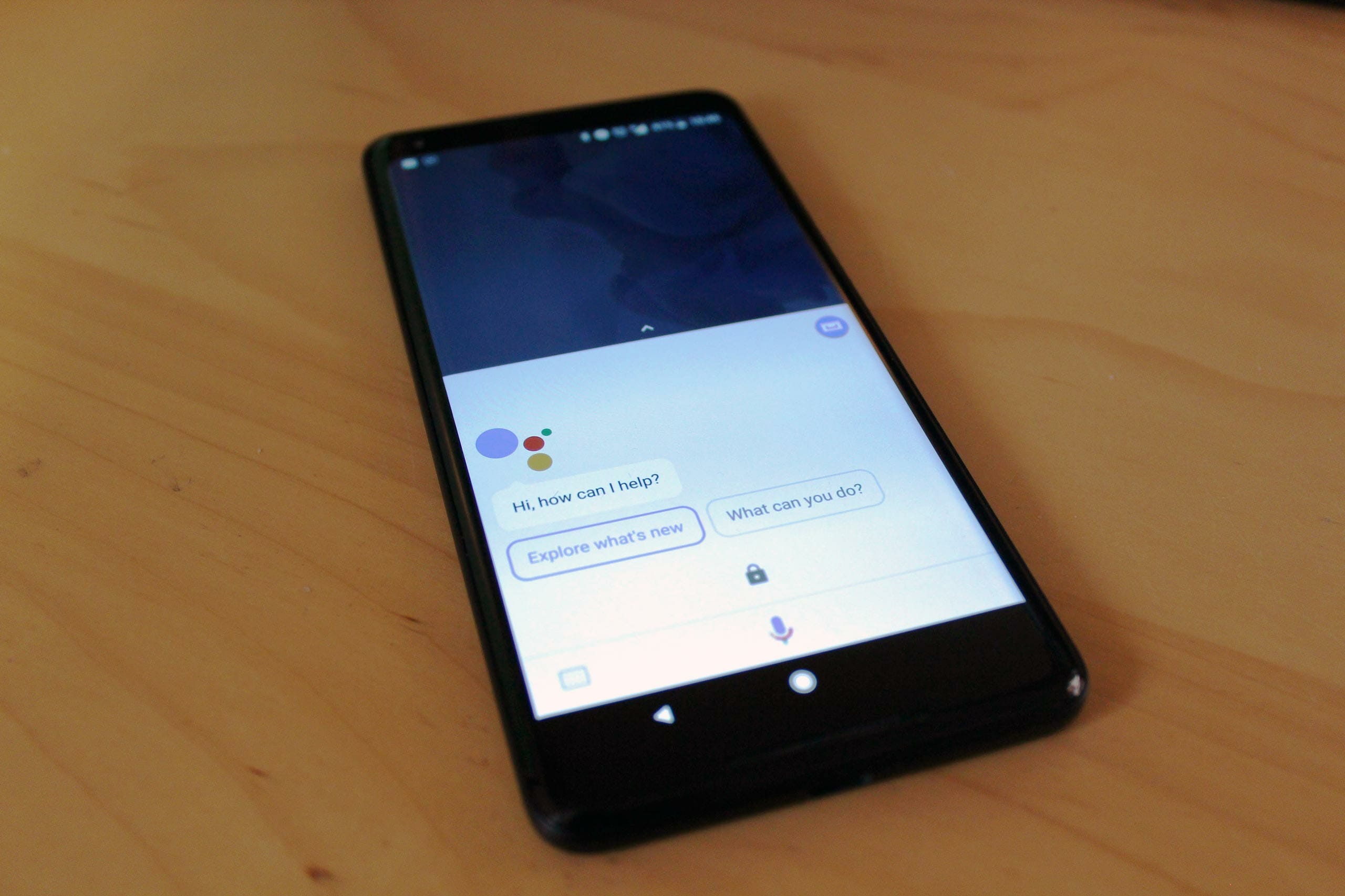 Google Assistant is one of the three AI companions along with Alexa and Siri but you can call Google’s handy little helper by squeezing the sides,

Both the Pixel 2 and Pixel 2 XL have Active Edge which has pressure-sensitive panels on the sides of the device on the bottom half of the phone. If you squeeze them fairly tightly you will activate without having to say the keywords “Okay Google”.

Usually, when you set up the device it will ask you if you would like to use it if you missed it or did not here’s how you can activate it. Head to Settings > Languages, Input & Gestures > Advanced > Gestures and flip the switch and set how much pressure is needed to call Google to action.

Change the size of text and icons to display more 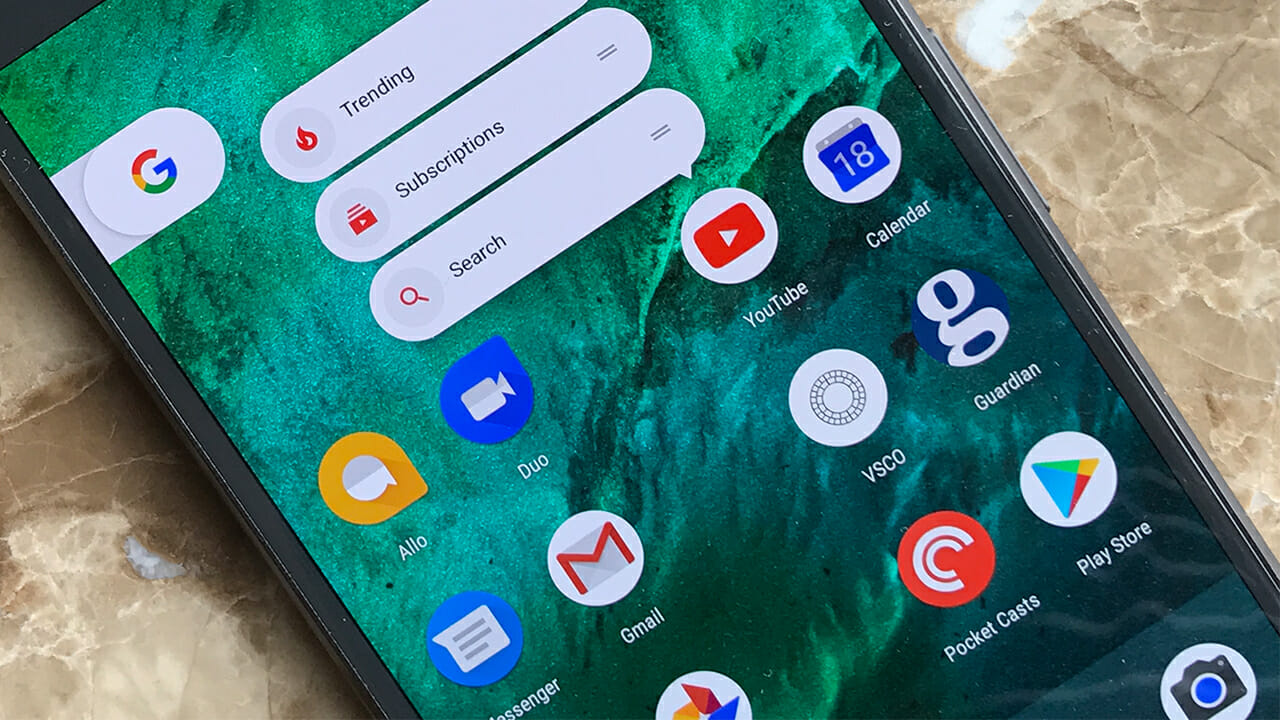 The Pixel 2 XL won’t have this much of an issue and the screen is bigger but out of the box, both phones are set by default to the standard text size and icon size. If you need more help you can increase the size of text size but if you want a little more space you can also decrease the size of things.

Go to Settings > Display > Advanced > Display Size and you can raise and lower the slider to affect the preview and set what you believe looks best. Hit the back button to save your changes and you can always change it back if you don’t like it.

See your Calendar Appointments at a Glance 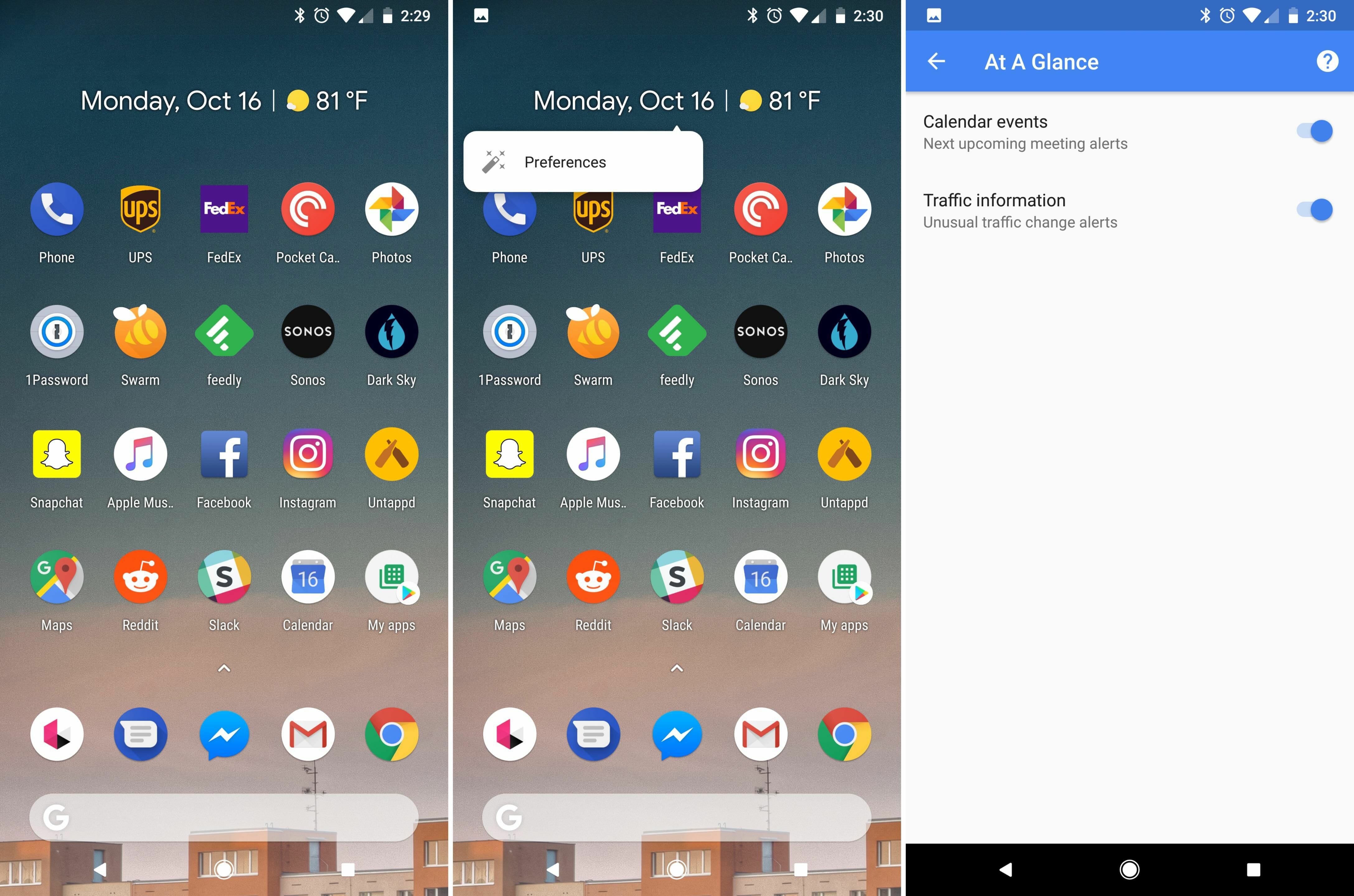 The Pixel 2 and Pixel 2 XL use the unaltered Android Oreo 8.0 but Google being the masters of Android, have included some features you won’t find on any other device. One of those will allow you to activate the “At a Glance Widget”

At a Glace is able to search your inbox and calendar to show you appointments, flights and the sorts of things you find in the Google Launcher by swiper left on the home screen. If you don’t want Google knowing this information you can, of course, switch it off but they know everything about you already so why bother.

When on the Home Screen, hold your finger on the screen for a long press and select Home Settings, then to At a Glance and toggle it on or off depending on your preference.

Turn Notifications Dots On and Off 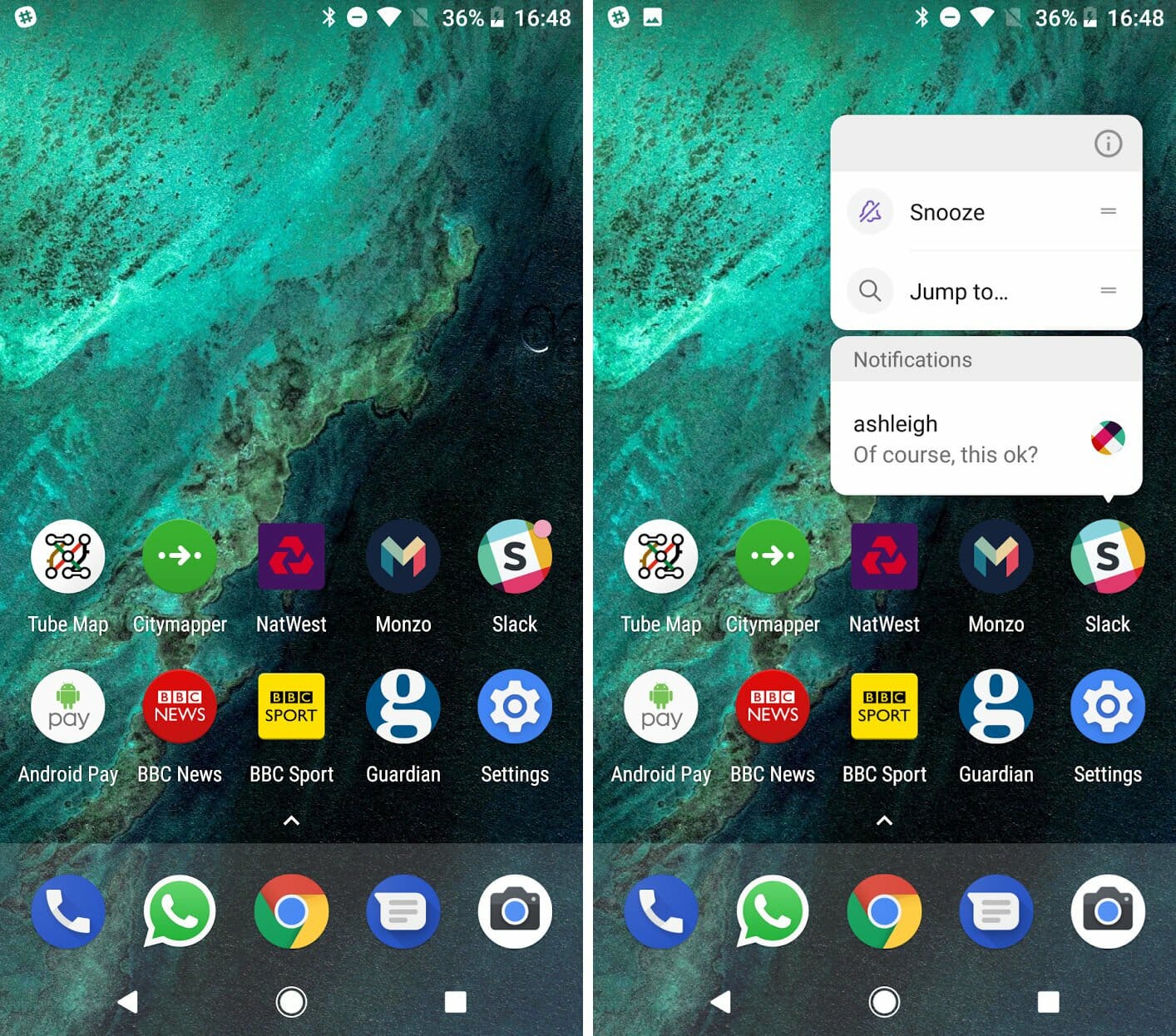 A feature that has made its way to just the Pixel 2 and Pixel 2 XL, in the beginning, is the notification dots that let you know when something knew has pop up in your favourite app it wants you to know about. Dots are usually the same colour as the app and will appear on the righthand side of it.

If you have apps in folders it will display as a white dot on the folder when one of the apps within have a notification dot. To turn them on and off you need to head to Home Settings > Notification Dots and toggle off or on “Allow notification dots”.