Designing a game is a lot of work, this is a fact. Even the simplest of games have a fair about of design put into them, so you can imagine the scale of how much work there is put into AAA games. You are not even safe after your game is completed; patches, updates and DLC are everywhere these days, which means more work, more time and more problems. Games genres like MOBA’s are notorious for this; characters in these games are always being added and changed. Of course, over time, characters will need to be reworked and none needed a do over like Murky did.

For those of you who may not know a lot about Heroes of the Storm, Blizzards answer to League of Legends, the core attraction of the game is that it is a MOBA which draws from Blizzards intellectual properties for the Heroes they include in the game. This also applies for the lore if you are into that sort of thing. Of course, one of these properties is the ever present MMO World of Warcraft and this is where Murky comes into things. 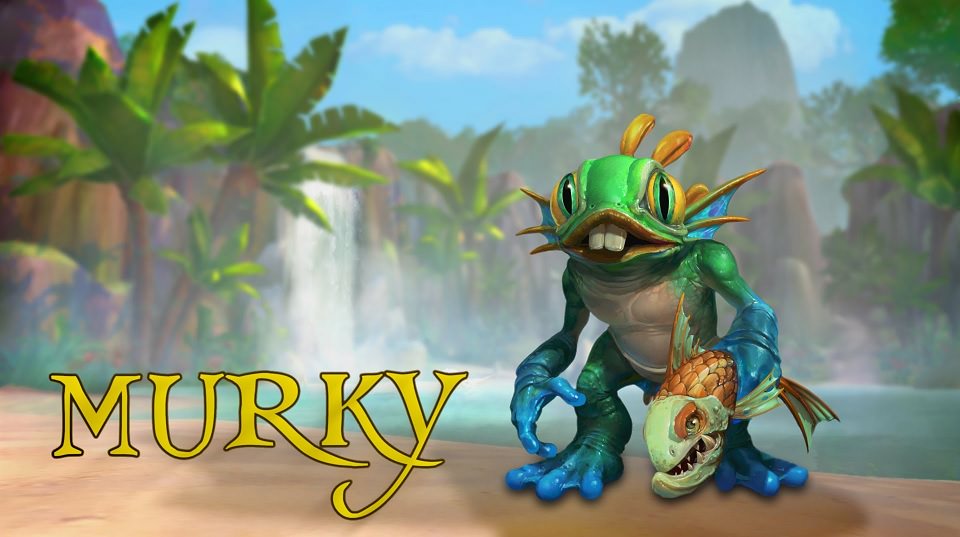 "Murky is the main reason I started playing Heroes of the Storm..."

Murky is baby Murloc, a fish like creature from all over the World of Warcraft. Thanks to, in part, Blizzard themselves, Murlocs became the pseudo mascots of WoW and jokes or even memes about them have been around the beginning of the dominate MMO. It made sense then that at least one of the critters would make their way into Heroes of the Storm.

A slight aside, Murky is the main reason I started playing Heroes of the Storm. His design, playstyle, mascot status and just general look being out of place in a game like this makes me laugh every time I play him. How can you not laugh when you grab a hold of Diablo, the Lord of Terror, and beat him to death with a SHARK.

Murky is unique hero; thanks to his trait, he can place an egg down anywhere on the map and then when/if he dies, he will respawn at the eggs location in just 5 seconds. The downside to this is that his health pool is a ¼ of other heroes and so is his exp for being killed. This makes Murky inherently an harass character; spawn from your egg, attack enemies and just be a nuisance to your foes, die and then repeat the process over again. 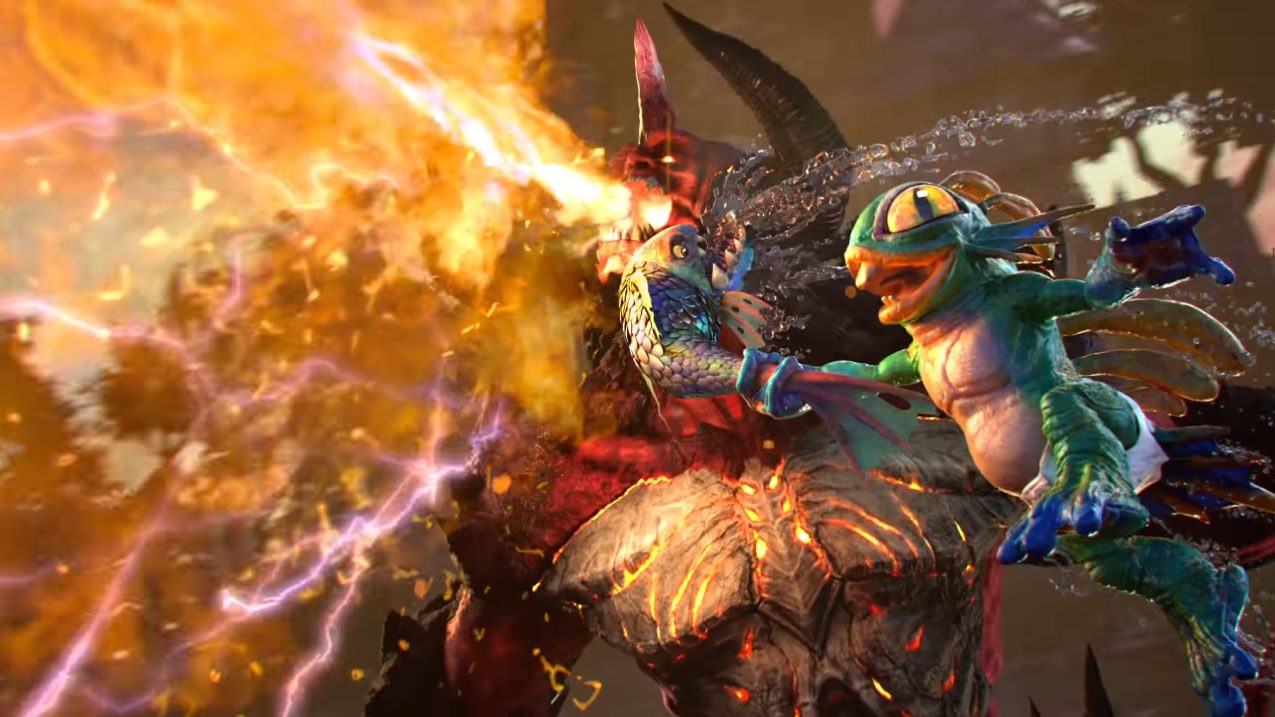 "...you grab a hold of Diablo, the Lord of Terror, and beat him to death with a SHARK."

Being annoying in a game can drive players to distraction. We’ve all been there, playing a game we enjoy but just being bugged by small things which eventually either put us on the back foot mentally, being on tilt so to speak, or we just stop playing overall. This is why Murky’s design shined; he was supposed to do this. Murky was not going to be winning any large fights or making strong plays by himself, he was created to annoy and that’s what he did. Rarely will you see games create features which set out to disrupt player experience. This is due to the very real fear that you will turn players away from your game out of frustration or cause negative feedback, but when it is done well it can be rewarding from both sides of fence.

On the one hand, players rejoice when using Murky to make some silly play or irritate. On the other, players will feel a sizable satisfaction when dealing with the Murky player or making his life hard in return; it was a nice balance. However, as mentioned, games change and grow over time and none do this more than MOBA’s. After every new character’s addition, Murky steadily became less and less annoying. In fact, after a while, Murky became a joke. He was unable to even function; stealth characters would dispatch him with laughable ease, highly offensive characters killed him in a split second (some even could farm him for buffs!) and healers and tanks started to gain abilities to reduce Murky’s effect on them.

This is where Murky’s design failed. By bending the established structure of character design in Heroes of the Storm, they created an interesting character which was placed outside the realms of gameplay norms. Unless monitored, this position could easily become a problem and, perhaps inevitably, it did.

The question then becomes, how do you fix this? Murky was a Hero categories by his ability to annoy and to die a lot; two things that Blizzard could not control. For the longest time, Murky lay in a MODA limbo, unable to be used realistically and for his original purpose. That is until November of 2016. Blizzard announced that Murky was receiving a rework and it would be released in the new year. This caused some concern, both sides of the camp were dreading what was to come. 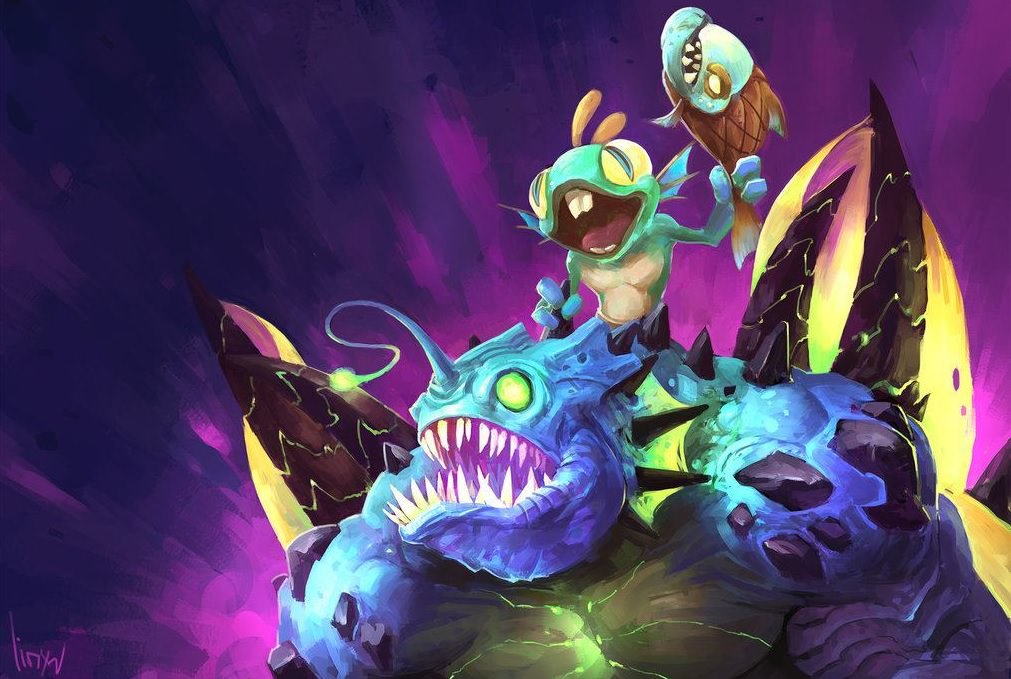 "Murky’s core design, which not only bent the rules of traditional character creation but also design methodology, has remained steadfast..."

But as it turns out, that concern was misplaced. Say what you want about Blizzard but this rework did not only keep the spirit of Murky, but made him usable in the current meta. To begin, Murky’s egg has been given more properties depending on what skills you pick. You can put decoy eggs down or give them the ability to detect stealth enemies. This gives you a chance to strike back against heroes who normally counter Murky but, even with these new talents, good players can still circumvent them.

The same way of thinking has been used on Murkys Slime attack; it can now be used more often and in new ways such as being applied on physical attack. This makes Murky just strong enough to be considered a problem when he is around but not enough for him to warrant being focused down, exactly what we was initially conceived to be. His area of effect damaging pufferfish is like this as well. With heath instead of attack hits, enemies need to consider their positioning a lot more while engaging a Murky and, since the fish can now be targeted and killed by forts, Murky has another way to harass structures.

So far then we can see that Murky’s core design, which not only bent the rules of traditional character creation but also design methodology, has remained steadfast despite two years of changes and a rework. Perhaps where this is evident the most is in his ultimate attacks, Octo-Grab and March of the Murlocs. 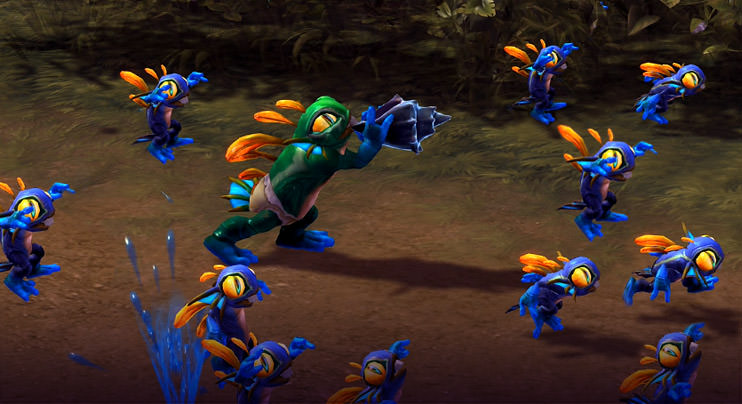 "Octo-Grab is still a fine pick, but the new level 20 version of March of the Murlocs trumps it in cuteness and potential damage output..."

Before the rework, few would have suggested picking March of the Murlocs. Octo-Grab had, and still does, one of the highest stun times in the game at 3 seconds and when combined with the pufferfish and the level 20 version of the move (Murky hits them with a SHARK while the enemy is stunned!), the baby Murloc can push out a lot of burst damage. March of the Murlocs, while good at area denial, could not compare to this until now. Octo-Grab is still a fine pick, but the new level 20 version of March of the Murlocs trumps it in cuteness and potential damage output. The attack can now be channelled and lasts indefinitely, this means as long as Murky remains still and uninterrupted, the March can continue doing damage. I don’t have to tell you how crazy this can be if used correctly!

So, what can we draw from this then? A few things. Firstly, testing the limits of games is to be encouraged. More titles should try to add awkward characters or strange abilities which test the boundaries of their games constraints. It can lead to new concepts which can enrich your game overall. Also, keeping the “Soul” of a product is more important than you think. We all joke when developers use this phrase but it carries so much weight; it can ruin games if this get messed with too much. Finally, respecting design is key. Reworking anything comes with a risk of power creep or even under powered ideas. This can be avoided if you keep in mind the goals and outcomes of the original creation, something followed here.

I highly suggest checking out Heroes of the Storm if you fancy a MOBA with a faster pace than others and if you are fan of Blizzard in any way. It may just surprise you with how fun it can be. Also, it has Murky! What more could you want?

Filed under: Blizzard Heroes of the Storm HotS Murky