A couple of weeks ago, I had the opportunity to go to EGX Rezzed, a convention primarily for fledgling studios to show off new indie titles to the general public. Here is a rundown of some of the most interesting games I saw at the show:

Overruled was the first game I played at the show and, like many other games on this list, it showed the push by many of the indie studios to bring back the almost forgotten fun of local multiplayer. Overruled is a hybrid of Super Smash Brothers, Uno and WarioWare with players gathering points by completing various objectives in a set time limit.

The twist is that the objectives can be changed by any of the players at any time by playing a rule card, which randomly spawn throughout the stage. These cards can increase the amount of points you gain from completing an objective, change the objective from something like King of the Hill to coin collection or even increasing the respawn timer, making you wait up to 10 seconds to get back into the game if you’ve been knocked out.

You can block other players’ cards, instantly play a card as soon as you get one or save up your cards until you have the best combo to surge into the lead. Even though the game was only in very early alpha, with limited art assets and only one stage, it was great fun to play and brought back the spirit of ‘on the couch’ multiplayer, as shown by the sheer amount of shouting during my time playing. Look out for Overruled on Steam Early Access in May.

Tiny Keep is a dungeon-crawling roguelike game, which tasks the player with escaping from a mysterious keep whilst being attacked from every angle by enemies, traps and procedurally-generated events. The game uses randomly-generated dungeons, similar to games like The Binding of Isaac, with no run ever being the same with enemy and weapon placement differing from game to game.

One major difference that Tiny Keep has is its smart AI system, which actively seeks out the player, ganging up on you to trap you in corners, attacking other enemies if provoked and running away if you are too strong. This, along with the devious traps within the game and the random dungeon events like a horde of skeletons invading and causing a battle with the human jailers makes Tiny Keep not only feel incredibly frantic, but really damn difficult. I think less than 7 people completely the game during the whole convention. Tiny Keep is expected to be released in September on Steam.

This game was right next to Tiny Keep at EGX Rezzed and I had to see what all the laughter and crowds were about. Gang Beasts, like Overruled!, is a local multiplayer party game where you play as a floppy-looking monster, trying to punch, pull and throw your enemies to their doom in a variety of different arenas. The physics of the game make Gang Beasts feel like an old brawler like Streets of Rage mixed with QWOP and Sumotori Dreams, to create this bombastic mess of limbs and stage hazards.

Much laughter came from the crowd as one match involved two players ragdolling into an incinerator as two others had a punch up on a conveyor belt whilst boxes bounced off their heads. For sheer silly fun, Gang Beasts was my game of the show and the pre-alpha can be downloaded now from their IndieDB page, with a Steam release planned for later in the year. 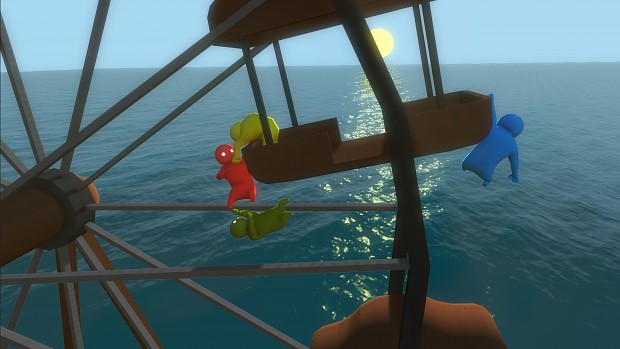 This gravity-based puzzle game really caught my eye, not only due to the starkness of the level art but due to the custom Arduino-based controller which was being used to play it, which allowed you to push and rotate a spherical handle in order to control the game. Unfortunately, this was only for show, with the game usually being played with a standard mouse.

The goal of 0rbitalis is to launch a probe into the orbit of a one or a group of celestial bodies and see how long it can stay in orbit before it crashes or is flung off into the depths of space. You can control the force at which you launch the probe and the direction, with the game showing you its path just before you launch, allowing you to gauge your trajectory and see where the best path is.

The levels start off very simple with you orbiting single stars or planets to get used to the controls before having to negotiate asteroid fields, nebulae, pulsars and all matters of celestial objects, ramping up the difficulty more and more. Luckily, you can instantly restart if your probe crashes and you soon adapt to the orbits of each level and find out which is the best strategy in order to make your probe survive. 0rbitalis is scheduled for release on Steam Early Access on the 16th of April.

This minimalist stealth game involves you playing a square, who wakes up one day with no clue where or who he is, and must find out what on earth is going on by sneaking through a variety of levels, avoiding guards, hacking computers and uncovering a complex story. What is really striking about Light is the light mechanic, which allows you to let in or shut off light sources. Characters block and react to light sources, allowing you to hide in the shadows or be spotted by a shaft of light coming from a doorway.

Like 0rbitalis, the minimalist art style is really effective, with all characters being represented as different coloured squares and its focus on non-lethal tactics, with the game penalising you heavily for killing guards, making this one to look out for if you need a stealth game fix. Unlike many of the games on this list, Light will not be on Steam Early Access and will be released in full later this year.

Flockers can be seen as the spiritual successor to Lemmings in many ways, taking cues from the influential puzzle game whilst adding its own twist and a lot more gore. The game features the infamous Sheep from Worms, who are fed up with being used as weapons and decide to break out from the Worms’ weapon factory in order to gain their freedom. While the game is a new IP, there are many inspirations from the Worms franchise in game like the sheep being able to turn into Super Sheep by picking up familiar weapons crates to leap tall obstacles, whilst Worms with hardhats are also being seen working in the background.

Flockers is equally as devilish as Lemmings, with devious traps causing your sheep to be killed by giant spinning buzzsaws or crushed by pneumatic presses, leading to many players’ shouting in frustration during play. The game also promises a level editor, allowing players to create their own gauntlets for people to shepherd through as well as leaderboards for completion times and so on. Expect Flockers on Steam Early Access later this year.

It was good to see such a variety of indies of such a high quality, even when most of the games are still in alpha or even pre-alpha. Keep your Steam Wallets topped up and your eyes peeled for these releases in the near future.