Outside of the big franchise racers like Mario Kart and Sega All Stars Racing, it’s very rare that you will see a kart racer that does not have a licensed character slapped on the front to sell units. This is even the case in the indie sphere, where games like Super Indie Kart will bank on the success of smaller franchises to shift units. Gambling on a new IP and on its visual teaching tools to introduce a player to its ursine racers, Bears Can’t Drift!? attempts to carve its own little niche in the arcade racing genre, by combining mechanics from other racers like Diddy Kong and Crash Team Racing with absolutely no menus and attempting to explain the game purely through its visuals.

Talking to lead designer and artist Arran Langmead, Bears Can’t Drift!? is designed to be open to as many players as possible, with his decision to scrap menus and text (besides a hidden credits area) to bypass any localisation problems and to be open to anyone regardless of reading level. There is no opening race where you have your hand held and you are told all of the buttons, you are dropped into a hub world upon starting and allowed to muck around with the controls until you feel ready to enter a race. If you are playing Bears Can Drift!?, there is the assumption that you know enough about games and kart racers that you can hazard a guess that the right trigger accelerates while the left trigger brakes and so a patronising tutorial is not needed on booting up the game. The open hub takes the place of the tutorial, allowing players to drive around, pick up some of the game’s items and test out what they do before going into a race. According to tests done with groups of kids both on the show floor and in focus groups, players have apparently spent more time just driving around the hub, firing items off randomly at each other than necessarily doing structured races. Having this free play option available from the start in 4 player gives you the opportunity to make your own little minigames with friends. It’s very much like the testing area in Banjo Kazooie: Nuts and Bolts, where players (myself included) would have more fun just trying out new vehicles and enjoying the act of free play, rather than being shunted into a race and having that be the only way to play.

While this openness and lack of structure may come as a great delight to some, I feel that it does reach into being way too open that some players will be turned off. Bears Can’t Drift!? does invite you to experiment with the controls yourself but it does not deal with the issue that actually accessing races and different modes is quite obtuse. When playing alone, you have two coloured flags attached to your kart which determine what game mode you will play through when you drive through a track portal. If you don’t notice that these flags aren’t just part of the kart design, you’ll quite quickly forget they are there and be always stuck playing Single Races when you want to play Time Trials and so on. It isn’t clear what the items do either as unlike Mario Kart where all the items adhere to a pre-established game iconography which players can make sense of, all of Bears Can Drift!?’s items don’t have a use that is readily available from a glance. Again, they start to make sense after a few races but I was still confused as to how a salmon and a bee combined to form a brand new weapon. Again, this idea of weapon stacking is similar to Diddy Kong Racing’s balloons but there, the logic of stacking multiple red balloons on top of each other to make a more powerful rocket made sense straight away. I feel that in trying to balance the game’s cutesy animal aesthetic with teaching iconography, Bears Can’t Drift!? will alienate players who just want to jump straight into a kart racer precisely because mechanics have to be figured out before the proper racing can start. 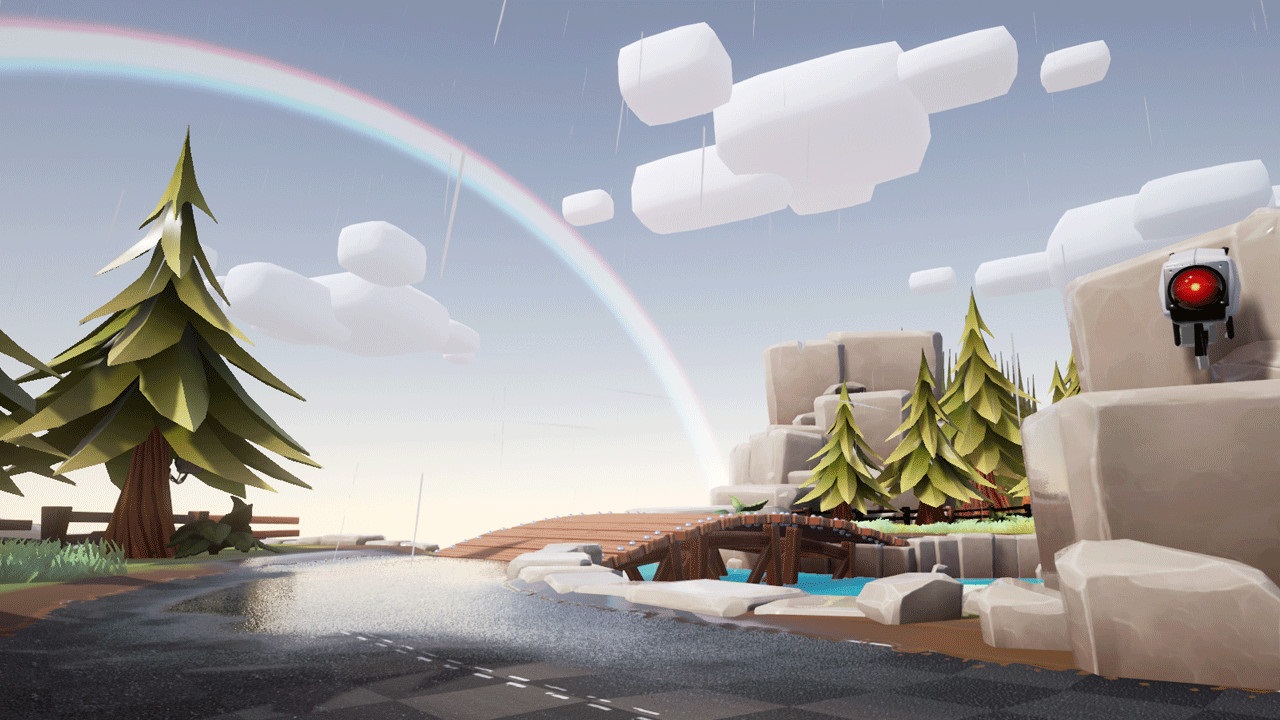 All the locales are suitably idyllic and child friendly. You won’t see the bears racing around Hell.

As for the racing itself, it leans more towards Crash Team Racing than it does Mario Kart, emphasising long drifts where long camera pans to show just how far you are sliding. The drifting rewards players for holding one for a long time, with you getting a gradual speed boost depending on the length of your drift, rather than getting a longer mini boost whenever you exit out of the drift. It is all serviceable but there were still problems with collisions and I didn’t get any real sense of speed, partially because I zoomed past most of the AI racers without them really challenging me with items or superior racing ability. From the few tracks I played in the demo, the tracks did allow for shortcuts and optimised drifting paths but they just lacked any real charm. There were none of the little visual extras like the Toads waving in the crowd of the race track or track gimmicks to add that extra jolt of personality to Bears Can’t Drift!?. It does not help that I could only play the demo unit in 4 player mode so I couldn’t really explore the hub world in any detail but I feel without some initial cool race track or character to really hook players into Bears Can’t Drift!?, potential players will just bounce straight off it.

This issues stems to the titular bears as well, where there isn’t much visual difference between each racer besides a panda bear, a polar bear, a skeleton bear and maybe a robo bear. All the bear variations are unlocked from the beginning and have no gameplay difference, so your decision is purely aesthetic. Like with most of the decisions Arran has made with Bears, I fully understand the decision for accessibility reasons, as it makes it so there is no optimal character for specific events but I also miss the different abilities and attributes of specific racers that do make picking characters a tactical decision when playing a kart racer. You can collect hidden hats which are placed around each of the game’s 12 tracks but these add no bonuses to your bear, besides being able to cut around a forest wearing a deerstalker.

For me, Bears Can’t Drift!? acts as an interesting experiment in kart racing design, but one that won’t necessarily result in the most enjoyable of racers. It is a game composed entirely in Unreal 4’s Blueprint system which requires no previous coding knowledge which is a feat in itself, but it is at the cost of extra features like an online mode which seems almost vital for a kart racer nowadays on launch. Its attempt at conveying mechanics purely through visual cues is valiant, especially when Bears Can’t Drift!? is mainly aimed at children but it does cause elements to become lost in translation from Bears’ idiosyncratic visual style to actual mechanic. By Arran’s own admission, it’s also an example of where the Early Access model does not necessarily work, as unlike Nuclear Throne or Prison Architect that benefits from constant incremental updates that builds upon a core foundation, you can only really add a new track as new content to a kart racer once you’ve established the basic racing controls. As soon as we have the final version of Bears Can’t Drift!?, we will do a full review and see if players should go down to the woods for a spot of kart racing.