VGU were at the biggest UK consumer games event, EGX 2015. At this year’s event we sat down with Sony to try the PlayStation VR, their entry into the virtual reality market.

From fist glance the PlayStation VR stands out from the rest of its competition, it has a sleek, curved white finish which is surrounded by a number of blue lights which gives it a very cool Sci-fi vibe. By picking up the headset you can feel how light it is, made from mostly padding and rubber it was the lightest VR headset I have tried so far. This is further backed up by the way the headset is designed.

Due to the ring formation of the headband a lot of the weight is distributed towards the back of the PlayStation VR which meant that the front becomes much lighter taking the strain of the screen and your face. The padding around the screen area which sits around your nose and face is soft and with the ability to change how far forward or backwards the screen can come in line with the headband/support by pressing a button underneath enables you to get a much better fit for your face.

Much like the screen, the back of the headset is also adjustable with a circular notch that clicks into place each step, tightening the headset from the back. It does have a problem with sizing, if you have a smaller head or a child it may not fit as well than it does on an adult. Even with clicking it into place as far forward from the front and back, our guest Laputyn who also tried it could not get it to sit perfectly, leaving a gap underneath the headset by the screen as well as a slipping feeling. 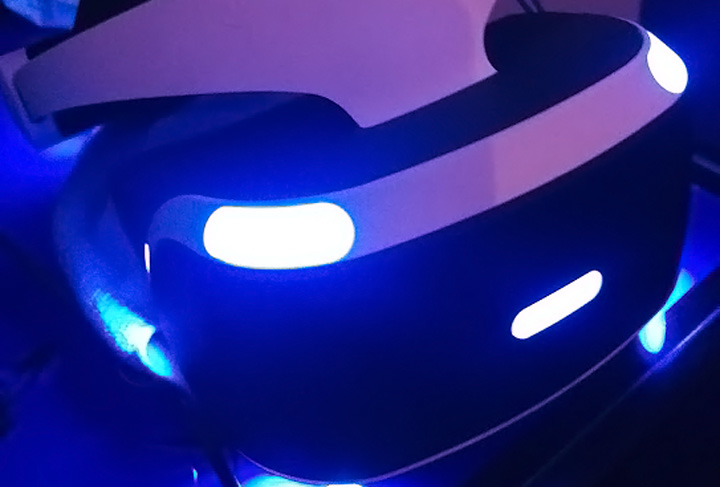 The games that we tried were Valkyrie VR, which was something I had tried a couple years ago on the Oculus VR at gamescom. Playing it again was a great way to compare the two headsets, the Oculus at the time was very clear and comparing it to the PlayStation VR it was still a little better. A little fuziness was the downside of the PlayStation VR, the images did not have the HD look to them which could be the set up of the headset on my head, the dev kit or the demo. Whatever the reason, I hope this is something they make sure is “fixed” when they bring it to the consumer version.

The Kitchen was the next demo we looked at, only being a tech demo there was no actual gameplay but it was a impressive and scary, to show of what the PlayStation VR could do. Sitting in the chair at EGX, you also find yourself in a chair, bounded in a kitchen. Supernatural, creepy things start to unfold, all the while you are stuck in one place only being able to move your head around to see what is going on both visually and through the very well constructed surround sound. Holding the controlling is a great immersive mechanism which gives you the feeling of being tied by the hands and the demo brilliantly shows of the accurate and natural movement of the the PlayStation VR. We were told grown men, came out The Kitchen demo screaming, but long standing horror fan and our guest Laputyn, did not show much not even a nervous tick. After the demo however, she did mention how amazing it was and for a non-horror gamer could see it being utterly terrifying.

As with a lot of products in the development stages, cabling is a problem. The PlayStation VR had quite a few cables which were prone to tangling round each other, the headset and the controller. When bringing it to market, it will be interesting to see how Sony can deal with creating a product that easily handles all the different cables you are going to be using for your different peripherals, without the feeling that you are getting wrapped up in them, or being weigh down by them.

The PlayStation VR is looking like a killer competitor for the Oculus and being designed by Sony it is shaping up to be a great companion for the PlayStation 4. There is work needed on the sizing through the way it sits on your head, which could be the reason for the fuzziness/focusing problems. Regardless of the smaller issues which can be ironed out over its development cycle, the PlayStation VR is a great addition to the virtual reality circuit and at EGX 2015 all we heard were positive comments from other gamers. We are looking forward to seeing more about the PlayStation VR and what they can do with it in terms of games.