I think I’m not the only one who raised their eyebrows when ARMS was shown off in the Nintendo Switch direct. In concept, it looked interesting enough; a cute almost Splatoon like aesthetic mixed with Wii Boxing. But as every fighting game player will tell you, it rarely matters how it looks, it’s how it plays that makes it worthwhile. This obviously got a lot of discussion going, the main one being just how good could this game be with the motion controls?

As I faced my opponent and strapped the Joycons to both my hands I mused the same thing. You control your character by tilting your hands in specific directions i.e. both left to move left, both inward to block etc and then punched like normal to fight. You can tilt the controller(s) to direct and angle your punches, which gave the game a lot more depth then you would believe it could have, and allowed for some cool looking combos.

Like most fighters, ARMS follows a triangular based system of combat, punching beats out a grab attempt, grabs get past blocks and blocking cancels out incoming punches. It’s nothing we haven’t seen before; even the super moves you can unleash in flurry of punches makes the whole experience eerily reminiscent of Pokken Fighters. Though ARMS does not have as much going on as Pokken does, the use of the motion controls as the main method of combat give it the means to stand out. 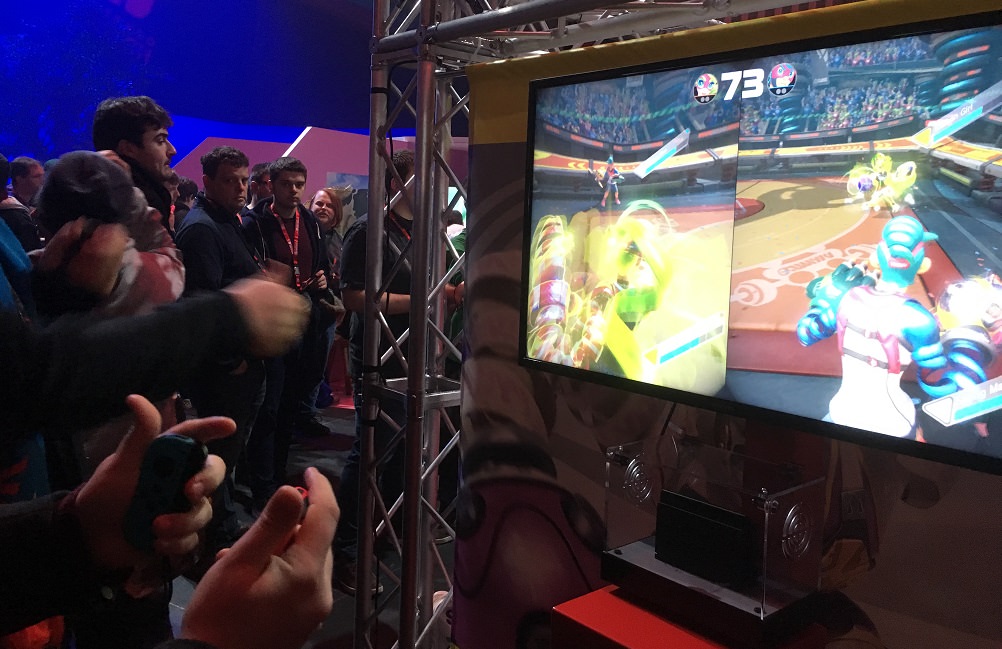 "...it's a fun little title that has the potential to be pretty interesting competitive game in its own right."

The motion controls were (when calibrated correctly) extremely responsive and lead to some crazy looking and hectic fights. The subtle movements combined with the over the top attacks made the game fun to play and would be a great time over a small session (less than an hour). However, this is where the cracks started to show. After jumping on for the third time, I began to notice the dominate strategies that were present. The ninja character seemed to be the standout choice thanks to his intangible teleport ability and the multi-hitting glove that you could use reigned supreme thanks to the lack of hitstun.

Really ARMS’s biggest issue isn’t the game itself; it’s a fun little title that has the potential to be a pretty interesting competitive game in its own right. The complete package is the problem; the game seems a bit simplistic and unintuitive for something that will cost full retail price on when it is released. Also, then being told that you could play the game with the pro controller, thus leading to the realisation that if the game ever did go the eSports route it will probably be the preferred option, gives ARMS more expense added on to it when compared to the average Switch game. I had fun with ARMS and a lot of others did as well, but I only hope the full game has more meat on its bones, otherwise it may just not worth it as a full price title for the Switch.