Mech combat is usually the realm of the action game, with franchises like Armoured Core and MechWarrior having you stomp around a battlefield in real time, firing off salvos from oversized missile batteries in the remains of some future tech city. Very rarely, besides the criminally forgotten Front Mission franchise, has mech combat been done via the strategy RPG or been placed outside of the usual futurist setting of neon lit cities and blasted battlefields. Acaratus seeks the more strategic route, taking mechanised warfare and bringing it to a steampunk setting, where steam powered warriors do battle with swords, catapults and great mauls. While the setting and the combat have a lot of promise, Acaratus needs a lot more time in the workshop before it does well in a brawl.

At this point in time, Acaratus just has its skirmish mode and the absolute briefest of campaign previews. I timed myself and I completed the whole of slice of the campaign in under 5 minutes and then you only have randomly generated skirmishes to keep you going. In that time, you get the smallest whiff of a story, a short explanation of the menu system and 3 battles to fight. There is no real tutorial on how combat works, even a hint of what makes a good mech before you are booted onto the blandest of world maps where you zip around a randomly generated maze, finding bits of treasure, mech parts and battle cards on your way to the 3 skirmishes you can finish in the blink of an eye. I understand that this is Early Access but come on, you’d feel underwhelmed if you got that in a free demo, let alone something you paid money for. While the developers Nodbrim had made it clear that if you do buy Acaratus now, you are buying into an ‘early beta in the rawest form’, I still don’t think that is an excuse for selling it on Steam in its current state. When other Early Access games like Darkest Dungeon or Prison Architect which had plenty of things to do even during their initial beta launches, releasing what is a glorified demo at this point and charging £18 is taking the proverbial.

Now, I could give it a pass if the core combat and mech building was solid but it feels so insubstantial that you won’t even want to play the Skirmish mode for that long. When you boot up Acaratus and go into Skirmish, you are prompted to make a mech team from the sample parts provided. The actual process of building is simple enough, you pick a core which determines some base stats like damage taken and overall health before bolting more bits on top of that. Some cores allow for specific parts, like space for a faceplate or even a propeller to have your war machine float over the battlefield. There is plenty of room for customisation and creativity but due to the current cluttered interface of the mech builder, I couldn’t see some of the stats of specific parts. A prompt that tells you to check the Acaratus site for tips actually covers the pop up which tells you the specific bonuses of some parts, making it a guessing game as to what that new horn or gearbox actually does. You can tell certain cores will make for specific mech archetypes like the Boscus Core making for powerful melee units while the Northerner Core is perfect for tanky mechs that can aggro enemy frontliners. I can tell when the mech builder is fleshed out and you gather a suitable stock of parts, you’ll have great fun creating the ultimate metal warband but at this early stage and without real guidance, building mechs feels like slapping random parts together and seeing if it works. 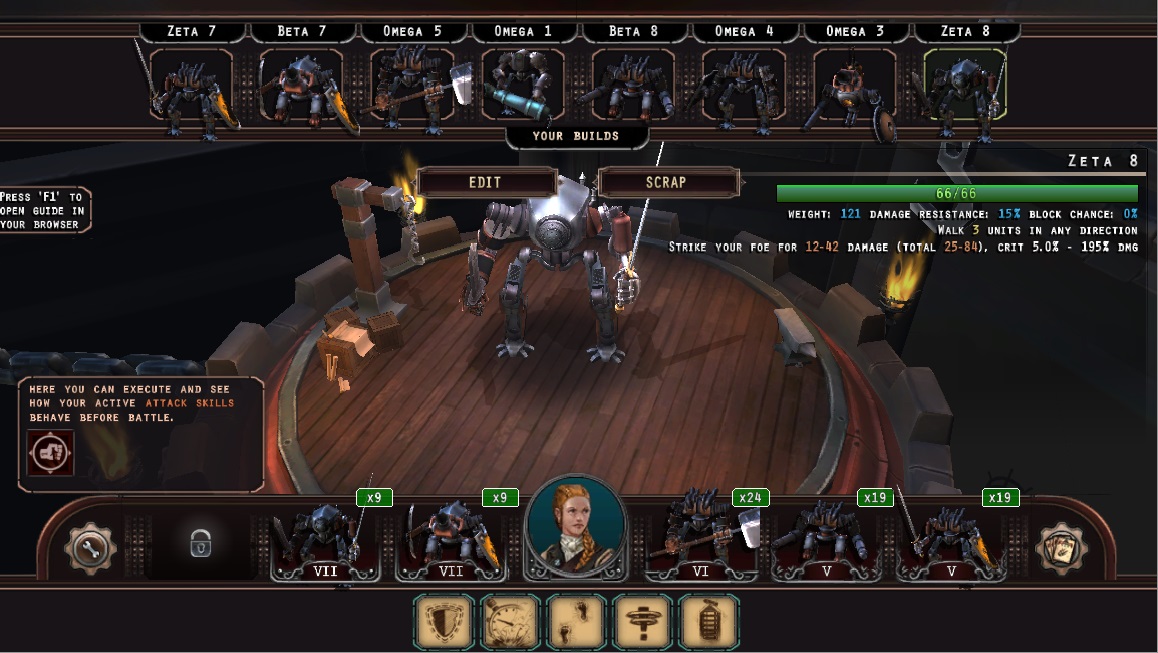 Mechs feel like they’re made of tinfoil and toothpicks, rather than hardened steel.

On top of building your mech team, you have to pick a squad leader which will determine your squad size as well as the battle cards you can use in a fight. At the moment, there are only three Commander types with Knight, Scout and Pawn. Scouts have have increased movement range and the ability to move and attack, but their squads are quite small. Knights have a larger squad size and more damage resistance but their units cannot move as far. Pawns have no special bonuses but they also have no drawbacks so they are the best for testing out general squad compositions. I like this system in theory as it forces you to build a team around a handicap but the penalties of specific Commanders seem too minimal at this point, with all them being fundamentally the same. If picking a certain Commander gave you access to certain battle cards, I think this would make picking a Commander more important and actually feel like a conscious decision, rather than just an afterthought made once you’ve built your squad. The battle cards take the place of skills that specialist units would have in a game like XCOM, allowing players to use any card on any unit they want and even stack abilities on one unit that is in trouble. Current cards are typical ones like Overwatch which has a unit fire upon an enemy when they get within a certain range or Haste, which ups a unit’s movement range for one turn but you also have some unique ones like Powerstep, which has a mech repeat their previous movement action to cover more ground in a single turn. All these cards are tied to a Command Point meter which fills each turn and stops players from just overloading a single unit on turn one with loads of abilities and have them clean house. Honestly, I’m not a huge fan of the battle card system at present as it takes away from the utility and personality of each unit, as they never elevate past being tin soldiers which have powers simply slapped on them mid skirmish, rather than purpose built machines with dedicated roles and skills. If the battle cards were tied to your Commander type and had more drastic abilities like overclocking the cores of each of your mechs to do more damage at the cost of health if you play the Knight, or cloaking each unit if you are a Scout, the cards would feel more like a precious resource to be used to really turn the tide of a tough fight, rather than being momentary bonuses which you just place down out of blind panic.

In its current state, the combat lacks any punch to it, with strikes and explosions lacking proper hit sounds and looking like them simply ping off the surface of each machine, rather than doing a nasty dent. Seeing a mech fire a giant cannon and then having the cannonball spring off the surface of an enemy does not exactly imbue the battle with much drama. It does not help that the animations themselves are rather floaty, which emphasises how your metal soldiers feel more like puppets awkwardly bashing each other with foam weapons rather than war machines beating the crap out of each other with heavy clubs. Acaratus is not particularly clear in showing the attack range of your troops, as it becomes a matter of spot the very small crosshair icon when determining whether you can hit an enemy with a ranged attacker. Just highlighting your attack range in red along with your movement range in green, similar to how they do it in Fire Emblem, would easily get rid of this problem and not make it a struggle to tell if I can hit that enemy hiding behind cover. A lack of clarity is the common problem with Acaratus, as it is equally difficult to determine how much damage your attacks will do to an enemy, due to a combination system of HP damage and Impact damage. Your HP does not usually go higher than around 70, yet your attacks are labelled as doing damage in the hundreds but this turns out to be Impact damage instead of HP damage. Even as I’m explaining this to you, I’m still not sure how it works and there doesn’t seem to be a clear explanation as how Impact damage is converted to HP damage. Again, just a little tooltip clarifying them different would be helpful but probably because the game is only being played among the developers who know how everything works at this point, it doesn’t need explaining.

When you finally wrap your head around combat and you make some cool looking mechs, the current build of Acaratus can be enjoyable but the lack of weighty combat and clarity in its mechanics makes the play experience feel so ephemeral. I don’t feel like I have a clear grasp of how everything works and as a result, I have no real desire to play any further. There are glimmers of a great RPG here and I’m sure when Nodbrim has actually bolted all the parts of its game together, it will rumble into life but coming at it this early in development, you’re just paying for a prototype.