For many people, Bloodborne was their introduction to the sadistic side of gaming that the Souls series offers. The game’s impressive sales far surpassed Sony’s expectations and gave the PlayStation 4 its first real must-have game that has only seen the fan-base grow, arguably the majority of players are hardened Souls veterans like myself  The reality though is that Bloodborne is an entirely different beast to its predecessors, the heightened emphasis on white-knuckle combat and cosmic horror is a far cry from the swords and shields flavour of Dark Souls.
The success of Bloodborne will no doubt push new players to try out Dark Souls III and here’s hoping that it does. However the differences between the two games may not strike the same chord the second time around and developers From Software have shown in the past that they can learn from previous successes to increase their fan-base. So from here I’m presenting you with five things that Dark Souls III could borrow from its mutant offspring that’ll not only ease in new players, but greatly improve its already strong formula. 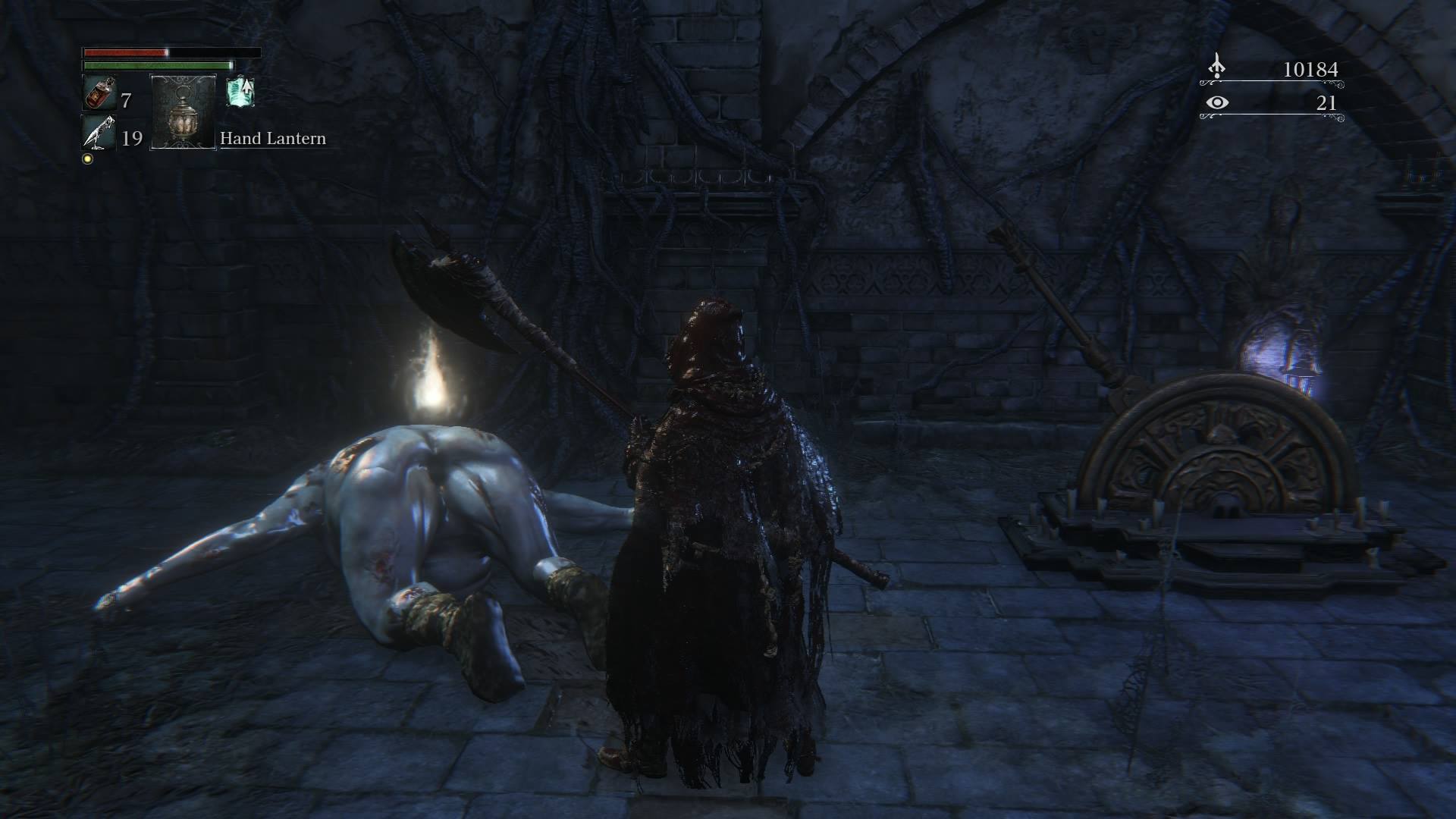 Starting off with a fan-favourite that was sorely missed from Dark Souls II, rag doll physics have proven time and again to be both disturbing and hilarious in equal measure. Their inclusion in the first game seems somewhat out of place, but their absence in the sequel baffled many and still remains a sticking point to some fans.

Thankfully though, Bloodborne knew what we wanted and brought it back, offering brief periods of levity amongst hard slogs in the treacherous streets of Yarhnam. It may seem silly to some, but it’s a fun little addition that adds that extra layer of charm to what is ultimately a very harsh and demanding game. 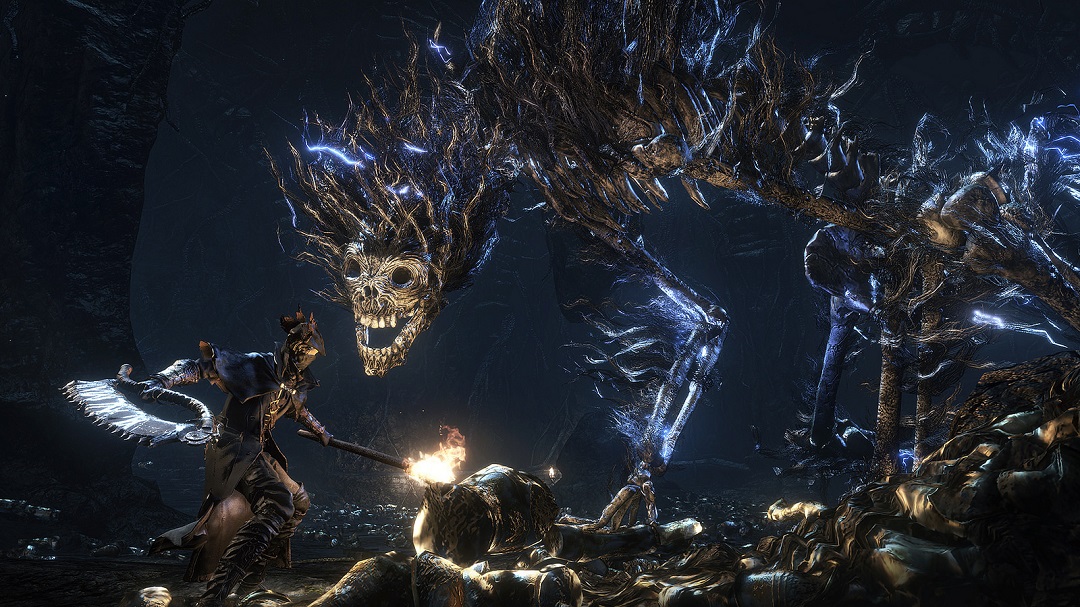 Part of Dark Souls allure is the methodical approach to combat. Seeing an enemy ahead and assessing your situation is always advised and great satisfaction can come from a well-planned attack. Bloodborne simply threw caution to the wind with that idea and threw as many nasty surprises as it could muster up without a second thought.

Sure, some of this was found in Dark Souls, but Bloodborne could be utterly relentless in the amount of ambushes and surprise attacks you could fall prey to. Dark Souls had the gelatinous messes that would fall on a player’s head and the odd skeleton tucked behind some debris. However, they were nothing compared to the legions of werewolves that would crash through doors, or giant spiders that would fall from the ceiling and throw a big hairy spanner in your already fragile works.

The surprise attacks do compliment Bloodborne’s more frantic play style, but they worked on a more visceral level. You never knew when you were truly safe and it gave the game a greater sense of threat and foreboding. Adding in something like this to Dark Souls III would keep the tone grim and push the player’s resolve to much greater limits. 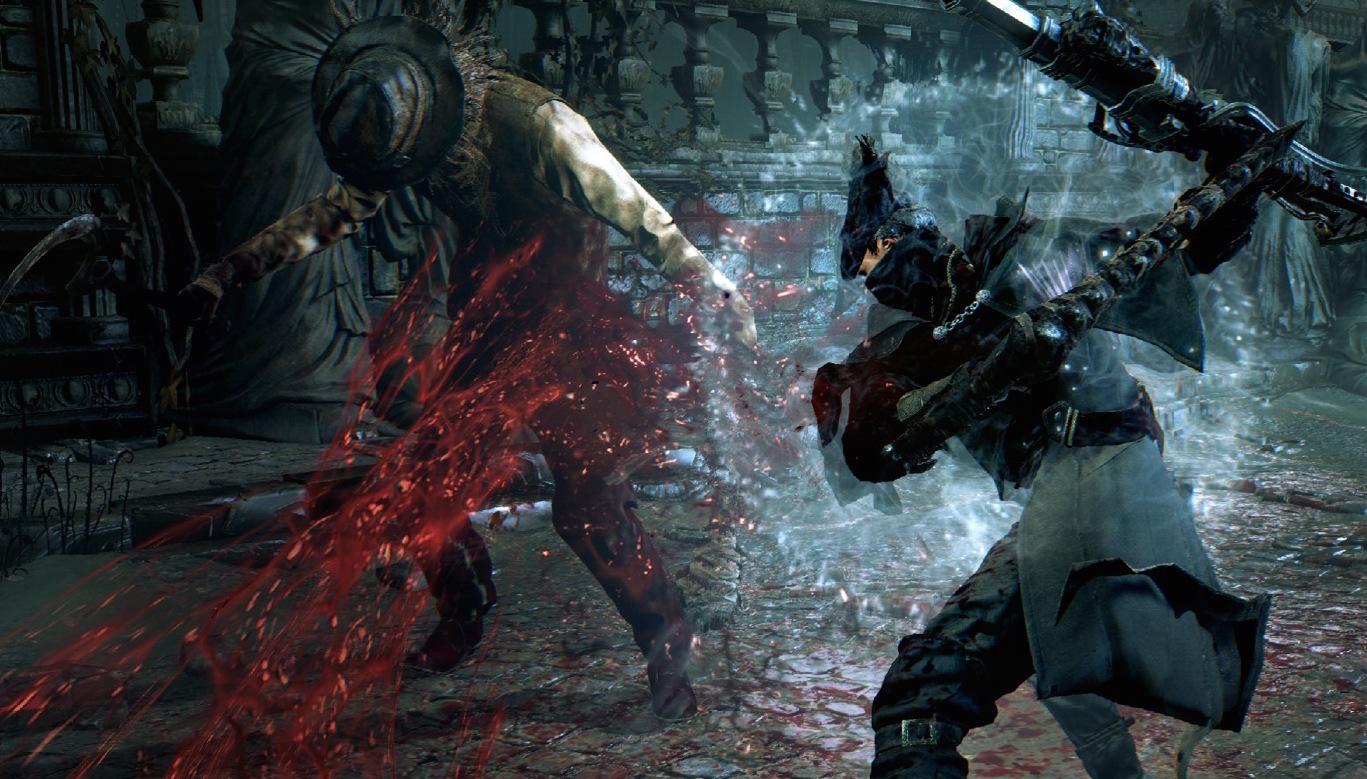 This one may not be to everyone’s tastes as it was more a thematic choice of aesthetic in Bloodborne, but a little bloodshed here and there wouldn’t feel out of place in the cut-throat world of Dark Souls. It doesn’t need to be an excessive amount of blood, but in a game where the combat is primarily handed with sharp objects, you expect a little bit of gore to spatter the walls.

Bloodborne managed to scream next-gen by having blood that obeyed the game’s physics. Dependent on where you slashed an enemy, a jet stream of scarlet would adorn the walls in the corresponding direction. It’s a cool feature, both visually impressive and it makes you feel like the ultimate badass when you stare at the room you’ve just decorated in your foe’s fluids.

Again, not everyone may agree, but a little more emphasis on the violence would be in keeping with the grim atmosphere of Dark Souls and make that mature rating feel a little more deserved

2. Insight (Or a Similar Mechanic) 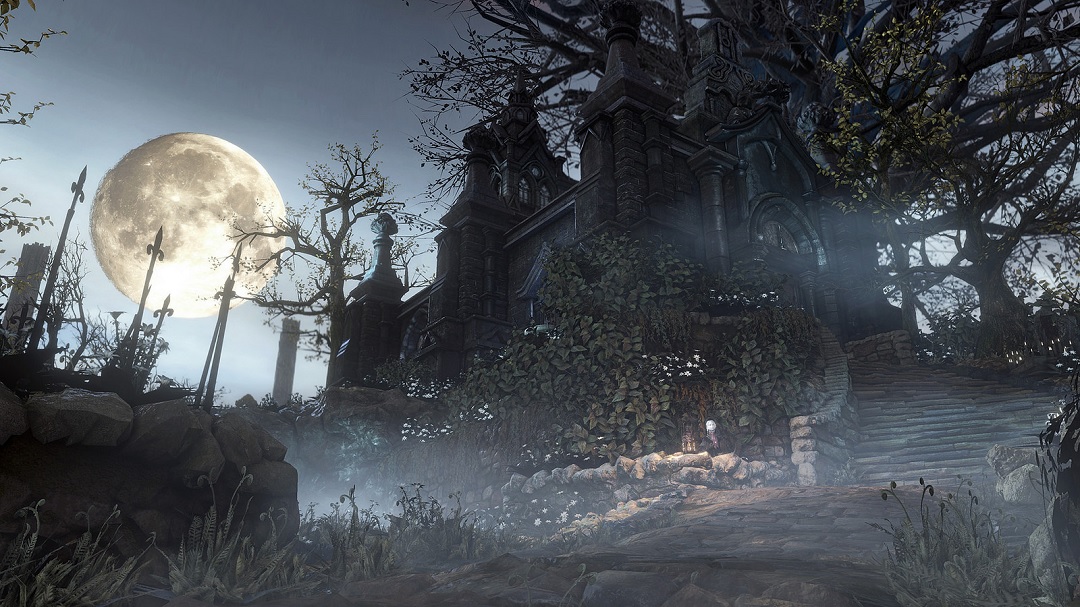 Nothing has been mentioned thus far in terms of Dark Souls III’s new mechanics so I’d like to chime in with this one. Consumables have always been part and parcel of the Souls series but Bloodborne gave us something a little different in the use of Insight.

Earned through discovery and victory, Insight offers the player an alternative form of currency that can be used to purchase arcane items and rare armour. Pretty cool on its own but there is a secondary use to Insight that makes it that much more interesting. The more insight a player collects, the more their character is able to see in the game world. If a player reaches 40 insight before a certain scripted event, they are able to see the Amygdala creatures that cling to the many buildings of Yarhnham. There is no explanation in game as to how this works (Much like everything else in the game) but it provides one of the most frightening moments of recent memory when these eldritch abominations are revealed to you from nowhere.

It’s a simple mechanic that grants you a further understanding of the narrative and encourages players to explore and advance their knowledge of the world. There is a downside though; high levels of Insight weaken a player’s resistance to Frenzy, which again, you will only discover at the most inopportune of times. It’s difficult to say exactly what Dark Souls III could potentially introduce to replicate this, but it’d be a shame to limit such brilliant idea to just one game. 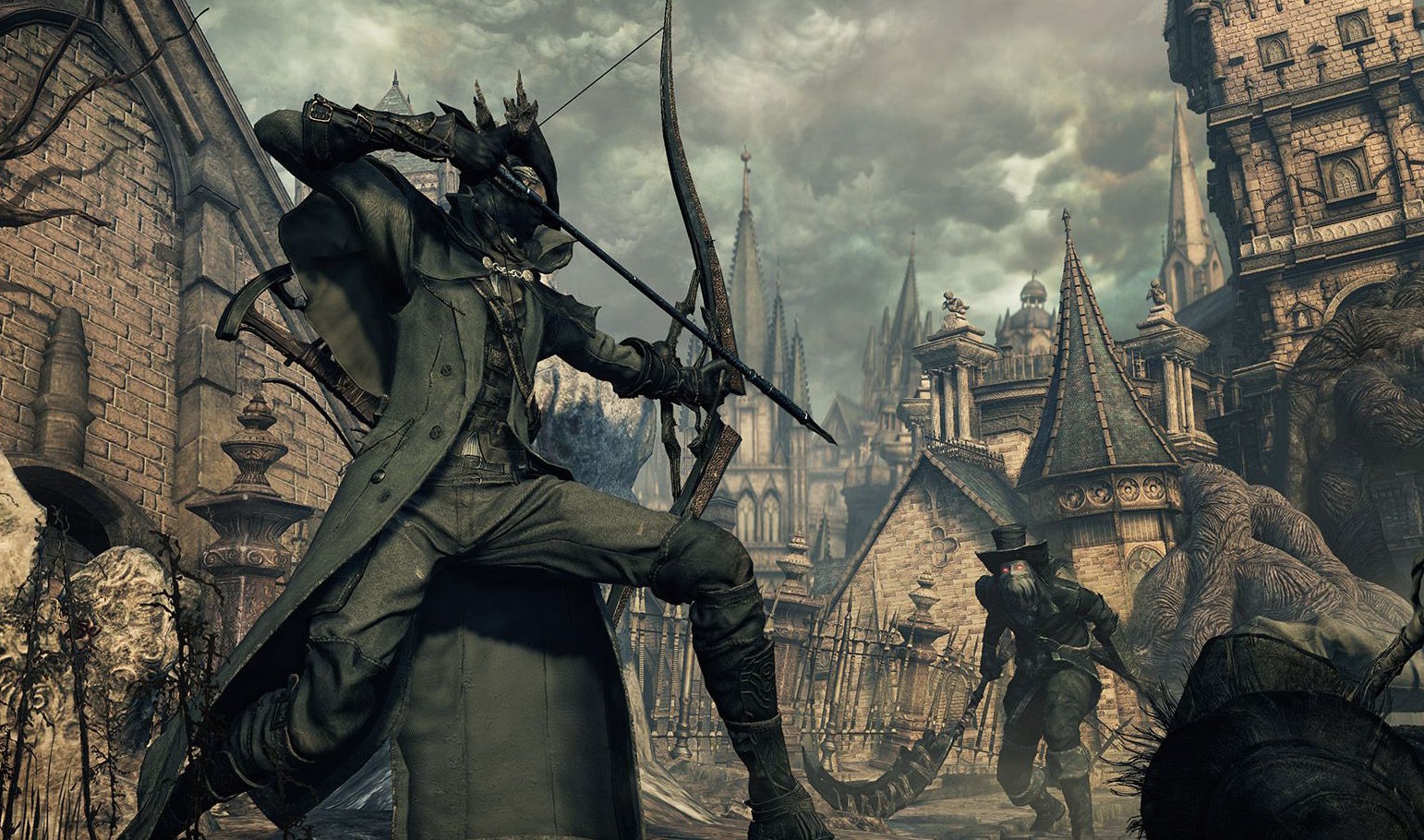 And now we come to one of Bloodborne’s major mechanics that could do with some love in the Dark Souls world. The transforming weapons seem like a simple idea on paper, but in practice add a lot more depth to the combat.

Boiling it down, its merely an extension of the dual-wielding mechanic from Dark Souls that added a little variety to the combat. In the case of Bloodborne however, it greatly influenced your play style from the very beginning. Each weapon feels unique and requires time and patience to fully master. Granted, there were much fewer weapons on offer, but the transformative capabilities prompted players to experiment outside of their comfort zones.

This isn’t to say that Dark Souls III should have these as a large chunk of the arsenal, as that would feel counteractive to the traditional style of play. Having a handful of trick weapons would satisfy any Bloodborne fan and mix up the combat somewhat. Through trailers we have seen that there is something of this nature in adopting different stances with weapons. So hopefully From Software have snuck a few in for us to play around with.

Now, some of these ideas may not be to everyone’s tastes as Dark Souls is a very different game to Bloodborne. Whilst they share similar game mechanics and world design, they are two separate entities that offer entirely different experiences. The two games however should not be mutually exclusive, Bloodborne’s very core is the basics of the Souls series and I’d consider it to be the natural evolution. Therefore to me it only makes sense that Dark Souls III should take elements from its sister franchise to further its own design. Keep the essentials of course; the brutal difficulty, wide range of weaponry and sense of awe all come with the territory, but mix that in with Bloodborne’s ability to frighten and unnerve and you’d have one of the darkest and most brutal fantasy games ever made.