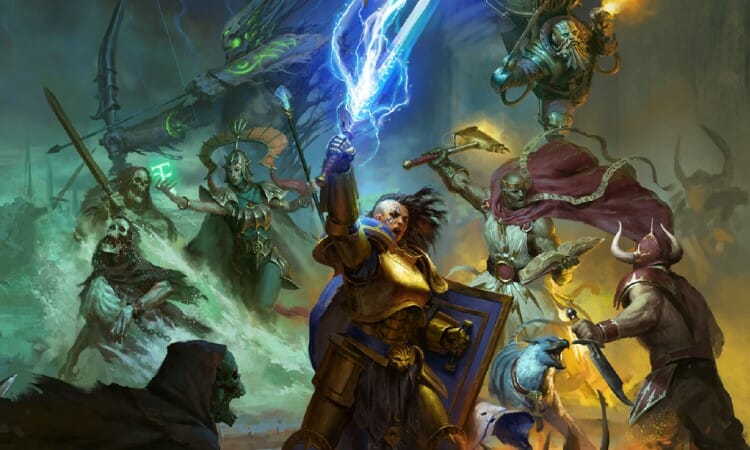 Welcome back table top gamers. Are you ready for your next adventure into a fantasy world? Do you wish to take the fight the evils plaguing the realm? Then look no further. The critically acclaimed Cubicle 7 Entertainment have you covered with Age of Sigmar Soulbound. So, let’s peer into this wonderful TRPG!

What is Age of Sigmar Soulbound?

You are a Soulbound; one of many heroes chosen to be a bastion against the endless tide of Chaos, Destruction, and Death. The Soulbound were created by the Pantheon of Order to serve the Gods but also guard the Mortal Realms. Once faded to the annals of time, they now return to defend the world in peril. Now bound to other Soulbound, your quest begins to stem the flow of Chaos in the name of Order.

As with most table top roleplaying games, you take control of a character to act upon the world around you. You will take on quests, upgrade your equipment for the battles ahead, and seek out evil with the rewards that come with it. By working with your friends/group, you can influence the world and the battles you take. Your success is decided by the roll of the dice.

Meet Some of the Heroes

So who can your alter ego be? There are various races you can choose from. These range from hardy Duardin(Dwarves) of both of fiery might or sky, Aelves of the ocean or blood, living mighty trees of the Sylvaneth, and golden divine warriors called the Stormcast Eternals.

Customise your character by the skills and talents they use, the equipment they wear, and even their goals, appearance, and their backstory. There is something for all fans of RPGs here. Whether you are hungry for battle, seek satisfying and intriguing story, enjoy socialising with other characters of the world, or even a mix of the three.

The digital resources for Age of Sigmar Soulbound are now available on DriveThruRPG. Simply make an account and you can purchase the complete Soulbound game for just $29.99(£24.29~). That’s over 300 pages of material! If you feel you want to own the physical edition, pre-orders are now live. You will also gain the digital resources for free! The physical edition can be found here and rolls in at the standard RPG price of £44.99.

And that’s your lot for now. The physical release for Age of Sigmar Soulbound is tipped for a quarter 4 release. However, why wait? Grab you digital resources and gather you friends for an epic adventure against the forces of Chaos! Be sure to head back soon as we feature a sample game to show off the mechanics in the form of a short story. Stay tuned for more news, reviews, and guides. Until next time, smile and game!