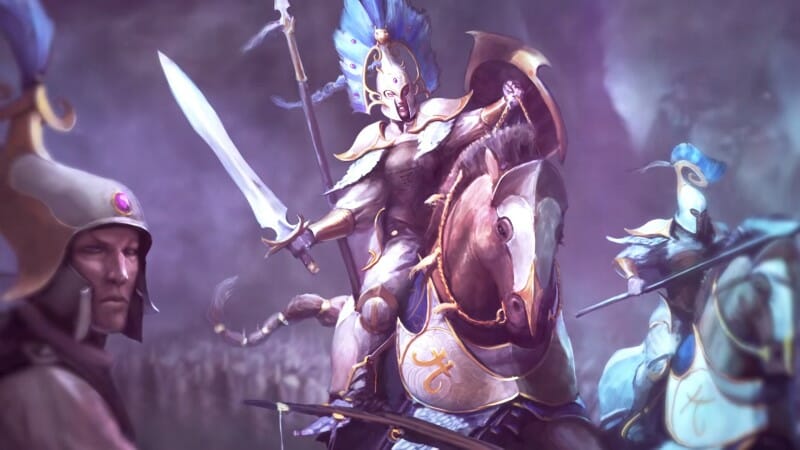 Welcome back avid tabletop warlords! The Las Vegas Open has concluded over the weekend and with it comes some marvelous reveals. Join us as we delve into the 41st millennium and Age of Sigmar and see what has been unleashed!

First up is the Adeptus Mechnicus. The cavalry has arrived! Quite literally. In the reveal, 3 new units were granted permission to grace the battlefield. This support comes in the form of Serberys Sulpurhounds and Raiders. These cyber beast riding soldiers grant aim to provide quick answers on the tabletop. Need an objective taking and/or enemies slain, these are your troope!

Another unit permitted to join the fray is the new air support unit, the Pteraxii. Also giving you dual assembly options, these winged reavers give you access to aerial assaults to pick off targets. The last piece of information in the reveal was a series of binary. This is translated to April, the month of release.

Opinion. These new units can add some very useful additions to a Adeptus Mechanicus army. The higher move capabilities can allow access to more skirmish and objective taking opportunities. For 1000pt+ armies, this opens up great customisation to for the army lists.

Are you ready for Waaagh! You better be. The great prophet of Gork and Mork, warlord of the Goffs, and all round green skin legend Ghazghkull Thraka is back! There is no Ork more influential than he. Thraka has smashed Elder, stomped demons, and crushed worlds with devastating crusades. No date on this yet but, it does beg the question, will his nemesis Commissar “Bale Eye” Yarrick follow to slay the “Beast of Armageddon”?

Opinion. Even though only one model has been revealed here, there is so much potential for a cascade of new content. This could bring about, as mentioned above, Commissar Yarrick making an appearance. Also, re-sculps of existing Ork units such as the standard Boyz or Nobz. Exiting!

Behold, The Silver Host of the Lumineth Realmlords

The pointy Aelves have been teased for a while now. The destruction of the old world at the hands of Archaon Everchosen lead to the accent of the high Aelf Teclis. Now home to Hysh the Realm of Light, the High Aelves are even more high and mighty.

The Lumineth Realmlords grace the tabletop with beautiful new sculpts. In this reveal, Vanari Dwanriders, Vanari Auralan Wardens, The Light of Eltharion, and the now God Teclis accompanying Celenar, Spirit of Hysh an appearance. They all seem fit for a Start Collecting Box or a new Starter Boxset such as the Feast of Bones did last year. Only time will tell. Our hopes is that there will be more dragons. Everyone loves a good dragon!

Interestingly, one of the heroes/leaders of this new force is hollow. “A Hero Reborn” was stated in the reveal trailer with magical flames living and wrapping around the figure. It would be nice if you have the option to build the model with or without the flames. Only time will tell as they are due to reveal more Lumineth forces in closer to the release with a new Battletome. Again, no release date for this one yet.

Opinion. This reveal is bringing so much excitement. But, it hods so much more on the horizon. The sculpts are fantastic, the aesthetic is gorgeous, and the prospect of more Vanari units coming in the future is great news. Also, considering Slaanesh has some influence in Hysh, it could bring about more Slaanesh units. Or, even a campaign against Archaon Everchosen, the one who destroyed the old world.

Scaled Refugees Get Some Love!

For the celestial demon lizard lovers out their, rejoice. On the horizon there will be a new Battletome for the Seraphon as well as a new terrain piece. This monolith is huge and can only provide wonderful power to your forces. Hopefully, this will be the beginning for more support in addition to these ones. Keeping the kindles of forces afresh is nice for fans of these factions after all.

Opinion. The new terrain looks amazing. A new battletome is very welcome. Our hope is that new units will be on the books, no pun intended, in the near future. Maybe a couple of new heroes and heavy hitters. Only time will tell.

For the Warhammer Underworlds fans, a new warband is coming. The Wurmspat will be representing Nurgle, the God of Decay, in exciting, skirmish action in Breastgrave. As with any Nurgle unit, it would be likely that these guys will be tough and will make your enemies itch and squirm.

Opinion. An extra warband is always a welcome for Underworlds and Breastgrave. A collection of tough Blightkings and what looks to be a Nurgle Sorcerer seems to be a terrifying combination. This is definitely one to add to your collection!

Lastly, more content for Blackstone Fortreses. This addition hasn’t been dabbled with since Warhammer 40k 1st Edition back in 1987. A slave race to the Tyrannids, the details of their extinction were given in 3rd Edition, the Zoat is now coming back… or maybe just the one. This one will be coming to flip the table in your games soon.

Opinion. As a person who has not seen or heard about a Zoat before, this reveal is very exciting. Learning about the chronicles of the past, new lore that can come from it, and a model to represent it all is awesome. Who knows, if this release is popular enough, a resurgence of this once thought to be extinct race could be afoot.

And that is your lot everyone. There are a lot of marvelous reveals from the Las Vegas Open. Let us know your favourite in the comments below. Stay tuned for more news, reviews, and guides. Until next time, smile and game!