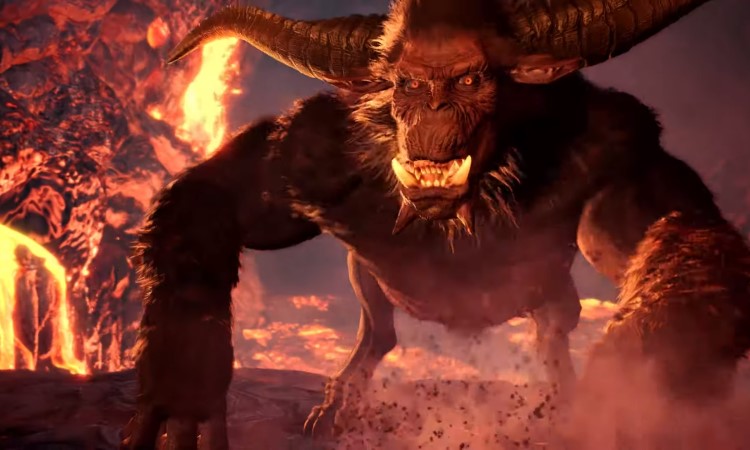 Welcome back hunters. Are you ready for the mighty and ferocious Rajang? Well he is here! From 10th October 2019, the raging Rajang will be hitting the New World and any hunters who wish to challenge it. But, what else is over the horizon? Join us as we discuss the updates discussed from the latest Monster Hunter World: Iceborne Developer Diary.

First up, let’s talk about Rajang. The hulking, twin horned, ape like beast was first featured in Monster Hunter 2. It wrecked face and posed a considerable challenge to hunters back then. Now, the developers are sharing insights on what you can expect when you face off against this juggernaut. They have added a few new moves since its last iteration. Not only that but, as mentioned in the diary, in its base form it will not fall for pitfall traps. Also, when its enraged and turns golden, it will gain the ability to destroy shock traps. Pretty mean!

For the equipment, the developers mentioned they wanted to fully show off the golden fur of the monster. This will be a slightly different look to the original. They mentioned they want a Kabuki like feel to it. Not only that but the armour is supposed to have synergy with the weapons that can be crafted from the monster. Combined with the offensive skills accompanying the armour and you can expect to dish out some hurt!

Next up is the guiding lands. Accompanying the new brute is a new locale to explore. The Volcanic region of the Guiding Lands will harbour all the lovely monsters that you would find in such heated environments. Two that were featured was the Brachydios and the Dodogama. This new region will also bring new materials to gather for custom weapon upgrades and for the additional content discussed below.

Another note that was discussed was the feedback from fans regarding the Guiding Lands. The development team commented that they are grateful for all the comments both positive and negative. They are also looking into improved the area to enhance its features and the enjoyable experience it gives. These improvements take the form of monster appearance and they frequency, tweaks to luring and scout flies, and other refinements aimed to improve fun and gampeplay.

A move that caught us by surprise, but have wanted sooo much, is the addition of more Layered Armour. But, not just any Layered Armour. This update will bring the armours from Monster Hunter World, pre-Iceborne, into the fold. From the Great Jagras and onwards these armours will now be available as Layered Armour. Super awesome!

To craft these new armours, of which we want all of them of course, you can go to the trusty Smithy at The Forge. These new looks will cost you materials as expected. However, these materials can be found in the Guiding Lands. So, gear up and level up those areas everyone!

Those who are seeking more challenging endevours look no further. Are you finding the Gold Rathian and Silver Rathalos fun but not hard enough? Great. Your lust for battle will be quenched for that little bit longer. Coming the game is the Tempered versions of these iconic monsters. Investigate enough and they will appear for you to hunt. Not only that but, if you defeat them you can gain some new rewards from them. The dev team were vague on what the rewards are but, they did say you “will be handsomely rewarded”. Ill trust their judgement on that one!

Sometimes you just want to chill with your group of friends before heading out to hunt. There is only so much comparing equipment and stats you can do. However, with the new update you can visit each others Hunters Room. You can also set privacy settings to be more of a invite only system. You can now show off you character in a new way.

Also included is the new features for the room. These include a music player that can be found on the second floor or be changed with the house keeper. Play your favourite songs from the game with more on the way in future updates. There is also an armour display to show off what monsters you have bested, as well as monster figure decor items. The first figure is free which is the Great Jagras. Paid additions will be coming soon.

Lastly, the developers discussed future updates and their road map. In November, which was talked about in our previous title update article, will include a Resident Evil collaboration. More details have been revealed for this of which the new Handler skin and themed music for the music player will be paid content.

Also in November are the design content equipment, new paid monster figures, and the first set of Horizon Zero Dawn content. This content will feature a themed Pendant and a new Light Bowgun. This will be followed up with December content. In December you will be able to upgrade the new Light Bowgun, including an exclusive action, as well as upgrade previous Horizon content up to Master Rank. Not only that but the Banuk Armour Set will be available for hunters as well as 3 Pendants, the Aloy Shield-Weaver Full Armour Set, and new Palico equipement.

The last note was tending to looking forward to further updates in the future. This includes a new monster to hunt in December, which all details are shrouded in mystery at the moment, as well as the return of Astera Fest.

And that is your lot! Thank you for reading. What are you most excited about with the updates to Monster Hunter World and Iceborne? And which Layered Armour will you be wearing? Let us know in the comments below. Stay tuned for more news, reviews, and guides. Until next time, smile and game!