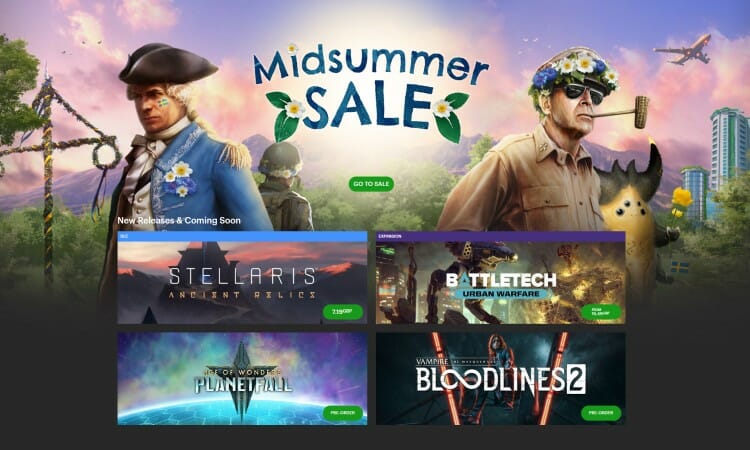 Welcome back hunters of bargains. Are you looking for a new game to sink your teeth into. Or, do you want to breath new life into an existing game? Well, if you are a fan of Paradox Interactive then this is for you. Join us as we give a brief overview of the Paradox Midsummer Sale!

Nothing beats the feeling of busting open a new game. The anticipation as is installs and the intro cinematic plays. For the Paradox midsummer sale for PC, Mac, and Linux, there are a selection of base games on offer. This includes the award winning Surviving Mars. Guide your colony into colonising the red planet from early settlement camps to thriving cities. Grab it now for £9.18 which is over 66% off.

Other titles include Stellaris. Recently released for consoles, this Sci-Fi empire management game tests your ability to secure your races standing within the universe. Initiate diplomacy with other races or just blow them off the galactic map. Not bad for £8.75, originally £34.99.

Fancy a solid RPG instead? Then Pillars of Eternity might be what your looking for. Developed by Obsidian Entertainment, the team behind Fallout: New Vegas, puts you in a high fantasy setting where you lead a group of adventurers. Explore dungeons, discover wonderful loot, and craft your character. This one is 50% for £13.79

Other titles include the mech warfare turn based strategy, BattleTech, and the city building simulator. Needless to say, there is bound to be something for everyone.

If you already have a base game from Paradox that you are really enjoying but, fancy enhancing it then why not look for a DLC or and expansion? Expand upon your masterpiece of a city with green additions in Cities Skylines. Or would you like to dabble with one of the 13 expansions to Crusader Kings, adding new elements to your campaign of domination.

Other interesting acquisitions could be official sound tracks and digital art books. Adding to your music and art collection is always something to be enjoyed. So, why not have a gander and pick up something today. The sale ends 27th June 2019 17:00 CEST and can be found on the Paradox official store. Let us know in the comments below what your bargains are. Until next time, smile and game.

An exciting look into Age of Wonders: Planetfall
Powered by Magic