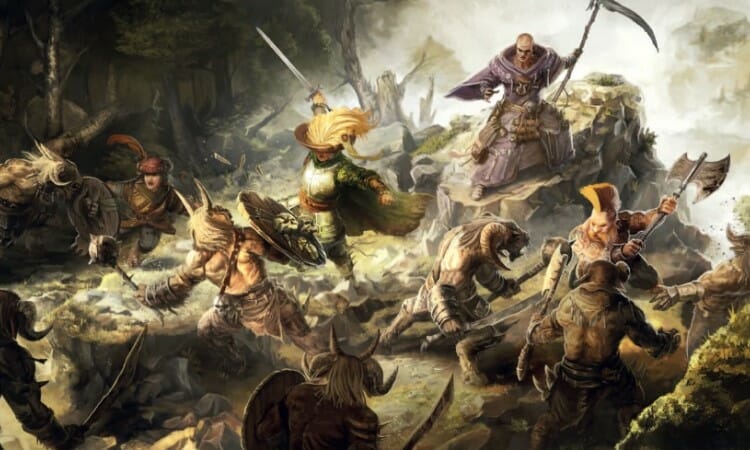 Welcome back table top gamers. Join us as we delve into the rich and vibrant universe of Warhammer and preview the 4th Edition Starter Set by the fantastic team at Cubicle 7 Entertainment. We shall discuss what is included both in the digital and physical versions, and how to start your first game. So, let’s get adventuring!

So what is Warhammer Fantasy Roleplay (WFRP)? You and a group of friends play the roles of your alter egos in a fantasy setting. This setting is the Old World. More specifically The Empire, a great bastion of man that serves to protect against those who would bring ruin to the dominion. As your alter egos, you all have your own interests, goals, and skill sets. You can influence the world as you see fit. But, the weave of fate will bring you together and turn you into heroes in one form or another. The success of which is decided by the roll of the dice.

In both the digital and physical versions you will receive the Adventure Book. This is the best way to be introduced the WFRP. As you and your friends delve into the wonderful world that is laid our before you, the book will guide you in your first games by showing you the ropes with intuitive, rule demonstrating encounters. These might be combat, social, investigatory encounters or a mix of all or other elements.

The first adventure presented to you and your friends is called Making the Rounds. It takes place in the Empire, more specifically in the fortified river town of Ubersreik. As a brief summary, the players are caught up in a riot and accused of being apart of it. During the trial, the judge is convinced to allow the players to work off their debt by serving as part of the Watch. By patrolling the streets of the town, under the watch of Sergeant Rudi Klumpenkulg the players can help as little or as much as they like. But, the patrol becomes dangerous when tasked to escort a criminal to his execution with difficult choices to follow.

Also in the adventure book are other scenarios for more experienced players. This is great for the mixed party ranging from no experience to the veterans. Regardless of the scenario and player level, throughout the adventure, the book will guide the players through the Game Master (GM), the person who will run the game. The GM is the referee, narrator, and rule guide for the party. Each encounter will provide all the narrative, skills check information, and character material the GM needs to help the party and keep the story and fun going.

For those who love rich worlds and vibrant history, there are several resources available to the players and GM. The Guide to Ubersreik provides oodles of content including the history of the town and surrounding area, details of the different sections of the town and what you can find there, the ruleship, as well the cults that may or may not exist. You can utilise as much of these glorious details as you work in your game. Whether it be passing conversation between players or non-playable characters (NPCs), or even actively pursuing ventures deep in the town, you can make it your own!

Other resources that available to the players and the GM are the maps. These handy tools are very useful in knowing where the party might be in relation the town and local Duchy. If the players want to find a blacksmith in between ventures they can look to see where the merchant quarter is or ask the GM. The GM might ask them the roll the dice to see if they can find their way round the bustling streets and ask around for specifics but, the maps are there for a nice reference.

Alongside where you are and where you will end up, there is the important matter of who you are. There are 6 playable characters in the starter set. These are characters have been crafted by the awesome team at Cubicle 7 Entertainment. They provide a varied selection of personalities of different backgrounds, skills, abilities, and personal goals. You can adopt the role of any of these character and act upon the world with your friends in a way you feel that character would.

The question is, who can you play? The usual tropes exist for players to choose but, with little twists here and there. Salundra von Drakenburg, the rebellious daughter of Duke von Drakenburg, is your typical military leader, melee role. Being a noble allows the part to explore in parts that would not usually be available to them. She also has a good moral compass.

Another melee character available to play is Gunnar Hrolfsson, the slayer Dwarf. This burly, axe wielding, red haired Dwarf is an angry, troubled fellow who is a force to be reckoned with but, is also very honourable. He wishes to removed the stains left by past tragedies and find purpose. Gunnar also isn’t opposed to a drink or two… or three.

Other individuals include the golden ray of sunshine Molrrella Brandysnap the Halfling Thief. The carefree personality brings people together. But, when the time needs it, a door might need unlocking or a certain charm can lead the way. Do you want magic but are not comfortable yet with roleplaying? Ferdinand Gruber might be for you. A loyal, yet sarcastic, Human wizard can provide that much needed magical muscle and intellect to the party. Magical projectiles ahoy and casting light in the darkness cant go a miss.

Will all these character options, their backgrounds, a brief description on why you would want to play them, and if you decide to play them, a complete character sheet with all their skills, equipment, and talents. There are also the options to start with a few secrets and ideals that net you some benefits by doing so.

So after all this talking about the game, what is there left to do? Pick up a copy of course! If you do opt for the digital version, it is recommended to pick up a set or two of 10 sided die and a few tokens. The die allow you to roll for skills checks and to see how successful you are acting upon the world. The tokens allow you to track conditions on characters etc. You can purchase the Starter Set from Cubicle 7 Entertainment’s official store.

And that is your lot! Are you are wishing to sink your teeth into a brand new world oozing with rich stories, engaging gameplay, and compelling characters to interact and play with? Grabbing this with your friends around a table is definitely for you. Check back soon as our team delve into such adventures and give you a sneak peak into playing the game. This will include the narrative, the dice rolls, and hopefully hard earned victory drinks at the tavern. Stay tuned for more reviews, news, and guides. Until next time, smile and game!