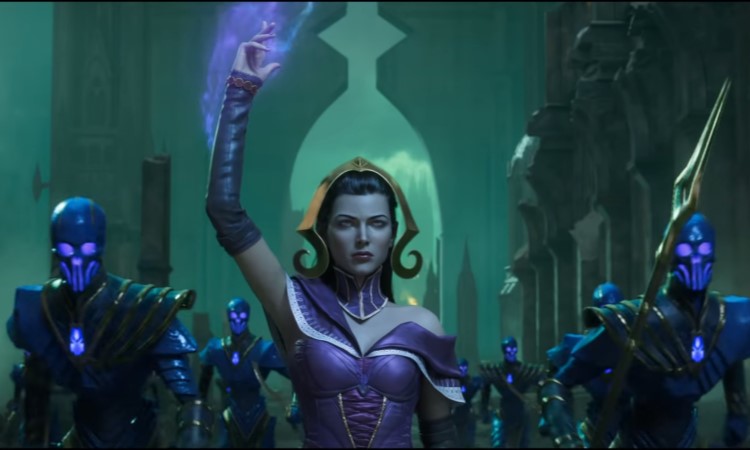 Welcome back fellow planeswalkers. Join us as we delve into the upcoming Magic the Gather set, War of the Spark, and the new trailer that was released with it. We shall discuss what to look forward to in the story and what is featured in the trailer. So, shuffle you deck, place you lands, and let’s get started!

In an impressive and soul churning trailer, the fantastic team at Wizards of the Coast have teased the next chapter in the story. War of the Spark is tipped to feature 36 Planeswalker cards accompanied by a bountiful and magnificent narrative and events. The entire multiverse is at risk with the candles of many planeswalkers ready to be snuffed out by the dragon god Nicol Bolas. The battle for all that exists is about to begin.

So what do we know up until this point and from the trailer? Well Liliana Vess made a pact with four demons to enhance her powers and sustain her youth. By killing the four demons, believing she would be free from the contracts, she would be free. However, the contract is still in effect as Nicol Bolas instigated them in the first place in a bigger power play and game. This means, to go against the dragon god is to break the pact thus sealing her fate and casting her to the dust.

In this epic fight to determine whether the planes rise to freedom or fall to a dragon claws control, the trailer shows a turn in the war. The Gatewatch, a band of planeswalkers, of which Liliana is part of, serve to rid of tyranny and of Nicol Bolas, have all gathered on the world spanning city of Ravnica. This was the dragons plan all along, to rid them all in one spot by laying siege to Ravnica with an army of warrior Eternals.

Liliana the Necromancy, commanding a legion of Eternals turns on her master to break the chains of her fate and a possible fate of the multiverse. Seeing a young boy and girl die, bringing back memories of failing to protect and cure her brother, gains new resolve. Powered with renewed conviction, she is ready to sacrifice herself for the greater good and control her own fate.

With all that said and done, it leads into some very exciting times for Magic players for lore, the future of planeswalkers, and the cards to collect. The pre-release is due to hit April 27th-28th which is a little under a month away. It is sure to leave its mark on all who participate and the story will leave some characters behind in this epic battle between justice and villainy.

That is all for now Magic fans. Let us know what you thin of the trailer and who you think will survive the clash. Stay tuned for more updates and a break down of theSet featured image set nearer the time of release. Until next time, smile and game!