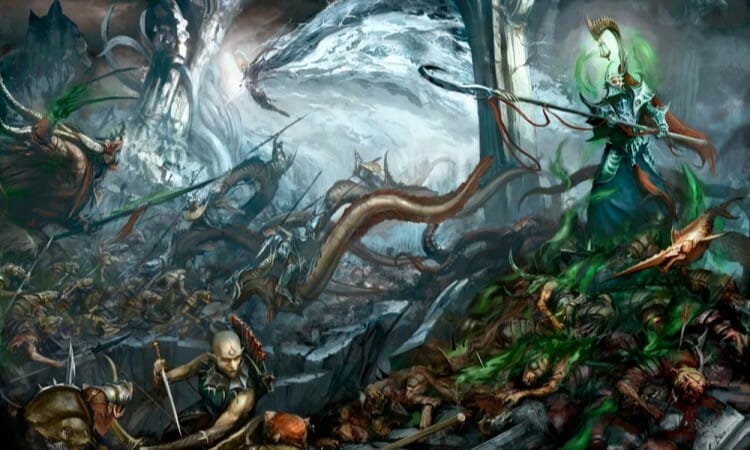 Welcome back tabletop fans. With an exciting year ahead for Games Workshop, the reveals for both 40k and Age of Sigmar will be gracing thick and fast. This time, two new Start Collecting Boxes have been announced for Age of Sigmar. So, join us as we have a look at them both, give our first impressions, and see how you can expand your collection from there!

First off, lets look at the elvish warriors of the whirling deep, the Idoneth Deepkin. In their new Start Collecting Box it features a Isharann Soulrender hero, 1 unit of Namarti Thralls, and 1 unit of Akhelian Morrsarr Guard. No price listing yet but, the total value of box when comparing to the individual pricing is £75. This is more than likely going to offer good savings than purchasing them individually.

Now, how does this box rate in terms of starting your collection? In short, whether you are new to wargaming/Age of Sigmar, this offers great value and gameplay coverage. As with any Start Collecting Box, it aims to provide a starting point to build upon but also allow you to play straight away with a small force. More specifically, this one grants you 400 points of units.

For a more in depth view, the units included provide good coverage on the battlefield. The Namarti Thralls are good against hordes which increases their attacks to 31 or increasing their weapon damage by 1 against 4+ wound enemies. As for the hero unit, Isharann Soulrender, they can revive slain friendly models and is geared towards taking out enemy heroes. Lastly, the cavalry unit, of Akhelian Morrsarr Guard have an incredible movement of 14″ and can obliterate units with vicious charges. Overall, the box contents are well valued, well rounded, and very fun to use on paper!

So, how do you build upon this starting point? For the casual, small scale player, you can lean more towards the new skirmish rules detail in the January-February issue of Warhammer Magazine: White Dwarf. With small task forces you can blitz your way through very fast and fun games with just a handful of units. By picking up a new hero or a unit of Namarti Reavers, you can breath new life and new options into your war band adding endless hours into your game.

But, what about if you want to go more into the competitive/pitched battle route? Well, for starters, picking up a second start collecting box wouldn’t be a bad idea! Two Thrall battlelines and the strike force of Akhelian create awesome hammer and anvil opportunities. Throw in a couple more heroes, a King maybe, or even a couple of devastating Akhelian Allopexes and your 1000 point army is ready to go. From there, the Battletome can provide you with guidance on any battalions and their abilities you could aim for.

On the other side of battlefield now and the Maggotkin of Nurgle. In their Start Collecting Box it contains a Lord of Blights hero, 1 unit of Putrid Blightkings, and 1 unit of Pusgoyle Blightlords. Again, no price listing as of yet but, the total value of this box is £88.50. This is even more value than the Idoneth Deepkin box which is great!

Does this fair better or worse than the oceanic elf contingent? In short, it is just as good! Both boxes are very balanced and have great value. For this one particularly, it offers great insight in to holding the line and fighting with a small but incredibly resilient force. It is definitely earning the title of Start Collecting box and it gives you 520 points of units.

Looking into it more deeply now. The infantry unit of Putrid Blightkings are slow rolling wall of death. Not only do they have a total wounds of 21, an ability to damage enemy units whilst healing allies, but also dealing D6 hits on a hit roll of 6 for attacks. With the Lord of Blights, the Blightkings can gain the missile attack from the hero in the shooting phase and are more difficult to be hit by missile attacks from the granted ability. Combined with additional healing and resilient assaults from the flying Blightlord cavalry, the battalion is ready to hit the battlefield.

So, how do you progress from here? As with the Idoneth box, the casual players can really gain a lot of value here with the skirmish games and path to glory. The Putrid Blightlords are very tough and hard to deal with especially in small scale games. Throwing some Plaguebearers and holding objectives become a lot easier.

If you are looking to expand your collection and hit the 1000 points then pick up a second box. A nice battleline of Blightkings can never do any harm… at least not to you that is. It would also be a good idea to invest in some Plaguebearers, Feculent Gnarlmaws, and the Battletome. By accumulating the contagion points from the summonable Gnarlmaws you can allow your units to run and charge. This makes for some lightning assaults with the Blightkings and Blightlords. The rest is just supplementing your army with another hero or two, such as the Lord of Plagues, and possible a battalion for wicked abilities.

The announcement of these two Start Collecting boxes is a welcome sight indeed. They both host a good selection of units and are both provide good value. The favour is slightly with the Idoneth box for a slightly better return on a two box purchase. But, other than that, friends picking up one each of these can have oodles of fun straight away. Awesome stuff!

That is all for now wargamers. With Start Collecting box is your favourite out of the two? Let us know in the comment section below. Ours has to be the deep sea raiders, the Idoneth Deepkin! Stay tuned for more Warhammer articles in the coming weeks. Also, keep check back for more news, reviews, and guides. Until next time, smile and game!

Soulbound Shadows In The Mist Preview
Powered by Magic